EWTN will start on Macau Cable channel 28 from August 15 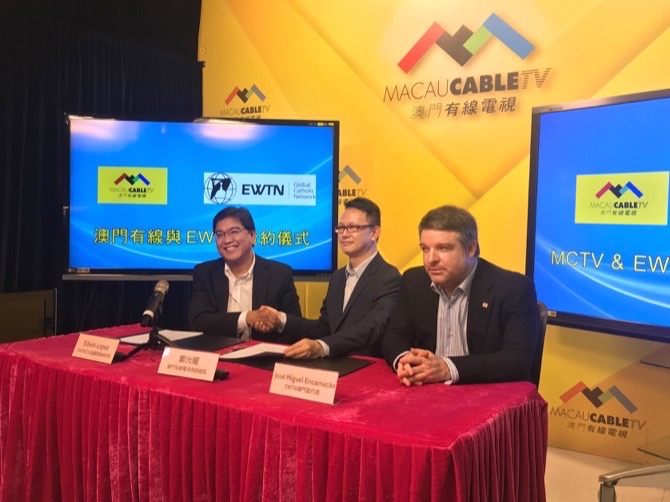 Eternal World Television Network (EWTN) will start to broadcast in Macau through the Macau Cable Television Company Limited (MCTV) on channel 28 from August 15. The date marks the 38th anniversary of the channel’s founding  in Alabama, the United States.

At an event held yesterday at the MCTV headquarters where the EWTN and the MCTV formally signed the agreement, the International Marketing Manager of EWTV for Asia-pacific, Edwin Lopez, said that the company had already reached an audience of around 300 million television households.

In reply to the Times, Lopez explained that the idea of coming to Macau comes from an old wish of the founder, Mother Mary Angelica, a Saint Clare nun who expressed the desire to visit China in 2001.

“The idea [to start in Macau] came from José Miguel Encarnaçāo,” who will be the local coordinator of the project, said Lopez.  “Today, we are here to sign this agreement and hope to be able to bring the Catholic faith to as many countries as possible,” Lopez said.

Questioned also by the Times on how many viewers he expects to have in Macau, the TV executive said, “we don’t know, we are solely relying on divine providence.”

“We hope through the Macau Cable TV platform we can reach a fair number of Catholics who wish to be nourished with the Catholic faith.”

EWTN is considered the largest religious media network in the world, broadcasting in 145 countries and territories in multiple languages with 24-hour-a-day programming.
For the Macau operations, Encarnaçāo told the Times that the channel will be initially broadcasting content in English but in the near future it was looking to the possibility of including content also in Portuguese.

English would still be the main language, the EWTN Media Cooperator for Macau said, adding, “the content in Portuguese should have subtitles in English and there is also the idea of subtitling some of the English content in Chinese.”

At the initial remarks, Lopez also noted the importance of a channel that is now a worldwide broadcast service but that was born in a garage with an initial budget of just USD200 (about MOP1,600).

Questioned on a separate issue, the Chief Commercial Officer of Macau Cable TV, John Chiang, said that following the renewal of the concession of the Macau Cable TV which was recently granted by the government for a further five years, the company will soon offer “new Japanese channels and even some from Turkey.” Chiang also remarked that most of the current offerings in pay-per-view channels would be maintained.

As for the possibility of including on the MCTV portfolio live streaming content over the Internet, commonly known as “Over the Top,” Chiang said that such a possibility is being considered by the company.