They are strikingly young, but emphatic that they should not be considered newcomers. Rather, they are claiming the mantle of Old Europe at its most traditional.

Several of this year’s far-right candidates in Europe are well under 30 — as are some of their most ardent supporters. In Belgium, the telegenic Dries Van Langenhove, who is among the top picks on the list for the far-right party Vlaams Belang, is 26.

In France, the head of the National Rally slate for the upcoming European elections is 23 and has been a card-carrying party member since the age of 16.

In Denmark, the lead candidate from the Danish People’s Party is a 29-year-old who is already a veteran campaigner.

And in Spain, the chief spokesman for the Vox party is 27 and was elected to parliament last month.

These candidates are part of a growing attempt by Europe’s far-right parties to gear their anti-migration, Euroskeptic message to the young, with everything from beer nights for adults and bouncy castles for kids to an outsized presence on social media, the Associated Press has found. 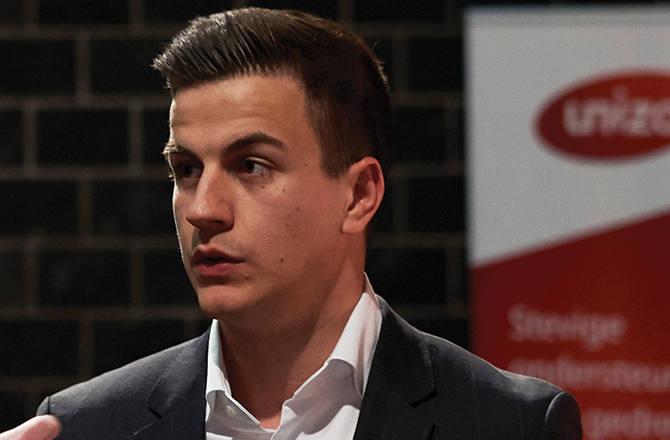 Young European voters are responding with a rightward shift faster and farther than their elders — as illustrated by voting results or party rolls from Italy, France, Spain and Austria. The trend could have major implications for this month’s elections , which decide the makeup of the European Parliament as well as some national governments, as in Belgium.

“The far right has made a very explicit effort to pander to younger audiences. They’ve essentially rebranded themselves,” said Julia Ebner, a researcher with the Institute for Strategic Dialogue , a left-leaning think tank. “Far-right political parties have been most active in engaging with social media users.”

The far right has succeeded at picking up on existing grievances and fears among young people and at using their language and cultural reference points, she said.

It’s a significant change from where the far right found itself in Europe’s postwar era: identified with the Nazis and a Holocaust that killed 6 million Jews, marginalized by governments and eclipsed by a unifying Europe. Opponents say today’s far-right candidates have given new window-dressing to old racist beliefs and an implicit call for violence, pushing a pro-Christian, anti-Islam ideology that Belgium’s security services describe as “extreme right in a white collar.” Only now they’re appealing to a demographic with no memories of where extremist beliefs once led the continent — to a world war that left almost all of Europe in rubble.

Every country defines and measures its young voters slightly differently. But the trend is unmistakable. 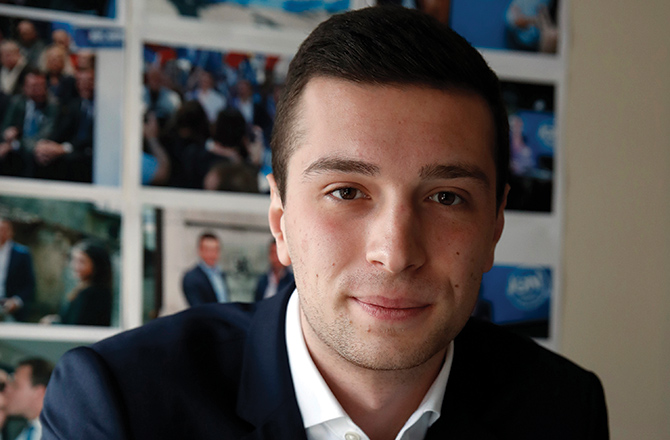 Across Europe, the right has gained ground with the electorate in general, but its strength among young voters who traditionally lean left has come as a surprise, according to poll estimates. In Italy, 17 percent of voters aged 18 to 34 voted for the League in 2018, compared to just 5 percent in 2013. In Austria , 30 percent of the youngest voters chose the Freedom Party in 2017, up from 22 percent in 2013, making it the most popular party among those ages 16 to 29. And in Germany , the AfD’s gains were notable while support from the youngest voters for the Green Party barely changed. France’s vote showed similar trends.

Belgium’s Van Langenhove has 31,000 Instagram followers and a strong presence on social media. Until recently isolated as racist by the rest of the political spectrum, the Flemish independence party Vlaams Belang whose slate he leads in Flemish Brabant has a handful of seats in the parliament and a plan to more than double that.

Van Langenhove is also the leader of Schild en Vrienden, a Flemish nationalist movement known for anti-immigration stunts and named in Belgium’s annual report last year on extremist groups as national security concerns. The report did not accuse the group of violence but noted that the movement “deserves our attention.”

On a recent spring holiday in a historic park, Van Langenhove’s larger-than-life photo was plastered across the Vlaams Belang campaign vans. They were parked alongside the cars of thousands of party supporters and their children, who split their time between anti-immigration speeches inside and an outside festival that included face-painting, bouncy castles and a stand for the book “The Kidnapping of Europe.” 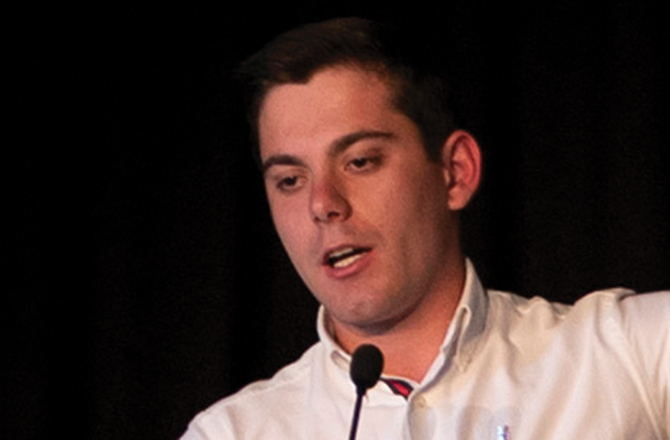 Louis Beernaert, 27, has been coming to Vlaams Belang meetings with his father and sister since he was a child. Now his sister’s husband and their toddler have joined also. They were all in favor of the party’s new faces, which include its 32-year-old president, Tom Van Grieken.

“It needed to get younger,” Beernaert said. “Their ideas are the same, but they say them in a less radical way.”

Van Langenhove, who holds his torso like a boxer, posed for selfies and chatted with party leaders sometimes decades his senior without a flicker of deference.

He avoids direct discussion of race in favor of what he calls identity. But he routinely posts on social media about “replacement,” a term used by white supremacists in the U.S. and Europe for the idea that European populations are being culturally and ethnically replaced by minorities. “Our People First” is the Vlaams Belang slogan.

Even though migration to Europe has slowed to a trickle, the continent is still grappling with the after-effects of the hundreds of thousands of people who arrived in the past few years alone. Belgium’s foreign-born population went from just under 12 percent to nearly 17 percent between 2006 and 2017, not including people who slipped in illegally. In France, asylum requests last year topped out at 123,625 — an increase of 23 percent from 2017, when they had already risen 17 percent.

In repeated surveys of young Europeans, including one released this month by the TUI Foundation, migration and asylum are described as Europe’s most pressing issue. The environment comes in a distant second.

Vlaams Belang’s decision to name Van Langenhove came after the Belgian network VRT linked him to racist and sexist messages in closed chat rooms. He dismissed the show as a “smear,” but it prompted protests at the Ghent campus where he was studying law and got him banned briefly. Later, he was suspended from Facebook for content that violated the social network’s terms of service. He is now more circumspect online and in front of the camera.

“Everything is on the table right now, it’s an all-in game. And that’s why more young people are taking the risk of associating themselves with right wing nationalist groups and organizations,” he told The Associated Press. “Young people are right in the middle of the problems. Older people, they move to the countryside, they move to areas where there’s not a lot of foreigners. But young people have to move to the cities for their jobs, for their education.”

Jobs are a sore point, with youth unemployment at around 15 percent in Belgium, just above the European Union average, and 20 percent in France. Vlaams Belang is hoping its message of economic protectionism will help the party, which has forged links in France with Marine Le Pen’s National Rally party as well as the loose far-right alliance that includes Italy’s League, Austria’s Freedom Party, Britain’s UKIP, the German far-right AfD and the Danish People’s Party.

In March, the young far-right leaders from all those parties and more gathered in Rome, where a 23-year-old raised by a single mother in a suburban Paris housing project was one of the stars. Jordan Bardella’s brief speech to a young audience hit many of the same notes as Jean-Marie Le Pen’s from decades ago.

“Another challenge of our generation will be immigration. Confronted with the demographic bomb that is Africa, it is the survival of our peoples, our civilizations, our Christian roots that is at stake today,” the National Rally candidate tweeted on March 29 .

Marine Le Pen re-branded her father’s far-right National Front party as the National Rally after losing the presidency to Emmanuel Macron in 2017. Despite the loss, she made important inroads among young French voters over her previous attempt in 2012, easily outstripping all the traditional parties in polling among the young as well as the far-left candidate. She clearly took something away from the experience. The head of her party list this year is Bardella, an acolyte who joined the National Front at age 16 and swiftly rose to lead its youth movement and that of its successor.

Bardella is nearly as explicit as Van Langenhove about the young leading the way against waves of mass migration and rules from Brussels. While Van Langenhove used a medieval Flemish castle in an elaborate stunt against pro-migrant activists, Bardella uses Old France as his backdrop — casks of Cognac, golden fields, even the classic French comic book characters Asterix and Obelix . He is growing increasingly confident about campaigning on his own, especially with recent stumbles by Macron’s party.

That is exactly what Pawel Zerka fears. A researcher with the left-leaning European Council on Foreign Relations, he said the mainstream parties have barely made an effort to appeal to younger voters, seeing them as a lost cause because so few actually turn out. 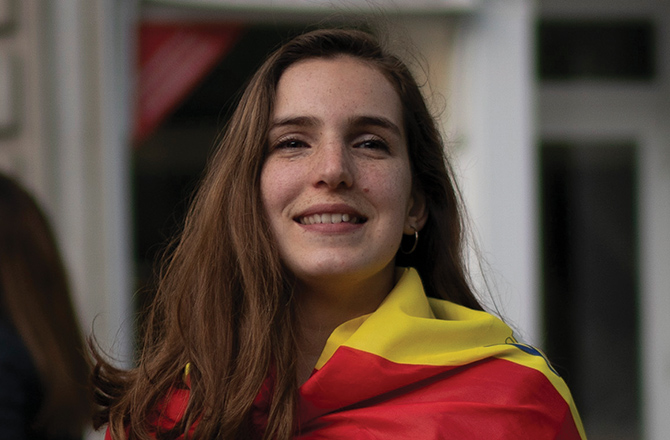 The far right is stepping in. In Denmark, Peter Kofod, 29, has risen steadily since his first election in 2014 to city council. The following year, he became chairman of the youth wing of the anti-immigrant, populist Danish People’s Party, which drew votes from a fifth of young voters.

In Spain, Vox’s gains have come at the expense of traditional conservatives, who were slow to counter the upstart party’s rise among the young. Its events include the popular ‘Pints for Spain’ evenings at bars, nightclubs and cafes, where no one over 25 is allowed through the door.

Under Manuel Mariscal, the 27-year-old Vox spokesman and a newly elected lawmaker, the main Instagram channel has more than 300,000 followers, more than half of them younger than 34. A lot of its outreach happens on WhatsApp, where Vox’s Madrid youth operation has nearly 1,750 active members.

“A young kid who is highly motivated is capable of convincing many others. He talks to friends, he debates constantly with others, with family, that enthusiasm is contagious,” said Luis Felipe Ulecia, the 24-year-old vice secretary for youth. A bracelet with the Spanish flag around his left wrist, he spoke to AP at a working-class bar in northern Madrid about the party’s effort to recruit among the young.

Although the party has a tiny footprint in Spain — elections in April made it the No. 5 political party in the parliament’s lower house — it’s already influencing the political debate on migration or the country’s territorial unity. Still, Vox’s vote total was far lower than its social media following would indicate.

This shows a possible ceiling for the ability of far-right groups to translate likes to votes, according to Manuel Mostaza Barrios, an analyst at the Madrid-based Atrevia consulting group.

As he put it: “The candidates most followed on social media aren’t necessarily those that get the most votes.” 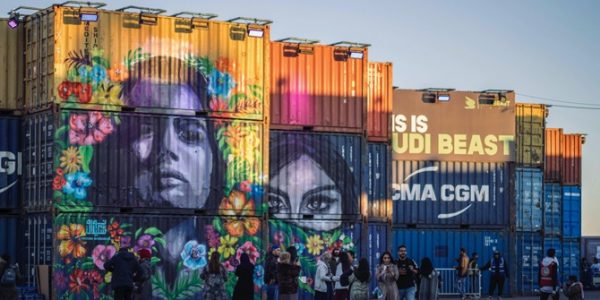