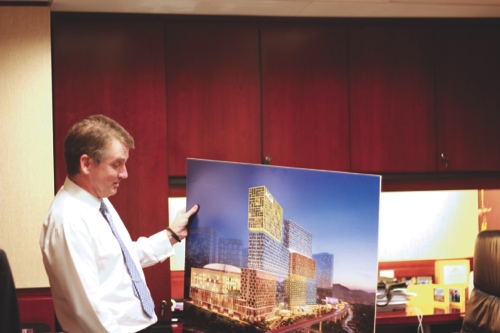 MGM China Holdings Ltd., a venture between Pansy Ho and MGM Resorts International, has just obtained the license approval for the full Cotai building plan. The gaming operator can now “build right up to the hotel tower,” MGM’s senior vice president of design, development and construction Mel Hansen revealed to the Times in an exclusive interview at his MGM Macau office.
Mr Hansen’s statement comes in response to certain doubts that were cast about MGM’s ability to build its Cotai property on time.  During the MGM Resorts International second quarter earnings conference call, the company’s chairman James Murren admitted that getting certain permissions could delay the opening of MGM Cotai.
Mel Hansen, the executive responsible for overseeing the Cotai project, explained the licensing process in detail. The company has already submitted and had approved a General Building Plan (GBP) license and after that, they got a substructure and up to ground floor approval in August last year and have been working on that license up until now.
“We put the full building plan approval in last year and received the required approval Friday last week [August 1, since the interview took place on Friday, August 8] and we got the original license documents for the superstructure on Monday, August 4. This took two or three months longer than what we initially thought, so he [James Murren] refers to that [because] we still have two more submissions. One of these will probably be submitted by January or February of next year and includes all the details about the restaurants and everything in it. If it takes two or three months longer than that he said that it could delay us… I think it will open in the middle of 2016,” Hansen argued.
He further revealed that the license that has just been approved “is the most complicated” of all the approvals, having required 18 months of work before being submitted to the DSSOPT (Land, Public Works and Transport Bureau), where it then took another 9 months to be approved. The above mentioned license detailing restaurants and other aspects, to be submitted in early 2015, will require more paperwork than the one now approved but, according to Mr Hansen, is technically less complex. 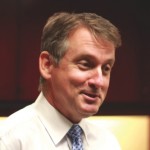 “The Cotai resort will be ‘a boutique property, looking at the high end’,’’ Mel Hansen says

Another interesting comment made by U.S.-based parent company chairman James Murren is that the amount of projects underway in Macau makes it impossible for gaming operators to predict an exact opening date for the Cotai projects. “There’s such a backlog because there are so many towers, so many cranes and so many projects under way in Macau right now that I don’t think anyone can, with any kind of precision, tell you exactly when they’re going to open,” he said.
Mel Hansen agrees: “Yes, because nobody knows how long these things will take. I think everybody in Macau is in the same situation, right now DSSOPT are the busiest they’ve ever been. This submission of ours came to two truckloads of documents, it’s a lot of work to go through, and the one [license] next year is even bigger than this one was. It takes a lot of time for people to review that with another five large resorts all going up at the same time and in a similar phase of the submission plan.”
Asked if he thinks that the licensing phase is too complicated and slow in the MSAR, Mel Hansen says that given the amount of licenses that must be passed by DSSOPT regarding all the construction projects in Cotai, he is not surprised it took them 9 months to approve the MGM Cotai full building plan. “I don’t think it’s long, if you look at any other large projects it’s a complex thing to view and review. I don’t think there has ever been a place anywhere in the world that has five or six big resorts all submitting the same thing to a relatively small department in comparison to the world’s biggest cities. Macau is not a big place and DSSOPT has got to take in five mega-resorts. It is a massive task. And it is not just the casino projects, there are other projects [that DSSOPT oversees].”
Nevertheless Mel Hansen admits that the Cotai development could be more phased to avoid issues like labor shortage and licensing delays, acknowledging that “having opened a few months apart would make it easier for everybody and having them [the resorts] open at the same time wouldn’t be the best way to do it.” He adds, however, that the equation is affected by how fast each gaming operator builds and what type of building is it, since certain buildings take more time to develop than others.
MGM had stated during the results announcement for the first six months of 2014 that its Cotai construction “is moving along at full steam.” Work in the three floors of basement and the ground floor is well advanced, and now it’s time to begin with the hotel towers’ construction. After those works start, Mr Hansen estimates that “you will see a new floor going up every five days” in the hotel tower. “The podium will still come slower, because it’s such a big area, but the hotel tower is a small portion, so it will be a lot more visible how much it is moving forward in the next few months.”
With so much demand for construction workers in Macau, the question arises: How much are labor shortages affecting the Cotai project’s development? “We currently have a labor quote of 1,200 people on site and with the superstructure license we are probably going to add another 1,700 people,” MGM’s senior vice president of design, development and construction replied. “I think that everybody finds it a problem [labor shortages in Macau], but I think that having China State as a contractor [helps], they are fairly well connected in mainland China, so it’s a huge plus for us.”
It is expected that the 2 million square foot MGM Cotai property will attract more than 35,000 visitors per day (MGM Macau receives 25,000 daily), featuring approximately 1,500 hotel rooms (in phase one) with “a lot of variety, bringing the style of the Las Vegas product here.” The casino area will be big enough to contain 500 tables. Similar to the Macau property, there will be a separate VIP lobby.
The new resort design involves three architect firms for the outside design and around twenty interior design firms. It is being conceived as a “boutique property, looking at the high end,” Mel Hansen describes, highlighting the “large entertainment zone with restaurants and retail,” similar to what MGM has in its Macau property, but “a lot bigger and with more entertaining aspects to it.” It will have a thematic show, “something people will go to the property to see, like the fish tank and the butterflies [in MGM’s Grande Praça], but three times the size.” The property’s sole theatre is going to have around 2,000 seats (1,500 to 2,000 depending on the show configuration). Commenting on the possibility of hosting a resident show in that theater, Mr Hansen said that MGM “wants to have something that changes out every two months, as opposed to the ‘House of Dancing Water’ or the ‘Zaia’ [concept] (…) it is a multi-purpose theater.”
The key word on the MGM Cotai concept seems to be adaptation, like the gaming operator’s CEO Grant Bowie told the Times in a recent interview. The project is designed to be adaptable.
“Creating the space, the structure, the engineering and not over focusing on what the creative process is, because that will come over time. The notion about fashion is recognizing that people change their clothes all the time. We need to build a building that has the ability to change itself, morph itself and evolve as things evolve,” he stated.

Born in South Africa, Mel Hansen has worked on the development of fourteen casinos during his career. His favorites include Monte Casino in Johannesburg, New York New York in Las Vegas and, of course, MGM Macau, where the interview took place. However, he says that MGM Cotai is “going to beat them all.” The senior executive affirms this with the proviso that MGM’s peninsula resort won’t risk becoming outdated by the Cotai resort: “We started a big refurbishment plan on this property but by the time Cotai opens we will have to refurbish most of the restaurants and add a restaurant or two. (…) By that time it [MGM Macau] should be totally refreshed.” In terms of hotel rooms, since MGM is “under-roomed,” Mel Hansen anticipates that the refurbishment process will only start once Cotai is open.  The annual spending on the Macau property upgrading costs will currently be “USD50 to 75 million,” he said. It is estimated that in 2015 it will go up to 100 million a year.