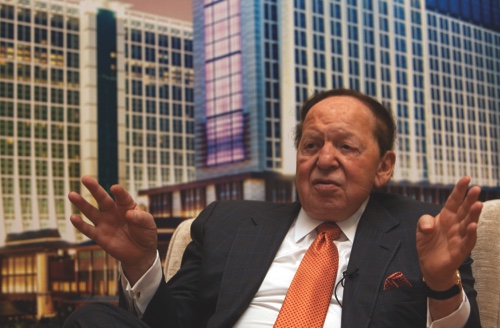 By the time The Parisian Macao opens in 2016, Las Vegas Sands Corp. will have invested more than USD13bn in Macau since Sands China Ltd became a concessionaire 13 years ago. Given that the company’s Chairman and CEO, Sheldon Adelson, owns more than half of LVS’s issued stock, it would be fair to say that he has taken more out of his pocket and put it into the ground here than any of the other concessionaires have ‘as companies.’
So when Adelson says that he knows something about investing, he ought to be taken at his word.
“It all depends on how much risk you are prepared to take,” Adelson says, sipping from an iced tea during our interview at Sands Cotai Central on a chilly Wednesday afternoon this week. “Some people don’t like risk. I do. I took the risk back when Cotai was nothing.”
It is not so much the size of the investment that is important, however. It is what Adelson invested into, which at the time, was a much larger risk proposition than the other concessionaires were prepared to contemplate.
“We originated non-gaming development,” he says. “We built a meetings, incentives, conventions and exhibitions [MICE] industry here. We built a 15,000-seat arena when no one else would. We put Macau on the map as a shopping destination.”
This all began at a time when not even Galaxy Entertainment Group, the other concessionaire initially granted land in Cotai, was ready to start building, and Melco-Crown’s plans for City of Dreams came later. “One of my competitors once said to me, ‘If you are successful, I will follow.’ Well, they lost six years of development time from that decision,” Adelson says.
Now, he believes, everyone else needs to do more. “Less than 3% of our floor space is devoted to gaming,” Adelson says. “Going forward, no one should be allowed to have more than 5% of their floor space for gaming. Non-gaming is the future of Macau.”
It is obviously not lost on the canny 82-year-old Adelson that the local and central governments are of a similar view. China’s President, Xi Jinping, urged Macau to do more to diversify the economy during his speech on December 20 last year for the anniversary of Macau’s return to Chinese sovereignty. Macau’s new Secretary for Finance and the Economy, Lionel Leong, has since then announced a review of the concessions based on their contribution to the diversification of the economy. All of this must be music to the ears of someone who has already invested so heavily in non-gaming facilities and services.
“When I came out to Cotai, I thought I was being exiled,” Adelson says. “But then I had a vision to build the equivalent of the Las Vegas Strip. I did things that everyone else has followed.”
The investments that followed were listed in detail on the company’s earnings call with analysts last week (see box).
He hasn’t done all of those investments just for the sake of a corporate social responsibility statement, clearly. Adelson believes investment into all the components of an integrated resort makes good business sense, too.
His confidence is hardly surprising. Having just released impressive fourth-quarter and annual results, with Ebitda up more than 11% in 2014 – despite the slowdown in gaming revenues in the second half – one might expect Adelson to be gloating about the contribution of non-gaming revenues to the bottom line.
He doesn’t gloat. Instead, he prefers to highlight what to him seems obvious, that he is positioned in the middle of the world’s biggest industry – tourism – on the southern tip of the world’s biggest population.
“There is nothing more predictable, and cyclical, than the tourism business,” Adelson says. “Development happens, then you get competition, then things start to change. But it always comes back.
“That is what is happening now. The government has intervened to cool things down in the VIP segment, but eventually that intervention will run its course, achieve its effect, and things will start to recover. It’s cyclical.
“I can’t see anything wrong with the outlook for Macau over the remainder of the concession period, despite what is going on now, and we are very well-placed to capitalize on that with our diverse spread of offerings.
“We have eight years to go. We are not going to let up on anything we are doing. I don’t see any reason to change course. We are going to cooperate with the government and do what they want, and I think we do a lot more than what our competitors do.”
Adelson seems particularly excited about the outlook for the MICE business in Macau as infrastructure developments come online that will make it easier for international travellers to access Macau.
“There are three places where I have come in and remade with MICE,” Adelson says. “The first was Las Vegas, the second was Macau, and the third was Singapore. The backbone of my strategy has always been the MICE business. Why? Because there isn’t a city in the world that doesn’t want the MICE business. It drives incremental economic development for the community. And there is nobody in this field with greater credentials than our company.” 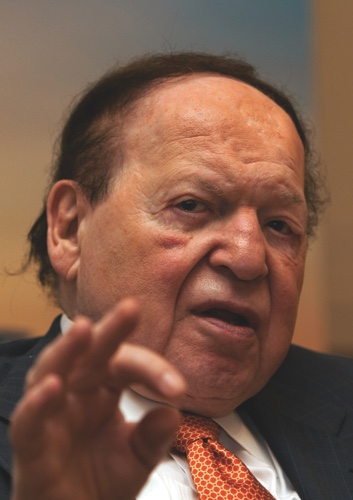 To be clear, however, with all these achievements, being vindicated doesn’t matter, Adelson insists. It’s not about being right; it’s about doing what is right. It’s about taking care of employees, customers, and the community. And it’s about doing business in a moral way – which includes focusing on strengthening regulatory compliance.
“I am a social liberal,” Adelson says, eliciting a chuckle from this interviewer, who alludes to his well-documented confrontation with labor unions in Las Vegas. “Do you know why those unions cannot get my staff to sign up with them in Las Vegas? Because we treat them so well,” he explains. “The local union boss came out and admitted it recently.”
Staff care and benefits are clearly issues close to Adelson’s heart. He walked into this interview after receiving a rousing ovation in the room next door from several hundreds of the company’s 28,000-strong workforce in Macau, where he announced that their annual bonus would be paid, despite the current slowdown in gaming revenues.
Again, it’s not just about the money, Adelson says, pointing to the fact that more than 26,000 people have passed through the Adelson Center for Education, receiving career-enhancing skills at the company’s expense. So it is more than the facilities he has built that have helped to diversify Macau’s economy. It is also the value he has added to the skill sets of the local population.
Adelson believes the same approach he takes toward staff is the way to deal with suppliers in the wider community. It shouldn’t be the middlemen who get all the economic benefits, he says, but “the farmers”. That is one reason why the company recently held a large-scale meeting with local small and medium enterprises to discuss ways to improve communication in managing its vast procurement process.
“I believe people should not be abused or exploited unreasonably,” he says.
Similarly, this internal focus has been extended to the company’s efforts to strengthen its legal and regulatory compliance systems. For Adelson, it is an important moral issue.
“What is the point of doing business the wrong way?” he asks rhetorically. “You can make just as much, if not more, doing things the right way.”
Whereas some people tend to just “focus on the money,” Adelson says he has a “very high moral standard”.
“I was brought up with nothing by my poor parents,” he says. “Except values. And those included: Never lie, always keep your commitments, and follow the law.”
Regulatory compliance is straightforward for Adelson. “The Department of Justice and Securities and Exchange Commission are very worried about terrorism and money-
laundering,” he acknowledges. “In the casino business, in the past we didn’t pay too much attention to where the money came from. But now the government agencies are more focused on it. And so I decided that if they are focused on it, we had better be, too.”
Adelson is adamant that he is not forgoing a financial opportunity by following such a straight moral line with staff, community, and compliance. “We just reported annual Ebitda of more than $5.5 billion. Last time I checked, that was an awful lot of money,” he says with a wry smile.
That pile of money could grow in other ways, of course, such as by selling assets in Macau. But Adelson is unfazed. “We are growing so fast, why would I sell anything?” he says. “Our retail business grew 23 per cent last year, so why would I still want to do a REIT on the malls?”
Looking much further out, beyond the concession expiry dates, is not something that interests this visionary much. When asked for a view on where Macau is headed over the next 25 years, Adelson notes simply that there is little land left to develop, so unless reclamation takes place on a large scale or Hengqin island is somehow merged with Macau, it is obviously hard to see the integrated resort industry sustaining the kind of growth rates it saw for the first 20 years of its existence.
Which brings up the delicate topic of whether he himself will be around to see all of the change that will likely come after the concessions expire in 2022.
Adelson doesn’t bat an eyelid. “I’m living like I have no restrictions,” he says. “I have no expectations.” Anthony Lawrance, Exclusive to MDT/Macau Inc

Hotel rooms: Upon completion of The Parisian, Sands China’s room supply will increase to nearly 13,000 rooms, representing approximately 45% of the total sleeping room inventory built in Macau.
Shopping: Over 1.4 million square feet of retail mall offerings on the Cotai Strip, which represents more than 70% of the total retail mall developments in Macau, and which will continue to expand as the rest of Sands Cotai Central (SCC) and Parisian comes online.
MICE: Over 1.5 million square feet of meetings, incentive, convention, and exhibition space; which is almost five times larger than the combined total MICE space of the other Macau operators. This will increase further to nearly 2 million square feet as The Parisian and incremental capacity at SCC is completed. That will continue to represent approximately 75% of the MICE capacity that will exist by the end of the current concession period.
Entertainment: A 15,000-seat arena that this year will host more than 54 shows from around the world – shows that are televised to billions of people. These shows have included The Voice of China; music superstars such as the Rolling Stones, Rihanna, Alicia Keys and Beyonce; National Basketball Association teams from the US; celebrity events such as the Huading Awards, Asia Pacific Film Festival and the China Music Awards; and, coming up on March 7, China’s first professional boxer, Zou Shiming, fighting for a world title.