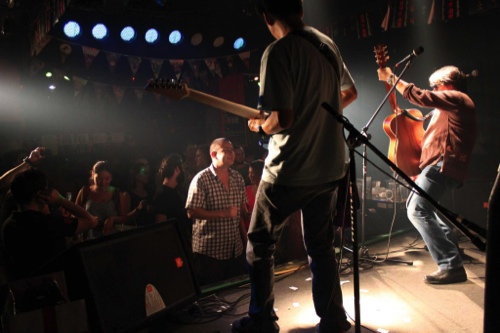 As a means of bringing expats and locals together to enjoy music, as well as raising funds for local charities, a group of expats residing in Zhuhai is organizing a charity music festival for the 4th consecutive year.
The event – the Come Together 2014 Charity Music Festival – is being organized by the Come Together Community. The festival will be held on September 13th from 2p.m. until 11p.m. at the Beishan Theatre in Zhuhai.
According to the organizer, the idea behind the festival is to bring expats and locals together to enjoy a day of fun games and music with the express aim of raising as much money as possible for local charities. Last year, the event raised over RMB 80,000 for local underprivileged children.
Throughout the afternoon, food, games and workshops will be provided. The event will feature live music acts including the Zhuhai Autism Society children’s choir, solo acts and traditional Chinese instrumental performances. The party will begin at 6p.m.  Live music performances will include selections by bands from, and outside of, China, Hong Kong, Macau and Zhuhai.
Donations will be given to two local charity organizations, namely the Charity Promotion Association of Zhuhai (CPAZ) and the Zhuhai Autism Society (ZAS).
Mark Clayton, one of the organizers in the CT Community, said: “The organizers of ‘Come Together’ have lived in Zhuhai and China, collectively, for over 35 years; we love it here and consider it our home. For this reason, we feel that we want to give back to the community and help to make it a better place for all residents.”
Clayton revealed that there would be new elements this year. “Firstly the event is starting at 2p.m. and we have a whole range of daytime programs planned for children and families, including child bands, the Autism children’s choir, games and activities and more. The second change is that we’re expecting the event to be a lot larger this year, we’re expecting nearly 10 times the number of people as [the number in attendance in] 2013.”
According to the organizer, people can join in the charity event via various methods: by making a monetary donation or a gift donation for the raffle, or by working as volunteers.
He stressed that the fundraiser is “for 100 percent charitable causes, with 100 percent transparency.” “Through CPAZ, we’ll be donating half of the takings to underprivileged school children and orphans, and through ZAS we’ll be donating the other half to Autistic children in Zhuhai,” he told the Times yesterday.
The annual charity music festival was first held in Zhuhai in 2011.  GY