EXTREMISM | Kurds in Europe take up arms against IS group 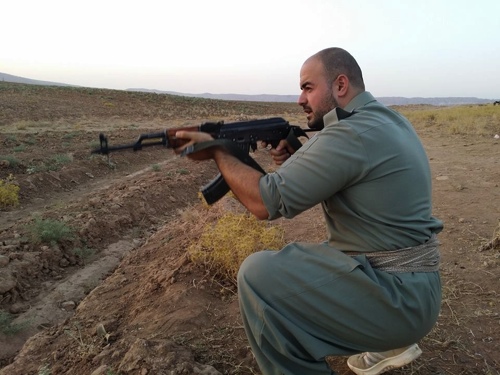 Shaho Pirani says he’s just a phone call away from leaving his quiet life in Denmark and joining Kurdish forces battling against Islamic State militants in Iraq.
The 30-year-old Kurd, who fled from Iran with his older brother in 1991, says he feels a moral duty to help the peshmerga, the armed forces of the Kurdish regional government, to fight the “psychopaths” of the Islamic State group.
“I feel so helpless here,” Pirani told The Associated Press in an interview in his home in Koege, a tranquil Copenhagen suburb with neatly trimmed lawns and hedges. “I am ready to die for the Kurdish cause.”
While more than 2,000 Europeans are believed to have joined the Islamic State organization and other jihadist groups as foreign fighters, a smaller number has left Europe in recent months to fight against the Islamic militants, primarily with peshmerga forces in Iraq’s Kurdish north, Kurdish diaspora leaders and security officials say.
Unlike with Islamic State fighters, however, European governments don’t show any intention to stop the Kurdish volunteers from getting involved in the conflict. Though they, too, stand to get weapons training and combat experience and could return traumatized by the horrors of war, the Kurdish fighters are not seen as a threat to the West.
“Our focus as a security service will be more on groups like IS and not people going to defend areas against the IS,” said Trond Hugubakken, spokesman for the Norway’s PST security service.
Traveling to participate in an armed conflict is rarely a crime in itself, so European security officials say they act only if they suspect a fighter has committed war crimes or might engage in terrorist activities after returning.
There are no exact numbers on how many people have left Europe to fight the Islamic State group. But Mehmet Tanriverdi, deputy chairman of the Kurdish community in Germany, said he knew of “dozens” of Kurds who had traveled from Germany and other European countries to join the peshmerga.
Shwan Zulal, an associate fellow at King’s College and the director of London-based Carduchi Consulting, said the stream of Kurdish fighters from Britain was “nowhere near the number of people that have gone and joined ISIS.”
British authorities might be “somewhat worried” about Britons volunteering to join Kurdish forces, Zulal said. But he could not imagine anyone being prosecuted for “fighting the United Kingdom’s enemies.”
Britain, Germany, the U.S. and other countries are sending light weapons and ammunition to the peshmerga. Aided by American airstrikes, the Kurdish forces have recovered some territory seized by Islamic State militants in recent months.
Edmond Messchaert, spokesman for the Dutch Justice Ministry on counterterrorism, said Dutch Kurds are not being blocked from joining the peshmerga and would not be prosecuted on return unless they committed war crimes.
It is not as clear-cut when it comes to foreign fighters joining the PKK, a Kurdish rebel group considered a terrorist organization by the European Union and the United States.
Messchaert said any Dutch Kurd who joined the PKK would be committing a crime, though he stopped short of saying they would be prosecuted.
The Swedish security service SAPO’s view is that people who fight for the PKK “aren’t automatically guilty of a crime,” and would be prosecuted in Sweden only if they violated the laws of war or used banned weapons, SAPO spokesman Fredrik Milder said.
The PKK, which has long fought for autonomy in Turkey, and an affiliated party in Syria, are now a key part of the Kurdish resistance against the Islamic State group.
Turkish officials say they have seen signs that Kurdish militants have left Turkey to join PKK forces fighting Islamic militants. German chancellor Angela Merkel has ruled out sending German weapons to PKK fighters.
Horrified by the Islamic State group’s ruthless tactics, Kurds in Europe are organizing fundraisers and protests in support of minorities being threatened, including Kurdish-speaking Yazidis.
However, the Kurdistan Regional Government is advising diaspora Kurds against joining the peshmerga because the forces need weapons, not manpower, said Shorsh Kadir Rahem, a KRG representative in Sweden.
“We have old Kalashnikov (assault rifles) from the ‘60s and ‘70s while ISIS has much bigger weapons they have taken from Iraq’s armed forces,” he said.
In Denmark, Pirani said he wants do more than provide humanitarian help. He said he attended a small training camp in June organized by the Iranian branch of the Kurdistan Democratic Party in the Kurdish town of Koya in northern Iraq.
There, he said, he joined Kurds from Norway, Switzerland and Britain for a crash-course on politics followed by weapons training. He provided a photograph of himself posing with an assault rifle at the camp.
Pirani, an unemployed anthropologist whose father was a high-ranking peshmerga, said he is now awaiting a call from party officials to join the Kurdish forces. He said even if he doesn’t get called up he will probably go anyway.
“My ex-wife and my mother both say that they want to tie me to a chair to make sure that I don’t leave,” Pirani said. “They cannot understand that once in a while you have to sacrifice everything to fight for basic rights.” Jan M. Olsen and Karl Ritter, Koege, AP