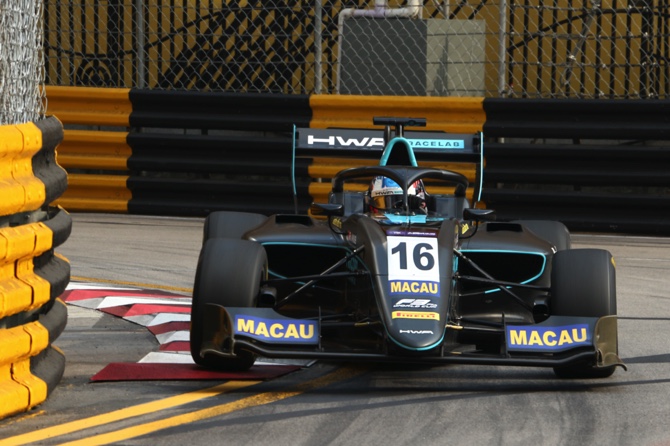 The British driver from HWA Racelab beat German David Beckmann from Trident Motorsport to the pole in the first of two qualifying sessions with a time of 2:06.793.

In the process, Hughes also broke the fastest lap record around the Guia circuit in an F3 car.

Closing the Top 5 were Marcus Armstrong and Logan Sargeant, respectively, clocking times very close to the first few ones. Between the first and the fifth positions was a mere 0.619 of a second. It was only until the eighth-best time where there was a difference greater than one second, proving that the front runners are all very close and that the slightest mistake can bring about immediate consequences on the timesheets.

With the obvious evolution in speed and engine performance brought by the new specifications of formula cars, the times dropped on average by 3.5 seconds per lap, but it is expected that more records will be set over the weekend as the drivers gain more confidence and the cars’ setup is perfected by the teams.

Such adjustments were also the cause of several interruptions to the session after a sequence of red flags due to run-offs at Lisboa bend, with the race directors deciding not to restart the session after the last one.

Two very experienced racers, two-time champion Daniel Ticktum and Callum Ilott, waited for a slight split of a second coming from the flaw of another contender.

These three are considered the “surprise group” from which significant improvement is expected as yesterday there was no clear indication on how fast they could perform on a clear track. The trio were faced with a sequence of yellow flags that undermined their launching laps when they were aiming to bring their times down.

More action will happen today with two sessions of the FIA F3 World Cup – the free practice race 2 where racers are expected to go out on track around 11:30 a.m., followed by the qualifying race 2 at 3:10 p.m.

The last race will finally decide the line-up of the grid for the qualification race on Saturday at 9 a.m.