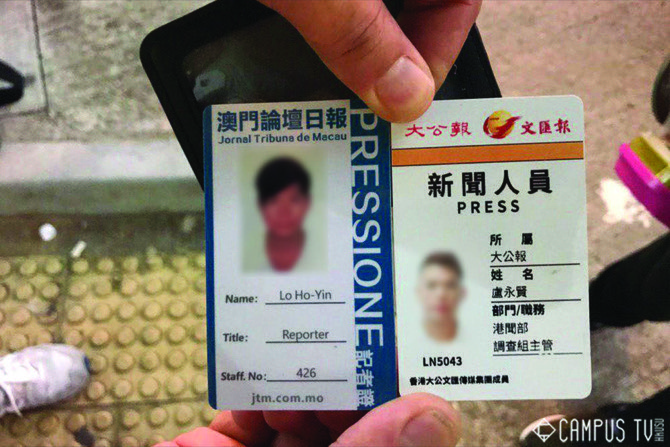 An online video channel associated with the University of Hong Kong Students’ Union (HKUSU) posted an image of two media passes on its social media page yesterday, one with the name of local Portuguese newspaper “Jornal Tribuna de Macau” (JTM) printed on it.

The other pass is believed to be from Hong Kong’s pro-establishment media outlets Ta Kung Pao and Wen Wei Po. Both logos are seen on the pass. The information printed on the pass suggests it belongs to Lo Wing Yin, a journalist with Ta Kung Pao.

The video channel reported that Lo has been using the fake media pass to cover up the pass of Ta Kung Pao, where he allegedly works.

In response, the Portuguese media outlet issued a declaration yesterday, stressing that the outlet “has never issued such a pass, and has no employment relationship with the person”.

Ta Kung Pao also issued a statement dated August 4 asserting that some of its journalists had been attacked at Causeway Bay, Hong Kong. The statement condemned the act of violence. However, no connection could be made between all these happenings.

The fake JTM pass was mainly printed in English, with only the name of the outlet and the word “pressione” in Portuguese. Although the Portuguese word directly translates to “press” in English, it actually means to “apply pressure”.

A report by Hong Kong 01 online media from early 2017 shows that Lo worked with Ta Kung Pao. In the course of his work, Lo was involved in a fight with Hong Kong activist Edward Leung Tin Kei at MTR Tai Koo Station.

Both Lo and Leung were each given a HKD1,000 bond by the Court for a year. AL