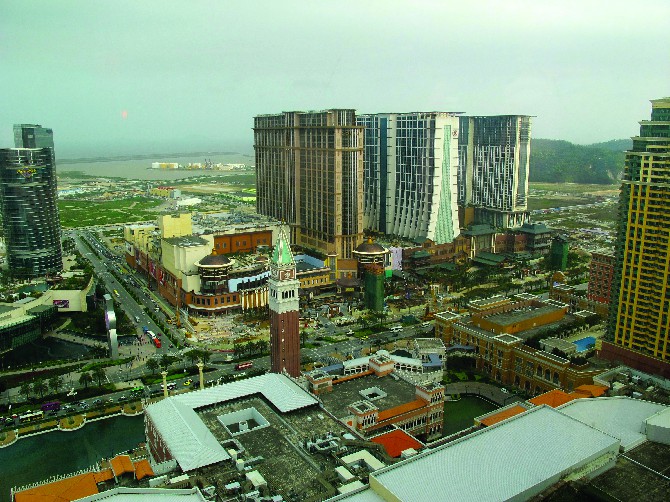 New measures designed to reduce the frequency of border crossings into Macau by non-resident workers living on the mainland is having an impact on local construction projects.
Starting this month, the Macau SAR government has required all non-resident workers from the mainland to face a 14-day quarantine when entering the territory. The move, designed to deter crossings, prompted a number of large employers in Macau to offer temporary lodging to their workers.
The construction sector is one of the largest employers of non-resident workers in Macau. With a reduced number now working in the Macau SAR, some analysts have suggested that hotel and casino developments in Cotai could be impacted.
“Obviously entering and leaving [Macau] each day is no longer feasible and should the casinos have to provide local accomodation, the costs would be untenable, given the lack of supply of ready workers housing,” said Ben Lee, managing partner of IGamiX Management & Consulting.
“I think there will be delays all around,” added Lee. “The dependency on Chinese workers is very high.”
That was the case for Melco Resorts & Entertainment, which said it had expected a slowdown for the $1.4-billion phase two development of its Cotai-based Studio City property because of the low number of construction workers arriving from mainland China. Phase two of the expansion is designed to increase Studio City’s hotel room capacity by approximately 60%, and will offer non-gaming attractions, including a cineplex and a water park.
However, Sands China President Wilfred Wong insisted yesterday that the redevelopment of The Londoner Macao was progressing as planned, and there were no indications of delays.
“We are going ahead as planned for the construction of The Londoner,” said Wong. “We have made a lot of preparations including giving foreign workers 14 days quarantine before they start work. Then, when they do the works, we will have a lot of precautions like measuring their temperature every day.”
The redevelopment of The Londoner Macao had been designed in stages so as to cause minimal disruption to visitors and gamblers at the Cotai Central properties. But the lack of tourists this month provides an opportunity to expedite its development.
The local government has made use of the unexpected quiet period to progress on several public works projects, including roadworks at major intersections on the Macau peninsula.
Other properties currently under development in Macau include the Lisboa Palace and the Lisboeta, both of which are understood to be very close to completion, as well as Galaxy’s phase 3.