Fighters back from Iraq, Syria are threat 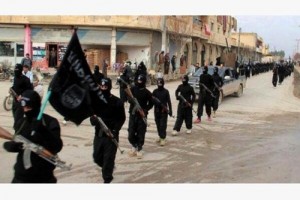 Fighters from the Islamic State

China and its Central Asian neighbors face increased terrorism threats as their own nationals return home after fighting in Iraq and Syria, the head of a regional anti-terrorism organization said yesterday.
The Shanghai Cooperation Organization’s Regional Anti-Terrorism Agency is assisting authorities in those countries in monitoring militants who have traveled to terrorist hotspots, the body’s director, Zhang Xinfeng, was quoted as saying by China’s official Xinhua News Agency.
They are also closely watching online discussions where radicals “tend to incite religious extremism, recruit followers and plot terror attacks,” Zhang said.
All member states of the organization known as the SCO have citizens who have joined radical groups in Iraq and Syria, Zhang said, reflecting similar concerns in Europe and the United States about the impact of radicalized fighters on security at home.
“These people have started returning to their homeland, which constitutes a major threat to regional security,” Zhang said. No other details were given, although Chinese officials say they believe several dozen Chinese citizens have joined radical groups in Iraq and Syria.
Militants from China’s Uighur Muslim ethnic minority have been waging an increasingly violent uprising against Chinese rule in the northwestern homeland and some are believed to have joined with Islamic militants in Pakistan’s lawless northwest. China has about 10 million Uighurs and about 10 million more non-Uighur Muslims, some of whom identify with global jihadist causes.
Citizens of the other five SCO member states — Russia, Kazakhstan, Tajikistan, Kyrgyzstan and Uzbekistan — are also believed to have joined up with other radicals in Pakistan, Afghanistan, the Middle East and elsewhere.
Zhang said his agency plans to take up further anti-terrorism measures at this week’s SCO summit in Tajikistan’s capital, Dushanbe.
“Our goal is to eradicate threats to the region’s stability before they cross the borders,” Zhang said. AP