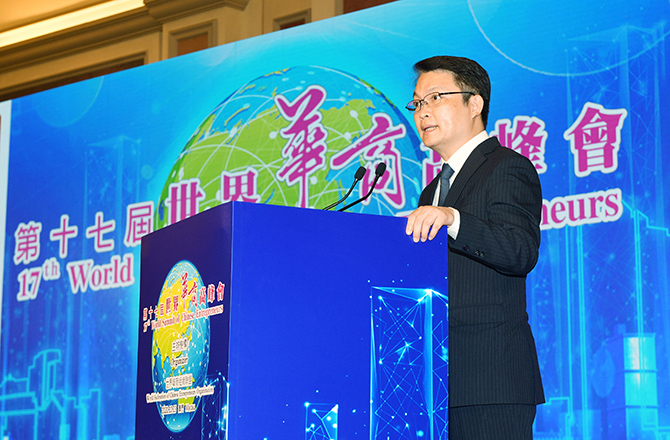 Secretary for Economy and Finance Lei Wai Nong has encouraged Chinese entrepreneurs from around the world to collaborate with those in Macau, to connect them with new opportunities brought by the upcoming development phase occurring in China.
“We are willing to work with overseas Chinese entrepreneurs and overseas Chinese to make due contributions to the great rejuvenation of the Chinese nation,” the secretary pledged.
His comment was made last week during his speech at the World Summit of Chinese Entrepreneurs, which was being held alongside the Macao International Trade and Investment Fair and two other trade shows.
Representing the Macau government, Lei highlighted that the country will have another stage of rejuvenation and innovation. He said that businesses in Macau could help entrepreneurs leverage both the domestic and international markets.
“[It will] foster multilayered connections with the ‘Belt and Road Initiative’ and the Guangdong-Hong Kong-Macau Greater Bay Area (GBA),” the official said. “[It will] better serve the needs of the country and [play to] Macau’s strengths.”
The secretary also made reference to the “profound changes” the world was facing, with Covid-19 as one.
“Resuscitating the economy under counter-pandemic [measures] has become the primary task of governments and [people from] all walks of life around the world,” the secretary pointed out.
“In this process, the supporting role of innovation and technology in promoting economic recovery will become more important,” Lei added.
He then said that innovative technology provided a huge impetus for the construction of “smart cities.” This will have a profound impact on improving the quality of life of residents and allow all sectors of society to enjoy the effects of the technological transformation of civilization.
On behalf of the Special Administrative Region government, Lei said that they would support Chinese entrepreneurs becoming participants and beneficiaries of Macau’s integration into the national economy.
As he concluded his speech, the secretary stressed that 2020 is the final year of China’s plan to build a moderately prosperous society in all respects and the 13th Five-Year Plan. “It is the key to achieving the first centenary goal, laying a solid foundation for the 14th Five-Year Plan and the second centenary goal,” the secretary said.
“With the strong support of the central government, Macau has achieved results in epidemic prevention and anti-epidemic [measures], and I have a deeper understanding that the motherland will always be the strongest backer for us and overseas Chinese,” Lei added.
The summit has been held in Macau since 2004. The secretary used this as proof of Macau’s power to consolidate Chinese entrepreneurs around the world and make progress in national economic development and civilization.
The theme of the summit was “Technology and Life-Sustainable Development of Smart Cities.” AL