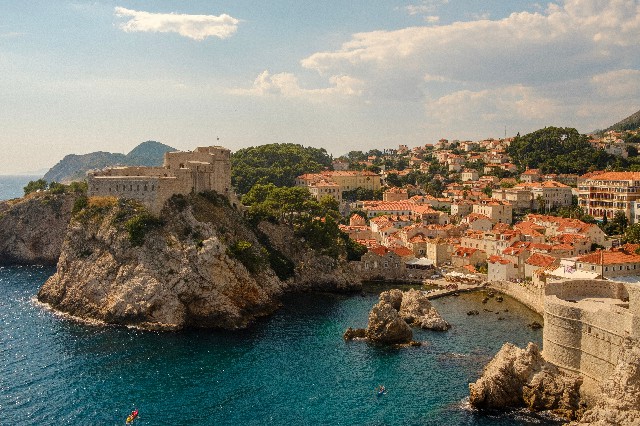 On a recent late-summer’s day, 24-meter-high pile drivers shook a rocky beach on the Croatian island of Krk with bone-jarring thumps. Where blue waters meet the tan shoreline, workers were laying the foundation for independence from Russian gas.
The construction of a floating seaside liquified natural gas storage facility, already a decade in the making, is still more than a year away from being operational and is far from finished. But planners are already counting on it to give the newest European Union member flexibility in meeting future domestic energy needs and supply storage for other gas users, even if it doesn’t turn a profit before 2025.
The terminal “will ensure the security of supplies, increase competitiveness in the market, and give us a better position in negotiating future gas deals,” said Barbara Doric, the managing director of LNG Hrvatska d.o.o., the state company developing the terminal.
The project is the first of its kind for Croatia, which has the EU’s fifth-longest coastline, and is the result of the U.S. lobbying to reduce the country’s need for Russian gas. Once online, the terminal will have an annual capacity of 2.6 billion cubic meters of gas, equivalent to the country’s annual usage.
The construction comes amid a regional push to ease the risk of gas shut offs for geopolitical reasons. Russian supplies of the commodity were cut amid disputes with Ukraine in 2006 and 2009, and authorities have since looked at alternative pipelines and other solutions. The Krk LNG terminal would function like one in Lithuania, whose floating terminal operated by Klaipedos Nafta is fully booked through the end of 2020.
The EU contributed 101 million euros ($111 million) to develop the Krk terminal, with the Croatian government matching the amount and national grid HEP d.d. and state-owned gas pipeline operator Plinacro d.d. adding about 15 million euros each.

Booking capacity
So far, Croatian grid operator HEP and Zagreb-based refiner INA Industrija Nafte d.d., which is controlled by Budapest-based Mol Nyrt., have booked capacity. The government is in talks with Hungary to book about 25% of annual capacity. Without additional investors by the time the plant begins operations, about 40% of its running costs will be covered by a special fee on gas customers for security of supply, estimated at 35 kuna ($5.22) per user a year.
Croatia expects interest in the plant’s capacity will increase because natural gas is expected to be the fastest growing fossil fuel through 2040, and it will increasingly be transported in liquid form, according to the International Energy Agency.
China, India and other developing countries plan higher imports of cleaner energy sources to cut coal and oil pollution. Earlier this month, Russia’s Rosneft PJSC and Novatek PJSC announced plans to build LNG plants to export the fuel from the country’s remote corners.
Krk’s floating terminal will be a 280-meter-long converted ship expected to be delivered by Golar LNG Ltd. by November next year. It will sit near an oil storage tank farm owned by state oil pipeline operator and a defunct petrochemical complex inherited from the socialist era.
In the background, white stone houses of the historic Omisalj city glisten on a hill covered with Mediterranean vegetation, a juxtaposition that illustrates Croatia’s chronic dilemma between encouraging industry and boosting tourism, the country’s biggest earner.

First attempt
Vjeran Pirsic, an activist with local environmental group Eko Kvarner, said construction is being monitored, and the group still has some concerns, including the use of sea water to warm up and re-gasify the liquid fuel.
But Croatia, which imports more than half of its natural gas, can no longer afford to wait, Doric said. The terminal will also allow exports once a gas inter-connector with Hungary is completed by the end of this year, with reversible capacity of 1.5 billion cubic meters per year. Croatia produces about 40 percent of its own needs.
“The production of gas in Croatia is falling, making us even more dependent on imported gas,” she said. “This way we have ensured the security of supply for the future.” Jasmina Kuzmanovic, Bloomberg