Flying Daggers: Six talked about films of the year

Flying Daggers section brings us a collection of six exciting and daring movies produced this year, which won accolades worldwide and are being premiered at the Macau Tower and Cinematheque Passion from December 8 to 12

During the Philippine drug war, rookie police officer Nina Manigan joins a new PDEA (Philippine Drug Enforcement Agency) anti-drug squad. Her previous team was all killed in a drug raid that had been compromised by corrupt cops. As the new elite group is sent into a rushed operation to bust Biggie Chen, a big drug lord, Nina gets the feeling that history is repeating itself as their cover is blown and no backup comes to their aid. As suspicions grow that there might be a traitor in the squad, Nina realizes it is she who has to find out who the rat is.

Erik Matti, director, and co-writer of the script was born in 1970 in the Philippines. He is an acting coach, producer, writer and director who has won numerous awards including the 22nd Metro Manila Film Festival awards for Best Original Story and Best Screenplay for his film “Magic Temple.” He started directing in 1999 and was awarded Movie Cinematographer of the Year and Movie Director of the Year for his film “On the Job” (2013) at the 30th PMPC Star Awards for Movies. Starring as Nina is Anne Curtis, a Filipino-Australian television host, model and actress. Currently, she is hosting the show “It’s Showtime” on the ABS-CBN network. 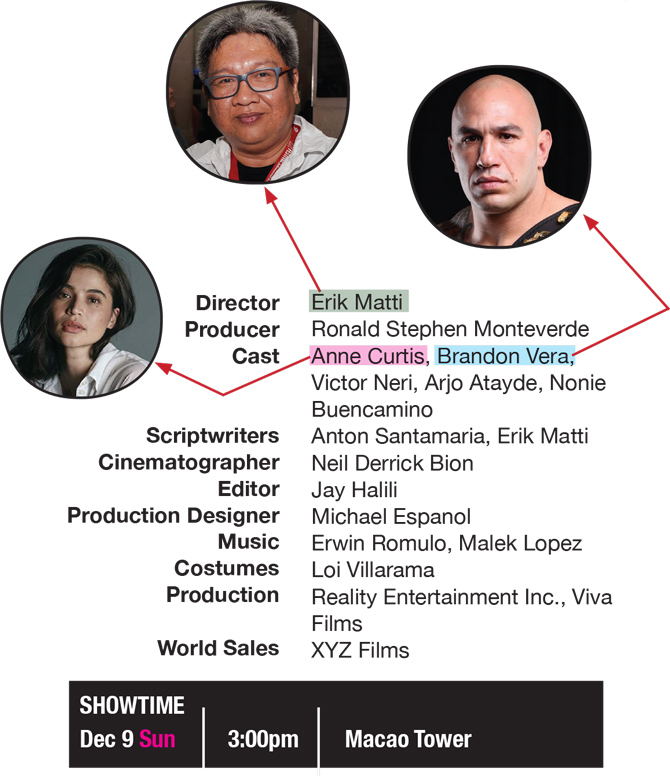 Diamantino tells the story of a great Portuguese football player who, after missing a penalty in the World Cup Final, is disgraced and ends his career. Not playing football anymore, Diamantino is forced to find a new purpose in life, and so he starts a journey with the hopes of finding some sense in life. He encounters neo-fascism, is moved by the refugee crisis, investigates about genetic modification and struggles with the creation of genius. Having premiered at the 74th Cannes Film Festival, Diamantino has won the Grand Prix of the Week of Criticism and Palme Dog.

Gabriel Abrantes was born in the US in 1984 and is currently residing in Lisbon. He studied at The Cooper Union for the Advancement of Science and Art in New York, where he received a BA in cinema and visual Arts in 2006. Abrantes then studied both at L’Ecole National Des Beaux Arts in Paris and Le Fresnoy Studio National des Arts Contemporains. He started by directing short films that have been screened in Venice, Toronto, Berlin, and Locarno. This is his first feature film, and it is being very well received. Acclaimed Portuguese actor, Carloto Cotta, is the star of the film. Cotta was born in Paris in 1984 and is known for his role in the short movie “Arena” (2009), which won the Palme d’Or at the Festival de Cannes. 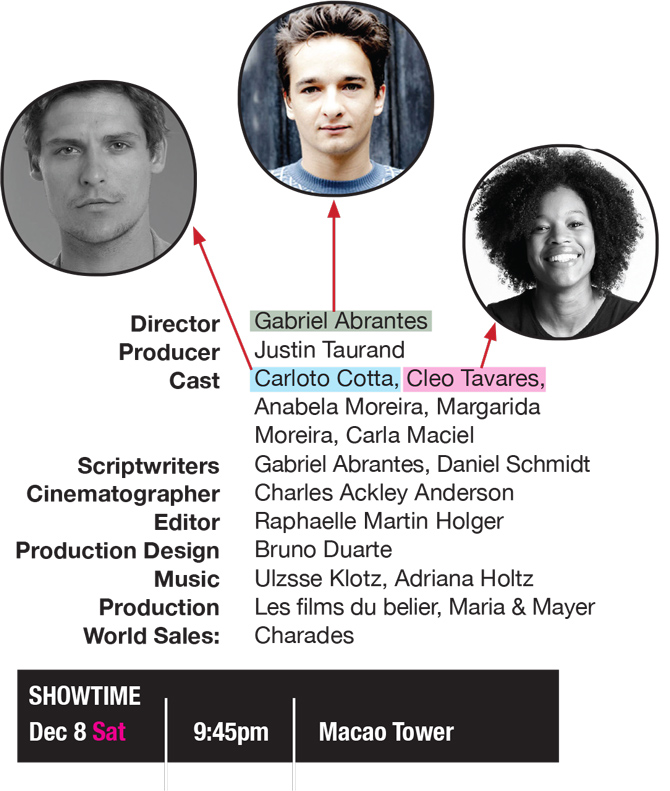 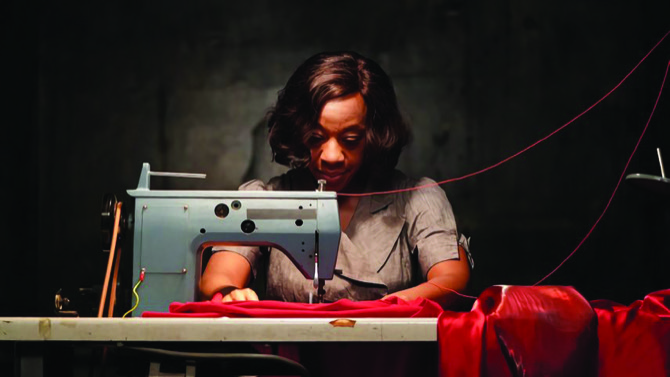 Sheila Woolchapel is a middle-aged bank clerk who enters a local department store and buys a beautiful red dress. She lives a rather dull life: a teenage son who doesn’t speak very much, a job that she doesn’t like. The dress starts to improve her self-esteem, making her feel better and happier. As she is wearing it, she meets a man with whom she begins to fall in love. But the good luck ends here. In Fabric tells a haunting story of how this red dress is cursed and yet indestructible. Whoever possesses it has their life turned upside down and is faced with terrible consequences.

Peter Strickland is a UK-born writer and director who group up in Reading, Berkshire where he was a part of the Progress Theatre. During this time, he directed an adaptation of Franz Kafka “The Metamorphosis.” His first feature film “Katalin Varga” took over four years to create and was selected to be screened in Berlin in 2009 for the official competition segment. His second feature film “Berberian Sound Studio” (2012) received four British Independent Film Awards, including best director. “In Fabric” is his fourth feature film and premiered earlier this year in Toronto. It stars Gwendoline Christie, the British-born actress famous for her role as Brienne of Tarth in the HBO adaptation of “Game of Thrones.” Beside her is Marianne Jean-Baptiste, starring as Sheila, who is a well-known British actress famous for “Without a Trace” (2002), “Secrets & Lies” (1996) and “Spy Game” (2001). 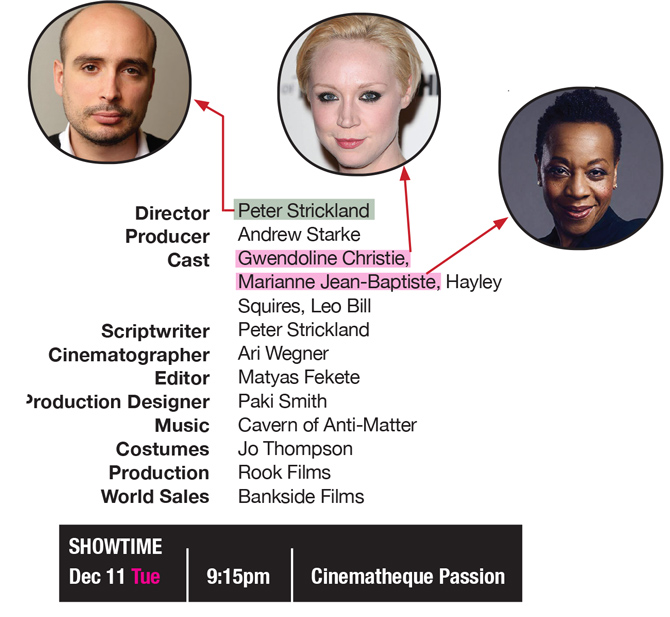 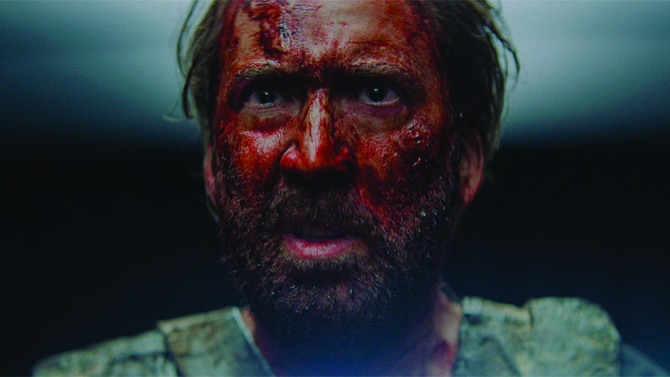 Lumberjack Red Miller and his girlfriend Mandy Bloom are a couple in love. They live a simple life in a secluded forest until Jeremiah Sand and his cult appear and shatter their lives. The sadistic cult leader sees Mandy and falls in love with her. He orders his followers to kidnap her so that he may seduce her, but she is not swayed and laughs in his face. He gets angry and orders that she be killed in front of Red who unleashes his anger on a journey to get revenge.

Panos Cosmatos, born in Rome in 1974, is the son of Greek film director George P. Cosmatos and Swedish artist Birgitta Ljungberg-Cosmatos. After moving to Canada in the ’80s, the director starts to develop a taste for heavy metal, fantasy art, science fiction and horror films. The feature film that brought him into fame, “Beyond the Black Rainbow” (2010) was screened in numerous film festivals, such as Tribeca and Fantasia. Starring as Red is Academy-Award Winner Nicolas Cage. Cage is an American actor, director, and producer who is best known for his Oscar-winning role in “Leaving Las Vegas” (1995), and his roles in “The Rock” (1996) and “National Treasure” (2004). His co-star is Andrea Riseborough, a British actress born in 1981 famous for her roles in “Birdman or (The Unexpected Virtue of Ignorance)” (2014), “Oblivion” (2013) and “W.E.” (2011). 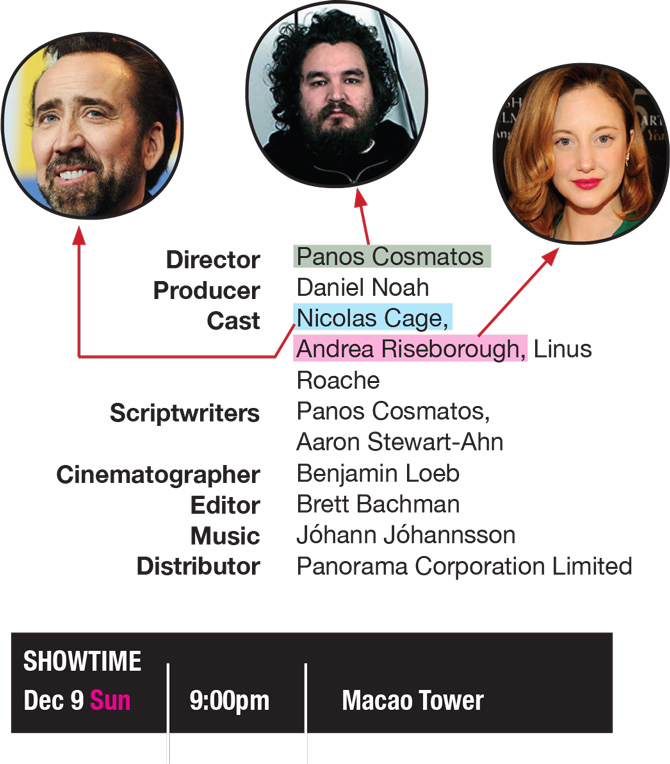 The Witch: Part 1 – The Subversion. 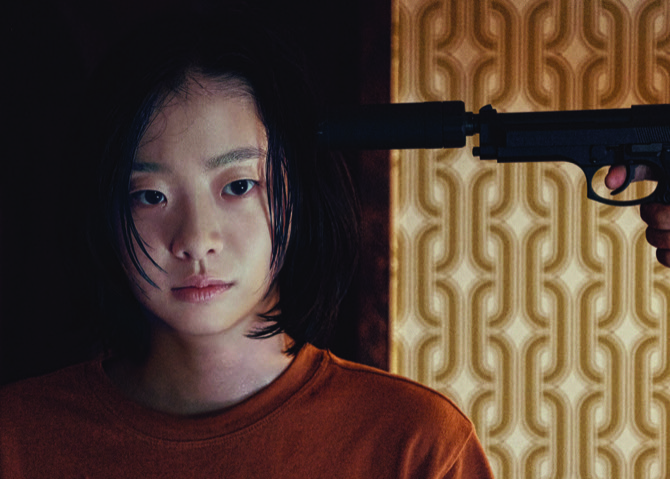 Ja-yoon manages to escape a government-owned facility as a child. As she is traumatized, she loses her memory and has no recollection of her name, her age or her past. She wonders alone and is found by an old couple who decide to take her in. She turns out to be a brilliant student who is invited to enter a televised national talent show. She wants to win as the prize money would greatly help her low-income family. As she appears on television, the people who held her captive find her and she starts being stalked. Her life is suddenly turned upside down as she begins to understand her past and is compelled to run away from danger.

Park Hoon-jung was born in South-Korea. He first started as a screenwriter, having received praise for “I Saw The Devil” (2010) and “The Unjust” (2010).  He started directing in 2010 with the action film “The Showdown” that was followed by the police thriller “New World” (2012). This is the first of a planned trilogy. Choi Woo-shik stares in this film. He is a South Korean actor that has won various awards including the Blue Dragon Film Award for Best New Actor. Cho Min-su is his counterpart. She is a South Korean actress best known for her role in the Kim Ki-duk film “Pietà.” She was awarded the Grand Bell Award for Best Actress and the Baeksang Arts Award for Most Popular Female in Television. 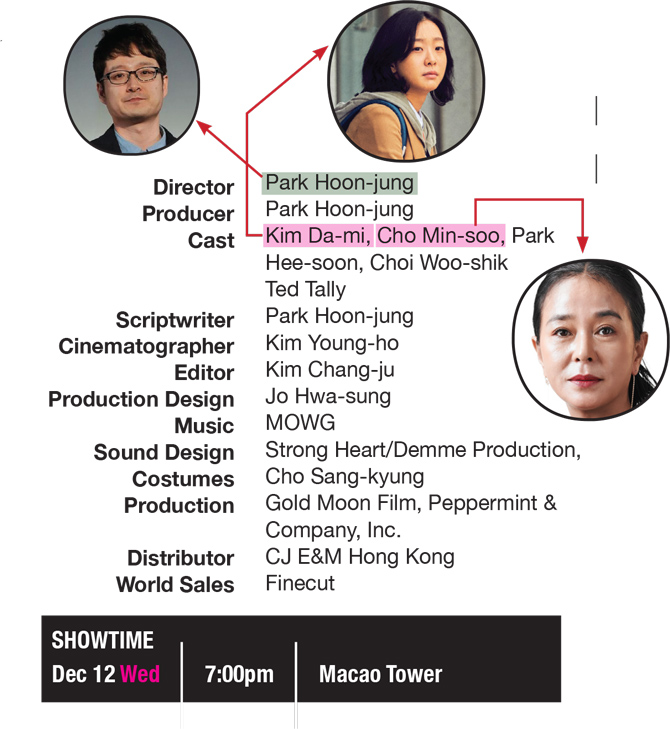 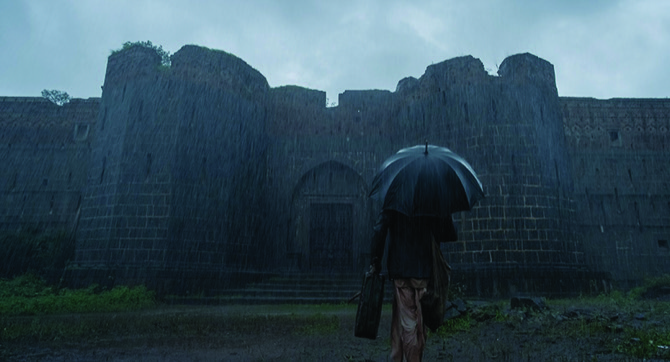 In an Indian village called Tumbbad in the early 20th century, Vinayak, a stubborn bastard son of the village lord, lives obsessed with a mythical ancestral treasure. He is the great-grandson of a witch who is cursed to sleep for several centuries and with whom lies the secret for a great treasure he wants to find. As he confronts her, he is put face to face with an evil god, the guardian of the treasure who will leave him obsessed with gold and riches.

Director Rahi Anil Barve was born in 1979 and first came to fame after the success of his first short film “Manjha,” chosen by director Danny Boyle to be part of the BluRay special of his “Slumdog Millionaire” hit film. It was awarded the top prize at the 2007 Mumbai International Film Festival. Cameron Anderson stars in this feature film. He is an actor, known for “The Bank Job” (2008) and “Persona” (2011). Co-starring is Ronjini Chakraborty, an actress, known for “From Sydney with Love” (2012) and “At the End of It All” (2011). 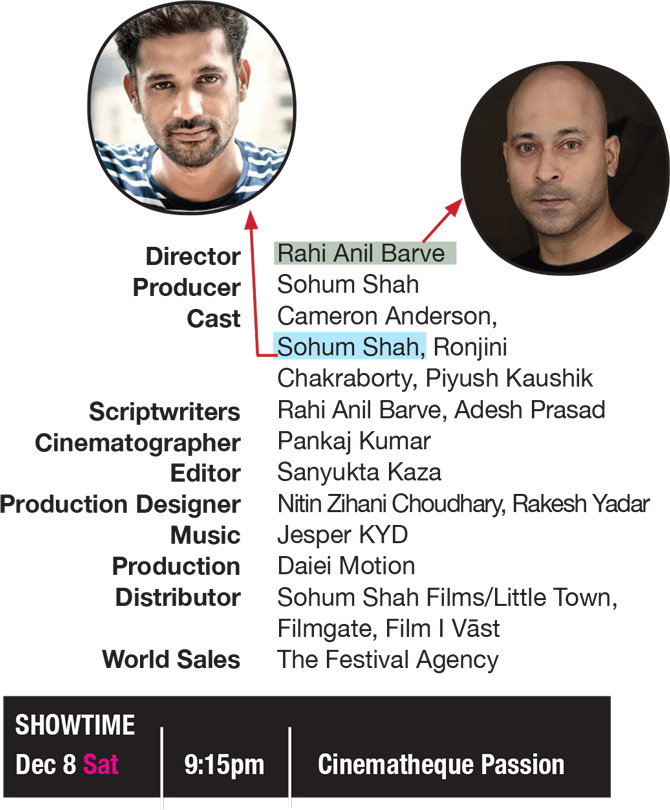