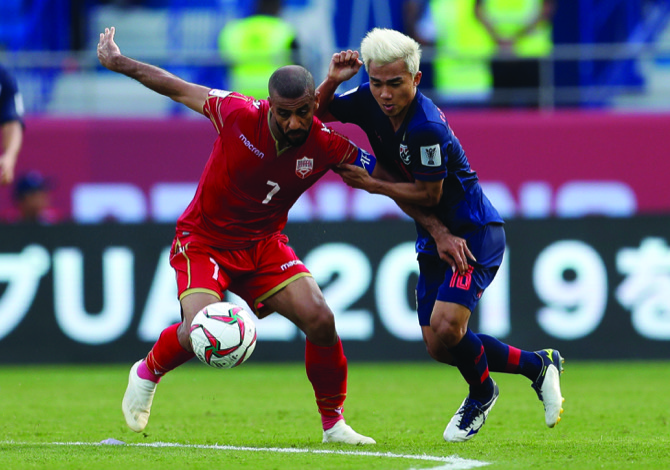 Changing the manager had an immediate benefit for Thailand as it won only its second of 22 matches at the Asian Cup yesterday. Chanathip Songkrasin scored the only goal as Thailand beat Bahrain 1-0.

Sirisak made five changes to the team which lost to India, and Thailand, which conceded four goals in each of its past two matches, managed to keep only its second cleansheet in its last 14 Asian Cup games.

It was helped by some wayward finishing from Bahrain which managed only three shots on target out of 15 attempts.

Thailand grew in confidence as Bahrain failed to translate its dominance into goals, and Chanathip broke the deadlock in the 58th minute after Tristan Do’s cross was deflected into his path by Bahrain defender Ahmed Ali Juma.

Chanathip came close to setting up Thailand’s second when he picked out an unmarked Adisak Kraisorn but his effort hit the post.

The meeting of Thailand and Bahrain on the pitch came a day after FIFA issued a fresh plea for a “humane and speedy resolution” to an extradition case involving a footballer that has been criticized by human rights groups.

Hakeem al-Araibi, a former international for Bahrain, was granted refugee status in Australia last year after fleeing his homeland, where he said he was persecuted and tortured. He was arrested while on holiday in Thailand in November due to an Interpol notice in which Bahrain sought his custody after he was sentenced in absentia in 2014 to 10 years in prison for allegedly vandalizing a police station — a charge he denies.

“This situation should not have arisen, in particular, since Mr Al-Araibi now lives and works and plays as a professional footballer in Australia, where he has been accorded refugee status,” FIFA said in a statement. “FIFA is therefore calling on all the relevant authorities (in Bahrain, Thailand and Australia) to take the necessary steps to ensure that Mr. Hakeem Al-Araibi is allowed to return safely to Australia where he can resume his career as a professional footballer.”

Thailand moved into second spot in Group A, two points above the United Arab Emirates ahead of the host nation’s match against group leader India later. AP