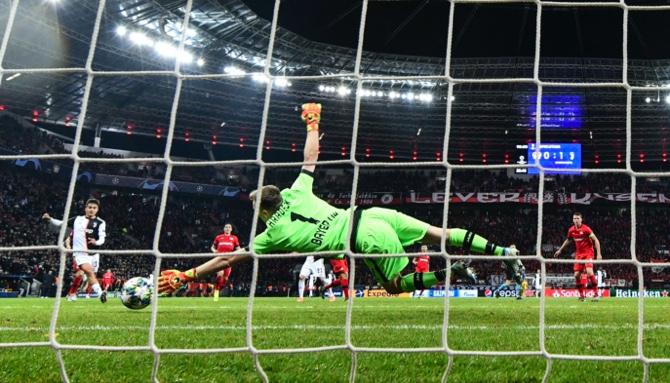 For the first time in history only five countries will be represented in the last 16 of the Champions League.

Atalanta and Atlético Madrid became the last two teams to qualify for the knockout stages yesterday [Macau time], meaning all 16 teams are from Europe’s “big five” of Italy, Spain, Germany, England and France.

Atalanta knew it needed a win to overtake Shakhtar and took the lead through Timothy Castagne in the 66th minute. Mario Pašalić doubled Atalanta’s tally shortly after Shakhtar defender Dodô was sent off for a slap on Remo Freuler.

Atalanta finished second in Group C with seven points in its debut season in the competition. Group winner Manchester City beat Dinamo Zagreb 4-1, which meant Shakthar finished third in the group and will enter the Europa League knockout stage.

Teenage forward João Félix and defender Felipe scored a goal in each half to help Atlético clinch second place in Group D. Juventus advanced as the group winner.

Atlético would have advanced even with a loss as Bayer Leverkusen lost 2-0 to Juventus.

Juventus was already assured of topping Group D and seemed sluggish at times in Germany, before Ronaldo scored from close range off substitute Paulo Dybala’s cross in the 75th minute. It was the Portuguese star’s second goal in the Champions League this season.

Bayern Munich finished the group stage as the only team to win all its matches after beating Tottenham 3-1 in a game between two already-qualified sides.

Two-and-a-half months after getting thrashed 7-2 by Bayern in London, Tottenham at least managed to keep the scoreline respectable as recently hired manager Jose Mourinho fielded a weakened lineup with his team guaranteed second place.

Kingsley Coman and Thomas Müller scored for Bayern in the first half, either side of a first goal for Tottenham by offseason signing Ryan Sessegnon.

Philippe Coutinho, who struck the crossbar with a long-range effort in the first half, curled home a third goal in the 64th minute to clinch a sixth straight win in Group B for Bayern, whose poor recent form in the Bundesliga has seen Germany’s biggest team slip to seventh place.

Neymar scored one goal and helped create three more as Paris Saint-Germain completed its group campaign with a 5-0 win over Galatasaray.

Neymar even started the move which led to his goal just after halftime, finding Kylian Mbappe with a pass and taking the France star’s back-heeled return before rifling the ball into the top corner from inside the area.

PSG was already qualified before the game as group winner and topped Group A with 16 points, five ahead of second-place Real Madrid, which won 3-1 at Club Brugge.

Club Brugge finished above Galatasaray and in third spot to qualify for the Europa League. DANIELLA MATAR, MILAN, AP