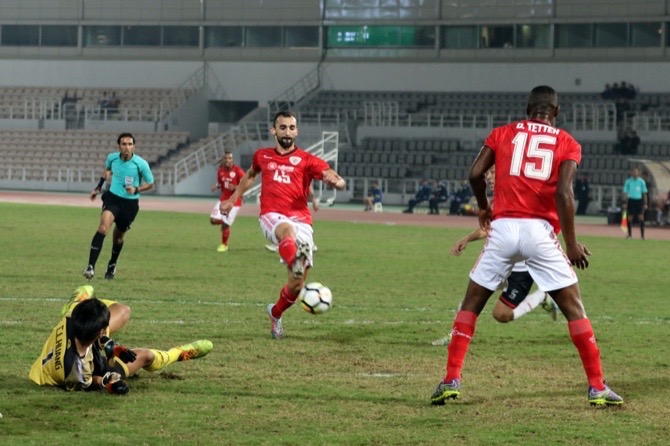 Leonel Triesto attempts to score a goal against the Taiwanese side

After the historic victory against Taiwan’s Hang Yuen FC on Wednesday evening, it is already time for Benfica de Macau to focus on next week’s Asian Football Confederation (AFC) Cup match, to be held in the North Korean capital, Pyongyang.

Benfica became the first local club to participate and win its debut match in the group stage of the AFC Cup, an annual competition between Asian national clubs. But there is another challenge ahead.

Benfica’s coach, Bernando Tavares, says it will be hard to set up a squad for the match in Pyongyang, given that some local players are not professional.

“We know that will be very difficult. I don’t even know who the players are that I can count with [count on to be available],” Tavares said during the press conference. Many of the players need to take leave from work in order to represent the local team at next week’s match against North Korean side Hwaebul SC.

Questioned by the Times in the post-match press conference, Tavares said, “I don’t know yet which players will be available, we need to gather the troops and see who can get authorization to skip work and then set up a strategy and pack our bags on our way to [North] Korea,” further adding, “We know that for us it is much easier to play at home than away but that can work as an added motivation for our team.”

Tavares mentioned that in the upcoming match, Benfica will face a “quite different team when compared to the Taiwan [Hang Yuen FC] team, very strong physically,” but noted, “What I know is that if we managed to turn 0-2 to 3-2 [tonight] you must also believe in this team because I believe. The opponents might be strong but they don’t have our will to win.”

Another issue Tavares is aware of in the lead-up to the North Korea match was the fact, “we have very little access to videos of the team,” he said, noting that it is “[nearly] impossible to find records of the games of Hwaebul SC.” He added it will be very hard to know what to expect from the North Korean team.