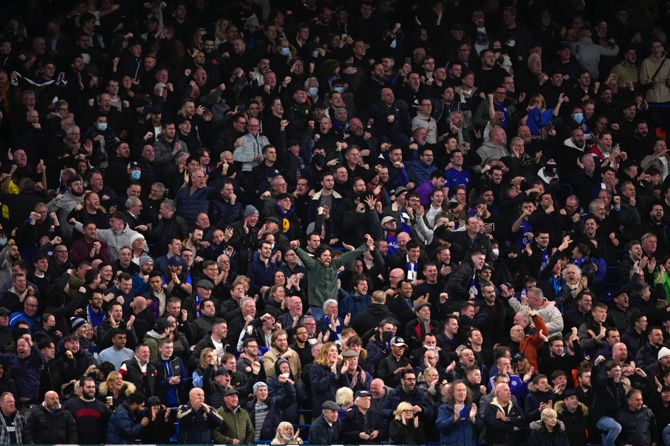 Coming to watch his beloved Chelsea since the 1960s, Gary Owen has witnessed first-hand the changing matchday experience.

From the dangers that saw soccer fans penned behind barbed wire — and threatened with electric fences — to stadiums becoming too placid, the 63-year-old Owen had been lamenting the loss of the raw passion of Stamford Bridge.

For the first time since Premier League stadiums were ordered to be all-seater in 1994, Owen and thousands of other Chelsea supporters could legally stand again on Sunday — without being ordered to sit.

Chelsea’s stadium was the pioneer as trials began with the visit of Liverpool with what’s called “safe standing” in the Shed End where Owen had a ticket, and in a stand behind the other goal.

“It brings back the old days,” the 63-year-old Owen said. “It might create a bit more atmosphere. Football now has gone a sort of corporate way, so you lose the old-fashioned atmosphere.”

It would have been hard to keep fans off their feet as Chelsea conjured a comeback to draw 2-2 with Mateo Kovacic and Christian Pulisic scoring in a high-intensity clash with Liverpool.

“Sitting is like being in your front room, which is not the same,” Owen said. “I think a lot of grounds you go into, they’ve lost the atmosphere when you used to come here 30 years ago, this place used to go mad, jumping at the rafters. But now it’s really, really quiet from what it used to be.”

All-seater stadiums became mandatory in the top two tiers of English football following safety recommendations made after the crush at Liverpool’s 1989 FA Cup semifinal against Nottingham Forest at Hillsborough Stadium that led to the deaths of 97 fans.

“We have learnt a lot of lessons since the Hillsborough tragedy, and football has been as safe in the last 30 years as it has ever been,” said Chief Constable Mark Roberts, who leads on football policing in England. “However we must not get complacent and, whenever measures such as this are introduced, the safety of those attending football must be absolutely paramount to any decisions made.”

So much has changed since then, with the inception in 1992 of the Premier League which has become the wealthiest soccer competition in the world and spurred investment in stadiums.

“Things have moved on, obviously for the better because the old days we had a bad reputation,” Owen said.

The government determined that now was the time to start testing procedures for fans to no longer be required to sit.

“It’s the evolution of football,” Sports Minister Nigel Huddleston said. “What we’re not doing is going back to the old days of terraces — this is very, very different.

“Everybody has a seat, and there are bars in front and behind them, and that’s really good because that will stop any surges going backwards or forwards, particularly in those heightened moments when there’s a goal or something. So this is safe standing — exactly what it says on the tin.”

Police are more cautious over new risks potentially being introduced, especially after some England fans highlighted the dangers of areas becoming overcrowded after violently forcing their way into the European Championship final against Italy at Wembley Stadium in north London in July. ROB HARRIs, London, MDT/AP