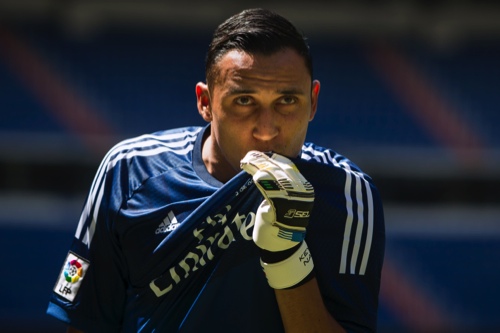 Costa Rica international goalkeeper Keylor Navas, kisses his Real Madrid t-shirt as he poses during his official presentation at the Santiago Bernabeu stadium in Madrid, Spain

Real Madrid unveiled its new goalkeeper Keylor Navas after he signed a six-year contract with the Spanish club.
The 27-year-old helped Costa Rica reach the quarterfinals of the World Cup for the first time this summer in Brazil.
At his presentation, Navas said he sees an opportunity to “learn from the best,” with Iker Casillas and Diego Lopez already part of coach Carlo Ancelotti’s first-team squad. Speculation in the Spanish media has hinted at Lopez’s exit to make room for Navas.
Madrid announced the deal on Sunday after reaching an agreement with fellow Spanish club Levante reportedly worth EUR10 million (USD13.4 million).
Navas was greeted by thousands of fans on Tuesday, many waving Costa Rica’s flag, before he hurled balls into the sunny Santiago Bernabeu stands. He donned a blue goalkeeper jersey with his name and the No. 13 on the back, which he is set to wear for Madrid this season.
Navas himself was then bombarded by the media about whether he was prepared to face the scrutiny of being Madrid’s goalkeeper after the schism caused by Casillas being reduced from full-time starter two seasons ago. Each time, Navas answered that he was “calm” and focused on learning all he could from his teammates.
“I have always had the idea of looking up to them,” Navas said. “I have followed Casillas and Lopez, who have shown for years they are the best in the world. Being in (the) Spanish league, they are references for my career and I can learn a lot from both of them.
“I think it will give (the team) more alternatives. I hope it will be for the best of everyone.”
Madrid club president Florentino Perez lauded Navas for his “brilliant career” before saying that he now faces his “biggest challenge.”
Navas’ goalkeeping helped Costa Rica make its surprising run at the World Cup, where the Central American minnow beat Uruguay, Italy and Greece before losing a penalty-kick shootout to the Netherlands. Navas made a string of saves in that quarterfinal in which Costa Rica held the Dutch to a goalless draw through 120 minutes.
Before his stellar World Cup, Navas was the Spanish league’s standout goalkeeper last season, when he helped a modest Levante side avoid a relegation fight and finish 10th in the 20-team competition. Rare was the weekend that didn’t feature a spectacular save by Navas. Any possible doubts about how he would perform under the pressure of a bigger club were apparently dispelled by his performances in Brazil.
Navas is Madrid’s third signing of the summer after the Champions League winner signed Germany’s World Cup winning midfielder Toni Kroos and Colombia forward James Rodriguez, who also shone at the World Cup.
If Lopez leaves, Navas would vie for playing time with Casillas. Casillas is under pressure to recover from his poor showing at the World Cup with Spain.
Ancelotti had said before Navas’ signing that Casillas would start the European Super Cup against Europa League winner Sevilla on Aug. 12. AP