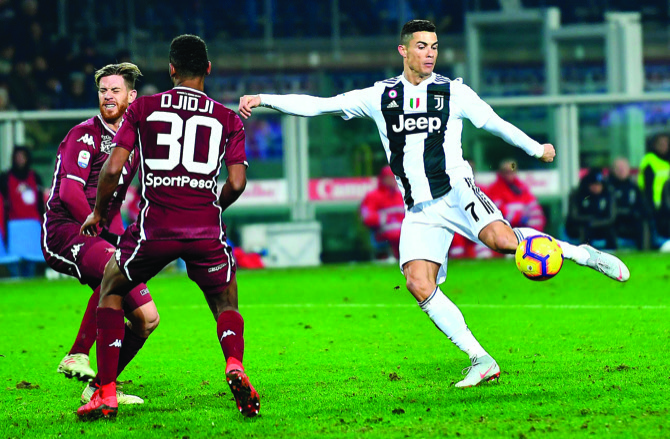 Juventus reached another landmark this weekend — and it was fitting that Cristiano Ronaldo was the player to do it.

But contrasting sides of the five-time world player of the year were on show in the Turin derby.

Ronaldo converted a 69th-minute penalty in Saturday’s 1-0 win at Torino as Juventus became the first club to score 5,000 goals in Serie A.

“I’m happy, but what matters most is having helped the team to win,” Ronaldo said immediately after the match, when asked about scoring the landmark goal.

The Portuguese star also celebrated the occasion on Twitter.

“Historic win, important achievement, historic achievement… 5000 times Juve” Ronaldo wrote, along with a photo of him scoring the penalty.

Juventus remained eight points ahead of second-placed Napoli as the Bianconeri continued their seemingly unstoppable march to a record-extending eighth straight Serie A title.

It was also an important goal personally for Ronaldo.

The 33-year-old has been playing and scoring regularly this season and showing little sign of being affected — on the field at least — by a rape allegation in the United States.

However, Ronaldo had failed to score in his previous two games, the first time that had happened since September.

Ronaldo was visibly relieved when the goal went in, especially as Salvador Ichazo had got a hand to it, and he ran up and chest-bumped the Torino goalkeeper. Ronaldo, who was booked for that, appeared to immediately regret his actions and gave Ichazo an apologetic hug.

Italy forward Mario Balotelli commented on Instagram: “If I had done that…. goodbye!”

It was Ronaldo’s 11th Serie A goal, moving him second in the goalscoring charts, one behind Genoa forward Krzysztof Piatek.

Kathryn Mayorga filed a civil lawsuit in September in Nevada claiming Ronaldo raped her in his Las Vegas hotel room in 2009. Police reopened an investigation into the allegation at her request. Ronaldo has denied any wrongdoing.

He was forced to bring on Mertens, Callejon and Insigne during the second half and Napoli clearly improved.

Mertens won the free-kick which Arkadiusz Milik curled in during stoppage time to send Napoli to a 1-0 win.

The Belgian international also provided an earlier cross which Milik headed onto the crossbar.

“I chose a fresher starting lineup in order to rest those who had used a lot of energy in Liverpool and to have more energy during the match,” Ancelotti said. Daniella Matar, Milan, AP