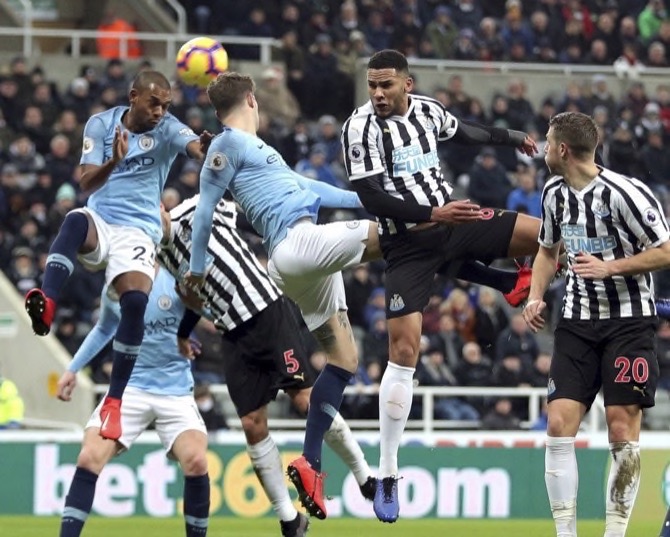 Rafa Benitez never won the Premier League in his six years with Liverpool but he has done his old team a huge favor in its bid to end a 29-year wait for English soccer’s biggest prize.

Newcastle, the injury-hit and relegation-threatened team now managed by Benitez, pulled off one of the surprise results of the season by coming from behind to beat Manchester City 2-1 yesterday [Macau time].

City squandered a lead for the third time this season — this one at St. James’ Park arrived after just 24 seconds through Sergio Aguero — and the champions have lost their sheen of impregnability as they bid to retain the league title for the first time.

They stayed four points behind Liverpool, which can extend its lead to seven by beating Leicester at Anfield on Wednesday. There are just 14 matches for both teams after that.

“When you are behind you have to win games, and we couldn’t do that,” said Guardiola, who remarked before the game that one slip-up would leave City’s title hopes “almost over.”

It was a disappointing night for Manchester all around.

Manchester United’s interim manager, Ole Gunnar Solskjaer, was looking to become the first coach to win his first seven matches in charge of a Premier League team and continue his perfect start to managerial life at his former club.

That’s one record he won’t be holding after Burnley — a team fighting relegation like Newcastle — surprisingly drew 2-2 at Old Trafford, with United scoring goals in the 87th minute through Paul Pogba’s penalty and the second minute of injury time through Victor Lindelof to salvage a draw.

Still, the way United kept fighting and scored late goals will be viewed as a positive by United’s hierarchy as it weighs up whether to give Solskjaer the job on a full-time basis.

“The comeback was brilliant,” said Solskjaer, who was seeking a record-extending ninth straight win in all competitions to open his interim tenure. “The players have been asked about how they would react if they went 1-0 or 2-0 down, so I felt the comeback was fantastic.”

United fell two points behind fifth-place Arsenal, which beat Cardiff 2-1, and fourth-place Chelsea, which plays away to Bournemouth on Wednesday, in the race for the four Champions League qualification spots.

It was Cardiff’s first game since the disappearance of its new striker, Emilano Sala, and it was an emotional occasion for the Welsh club at Emirates Stadium as tributes were paid to the Argentine player.

Cardiff manager Neil Warnock and his staff wore daffodils — a national emblem for Wales — and the yellow flowers were handed out to both Cardiff and Arsenal fans before the game. The away fans held up a large banner reading: “We never saw you play and never saw you score, but Emiliano our beautiful Bluebird we will love you forever more.”

There was a minute of silent reflection for Sala and David Ibbotson, the pilot of the small passenger plane that was carrying the Argentine striker to Cardiff from his former French team, Nantes, when it disappeared over the English Channel last week.

Arsenal strikers Pierre-Emerick Aubameyang and Alexandre Lacazette both scored in the second half, with Nathaniel Mendez-Laing pulling a goal back in injury time for Cardiff.

Marko Arnautovic left the stadium on crutches and wearing a protective boot after an unhappy return to the West Ham team.

The Austria forward missed West Ham’s last two games after he was tempted to accept a lucrative offer from a Chinese club. On Friday, he said he was staying at West Ham and signed a new contract the following day, saying he couldn’t wait to get back playing for the London club.

He was recalled three days later but played only 77 minutes in West Ham’s 3-0 loss at Wolverhampton Wanderers before going off with a right leg injury. Mexico striker Raul Jimenez scored two of Wolves’ goals as they climbed to seventh place.

Fulham boosted hopes of avoiding relegation by coming from two goals down after 17 minutes to beat Brighton 4-2. Aleksandar Mitrovic scored two of the goals for next-to-last Fulham, which is five points from safety.

Huddersfield looks doomed, though, after a 1-0 home to loss to Everton that marked a disappointing start to his tenure for new coach Jan Siewert. Steve Douglas, AP