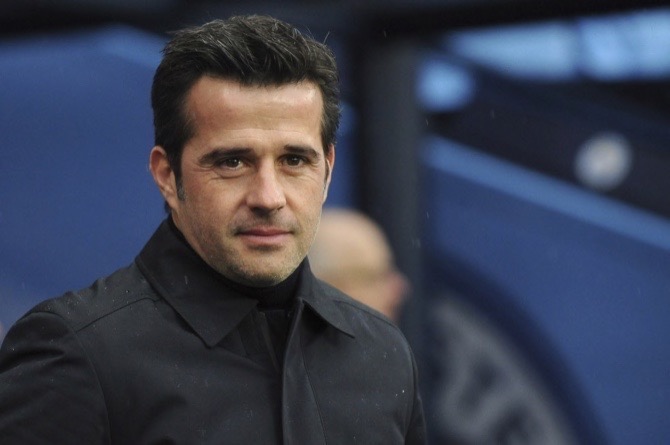 Nicknamed the “Mini-Mourinho” after his illustrious compatriot, Marco Silva arrived in the Premier League in January 2017 as the slick, sharp-suited and smooth-talking coach with progressive ideas and a track record of success.

Two years and three clubs later, English soccer is starting to wonder if he is worth all the acclaim.

Silva is the latest top-flight coach to come under big pressure, after Everton’s slump in results in the league was followed this weekend by elimination from the FA Cup by an opponent in the lower reaches of the second tier.

It isn’t even February and Everton’s season already has been reduced to a fight for seventh place in the Premier League.

If the Silva experiment fails, you start to wonder where Moshiri and the club go next.

The Portuguese coach was targeted by Moshiri more than a year ago as the man to take Everton, which last won a trophy in 1995, to the next level. Even if that meant waging what turned out to be an ugly battle for his services with Watford, where Silva was the manager at that time.

Aware of Everton’s interest, Silva lost focus and after a strong start to last season — Watford at one stage was fourth in the Premier League — the team went on a slide. Silva was fired in January, a year ago last week.

Everton eventually got its No. 1 target in the offseason after muddling through the second half of last season with a temporary, and unpopular, coach in Sam Allardyce. But there’s been no upturn under Silva.

After its first 23 league games under Silva, Everton has won 30 points. Allardyce, and indeed previous managers Ronald Koeman and Roberto Martinez, all won more in the same period.

It is only now, after Saturday’s 3-2 loss to Millwall in the FA Cup, that the criticism is really ramping up on Silva.

Everton is 11th in the league after two wins in the last 10 games, three points off seventh place but 14 points off sixth-place Manchester United. Lose today against Huddersfield — the last-place team without a win since November — and the heat will increase on Silva.

Speaking at the club’s recent annual general meeting, Moshiri said he had “put a big bet on Marco” and that he retained his “total support.”

“I look at the table and it is just not good enough, I think we know that,” Moshiri added. “We need to go up the table. We need to utilize the fans’ impatience to drive the club.”

But there is no sign things are about to get better.

One of Everton’s weak points has been its defending, especially on set pieces, and conceding two late goals off free kicks to lose at Millwall underlined the point. Silva is known for his strong work ethic and intensity on the training ground, but he seems to have a blind spot.

Everton has one clean sheet in its last 12 games, a run which has included a 6-2 home loss to Tottenham that could easily have been bigger.

Silva’s team has tried to play an attractive style but the central midfield — in his favored 4-2-3-1 — looks too open, with anchorman Idrissa Gueye often isolated and overwhelmed. Up front, Everton has never properly replaced Romelu Lukaku, who joined Man United in the offseason of 2017, and Silva has resorted to playing Richarlison as sole striker despite the Brazilian better coming in off the left wing.

Another area of concern is the inconsistency of goalkeeper Jordan Pickford, who hasn’t been able to reproduce his impressive performances with England at last year’s World Cup.

Silva rose to prominence with Estoril in Portugal, which he guided from the second tier to the Europa League. Since then, he’s had one-season spells with Sporting, where he won the Portuguese Cup, and Olympiakos, where he won the Greek league title.

In the Premier League, he spent six months at Hull, which he failed to keep from relegation despite improving its results, and then another six months at Watford.

Everton supporters couldn’t wait to see the back of Allardyce, whose defensive and pragmatic style of play got the results needed to push Everton away from relegation trouble but was never going to endear himself to a fan base eager for attractive soccer.

Silva’s Everton is at the other extreme, with the team now looking fragile and so easy to penetrate.

If results don’t improve, Silva could be looking for yet another job, probably away from England this time. Steve Douglas, AP