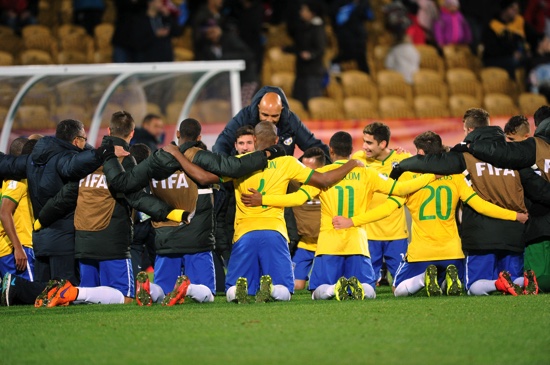 Former champions Germany, Portugal and Brazil earned places in the quarterfinals of the Under-20 World Cup yesterday, bringing more familiar names to a last-eight lineup that includes a number of upstarts.
Mali, Senegal, the United States and Serbia all made their way into the quarters on Wednesday, and Uzbekistan became the fifth qualifier yesterday before the more traditional powers asserted themselves.
Yesterday’s round-of-16 matches began with another upset when Uzbekistan beat Austria 2-0, but order was restored when European champion Germany defeated Nigeria 1-0, two-time champion Portugal ousted New Zealand 2-1 and five-time champion Brazil overcame Uruguay 5-4 on penalties.
The tournament had already seen South American champion Argentina and CONCACAF champion Mexico fail to progress beyond the group stage.
And none of the three remaining powers had it easy yesterday. Germany held on by protecting its lead for 70 minutes, Portugal needed an 87th-minute goal to advance and Brazil was held 0-0 before prevailing in the shootout.
Rodrigo Amoral, the second penalty-taker for Uruguay, sent his attempt over the crossbar, while Brazil made all five of its attempts.
In the quarterfinals, Brazil will play Portugal, Mali faces Germany, the U.S. takes on Serbia and Uzbekistan will play Senegal.
The match between Germany and Nigeria had been billed as one of the best matchups of the tournament so far, but produced little to make it memorable.
Levin Oztunali scored the only goal in the 19th minute as Nigeria, which has won the Under-17 World Cup four times, left still searching for its first title at the U20 level.
The goal came after Marc Stendera dispossessed Kingsley Sokari and found Oztunali at the edge of the box. Oztunali, the grandson of Uwe Seeler, scored with a powerful left-footed shot.
Portugal advanced after three wins in group play but was stretched to its limit by 138th-
ranked New Zealand.
Raphael Guzzo put Portugal ahead after 24 minutes, but New Zealand thrilled the home fans when Stuart Holthusen equalized in the 61st.
Gelson Martins won the game for Portugal when he weaved his way past two defenders before curling shot with outside of his boot just inside the left-
hand post from 20 meters.
Dostonbek Khamdamov scored twice within 10 minutes for Uzbekistan, putting his team ahead in the second minute of the second half and adding the second in the 67th.
“After the match I told my players ‘thank you, but this is not enough,’” Uzbekistan coach Ravsham Khaydarov said. “We’ve only matched our performance from 2013 (or reaching the quarterfinals). Of course we came to improve on this result and all the players know about it.”
Austria coach Andreas Heraf said Uzbekistan was “too strong for us today”.
“They were physically extraordinary and their speed was extraordinary too so we had problems in these two departments,” Heraf said. “They studied us very well from our group games.” Steve McMorran, Wellington, AP