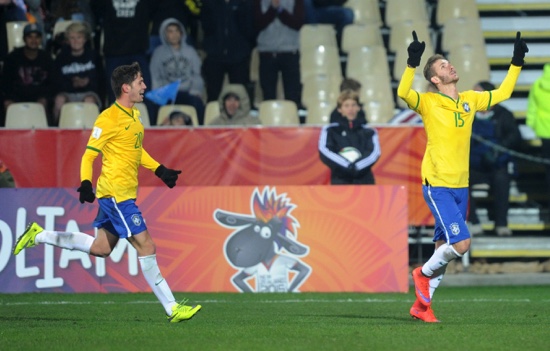 Leo Pereira, right, celebrates with teammate Jean Carlos after scoring a goal during their U20 football World Cup match against North Korea

A dominant performance full of goals was exactly what Brazil’s under-20 football side needed ahead of Saturday’s final. The five-time champions thrashed Senegal 5-0 yesterday to go into the championship match against Serbia on a high.
Brazil sneaked past Uruguay in the round of 16, then Portugal in the quarterfinal — both via penalty shootouts after 0-0 draws — and questions were starting to be asked about its attack.
They were well and truly answered yesterday as they scored twice in the opening seven minutes and extended its lead to 3-0 before the 20-minute mark.
Marcos Guilherme scored twice while Boschilla and Jorge also had goals for Brazil which opened the scoring via an own goal.
“It was really important for us,” coach Rogerio Micale said. “We were creating chances, as we did against Uruguay and against Portugal a little bit less. We were creating, but not scoring. (Against Senegal) we were really effective in front of goal and that’s why we scored many goals. And that’s really good for us because it gives us confidence to the final.”
Micale said the transition between his defenders and attackers was perfect, and it would give them a much-needed confidence boost for the final.
While the Brazilian attacking flair returned, it is the side’s defense which has been the biggest help to get Brazil to its ninth under-20 final.
Brazilian goalkeeper Jean has not retrieved the ball out of the back of his net since the eighth minute of the team’s second game against Hungary.
Brazil has now gone 502 minutes — more than eight hours — without conceding. The defense is organized but it’s not just the back four working hard, Micale said.
“Our system is working perfectly,” he said. “Our style starts with our forwards, we all defend. That’s why we have such a strong defense. All the team, from the front to the back is working for the defense. When we can’t score goals it keeps us in the game, and now we score goals too.” Matt Richens, Christchurch, AP

Serbia is through to Saturday’s Under-20 World Cup final against Brazil after beating 10-man Mali 2-1 after extra time at North Harbour Stadium yesterday. Milos Veljkovic’s header found Ivan Saponjic, who nodded the ball past Mali goalkeeper Djigui Diarra to give the Serbians a 2-1 lead with 20 minutes of extra time to play. Serbia previously won the under-20 title competing as Yugoslavia in 1987.