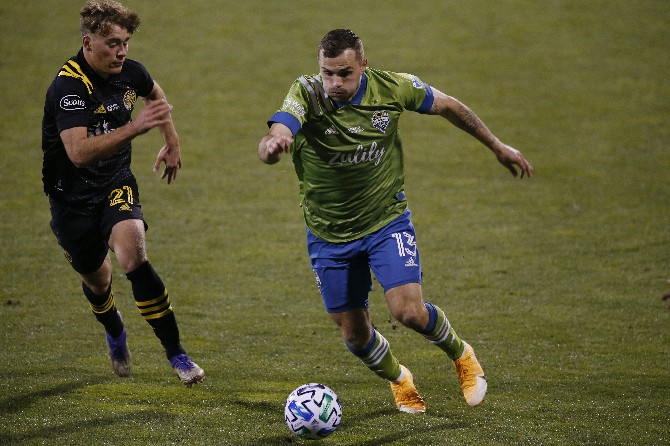 A day after last week’s deadly riot in the Capitol by a pro-Trump mob, players from the U.S. soccer team gathered in Bradenton, Florida, and considered what they could do to set a positive example for a shaken country.
“I think obviously we all realize how horrific those events were, and we all understand that there’s a need for a change in this country in a lot of ways,” forward Jordan Morris, one of the veteran players in camp, said during a news conference yesterday [Macau time]. “The big thing for us, and I’ve talked to guys about a little bit, is hopefully as a national team, is to be a positive representation of what that change can be and how we get to move forward. And I think it’s also in these hard times we hope to be as a team — hopefully in a positive light.”
Coach Gregg Berhalter said he has not yet spoken to players about the events in Washington.
“This is a low point for us. There’s a lot of room to improve as a country, and it’s something where we can all be better examples. We could all be better citizens,” Berhalter said. “We’re watching that. It doesn’t jibe at all with what we know America to be. It’s not who we are as a country. And it’s disappointing to see.”
The young U.S. player pool is preparing for a possible exhibition on Jan. 31 against Serbia, although that match has not been finalized.
Because of the coronavirus pandemic, the start of World Cup qualifying has been delayed by a year until September 2021, when the Americans are likely to open at Trinidad and Tobago, where an October 2017 loss ended their streak of seven straight World Cup appearances.
A full player pool is likely to be available for a pair of March exhibitions, probably in Europe, and for the CONCACAF Nations League semifinal against Honduras in June, followed by the final or third-place match, against Mexico or Costa Rica. That is followed by the CONCACAF Gold Cup starting July 2, likely with a younger roster.
Berhalter watched two notable performances this month by from Americans in Europe.
Matthew Hoppe, a 19-year-old forward who has not played at any national team level, became the first American to score a hat trick in Germany’s Bundesliga. Hoppe got three goals in his fifth league match, helping Schalke beat Hoffenheim 4-0 Saturday for its first league win in nearly a year.
Born in Yorba Linda, California, Hoppe played in a Barcelona-affiliated development academy in Arizona. Hoppe was in plans for the under-20 team last year before the pandemic.
“What I really liked is the transition moments, the moments when he won the ball,” Berhalter said. “The space behind the defense, he was able to take advantage, that really clever movement. And then when he got in position to score goals, he finished them off with cleverness.”
Zack Steffen, a 25-year-old who has become the top goalkeeper on the national team, made his Premier League debut in Manchester City’s 3-1 win over Chelsea and American midfielder Christian Pulisic on Jan. 3. RONALD BLUM, MDT/AP