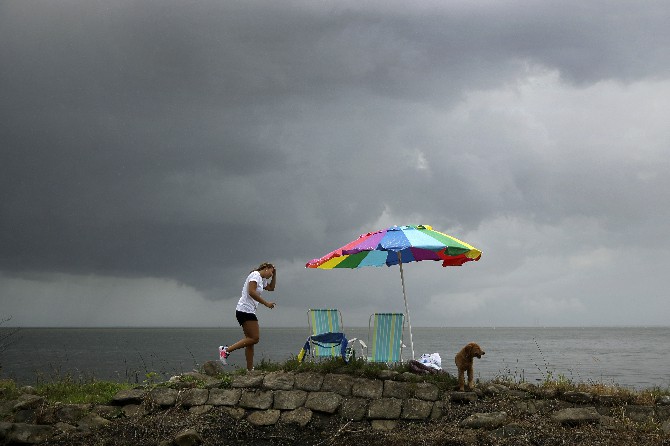 A woman walks to her spot along Indian Creek Lagoon in a Titusville, Florida to watch the launch of SpaceX Falcon 9

For the spectators gathered along the Space Coast for an astronaut launch, the rumbling thunder, darkening clouds and then a drenching downpour were more worrisome than any pandemic.
But neither kept crowds from jamming favorite viewing spots in parks and area beaches.
At a park in Titusville with a clear view of the Kennedy Space Center launch pad 15 miles away, hundreds of spectators huddled under tents and umbrellas during on-and-off drizzle before the launch was called off because of the weather.
It would have been the first launch with astronauts from Florida in almost a decade, and the first by a private company, SpaceX. The next attempt is Saturday.
NASA and SpaceX had urged spectators to stay at home for safety reasons. But officials in Brevard County, home to the Kennedy Space Center, rolled out the welcome mat in an effort to jump-start a tourism industry hit hard this spring by coronavirus-related lockdowns.
About a third of the people at Space View Park wore masks as encouraged by health officials to help stop the spread of the new coronavirus.
The Brevard County Sheriff’s Office asked visitors to practice social distancing as they waited for the launch of astronauts Doug Hurley and Bob Behnken on a test flight of SpaceX’s Dragon crew capsule.
President Donald Trump and Vice President Mike Pence traveled to the space center for the launch, while the number of visitors inside was drastically curtailed.
About two hours before the scheduled launch time, a downpour sent many spectators running to their cars to wait out the storm. Pamela Anderson, her husband, Danny, and their granddaughter, Victoria, donned trash bags to serve as raincoats. They won’t be back Saturday since they have to be back at their home in Tennessee.
“We had lightning and thunder a lot, and then my phone went off and it said ‘tornado warning,’’’Anderson said. “We were just hoping for the launch. It would have been a lifetime experience.”
For Scott and Lisa Ward, the chance to watch a launch from Florida after a nine-year absence was worth a 125-mile drive from Okeechobee in the heart of Florida. He had watched several shuttle launches.
“That’s what it’s about, getting back to exploration,” said Scott Ward, who is retired.
Patricia Gottenger and Nelly Marro tied a rocket ship balloon to their lawn chairs as they set up a bit away from the rest of the crowd at the park. The Venezuelan natives wore face masks and acknowledged they picked a spot on the edge of the park as a safety precaution for their first launch.
“This is historic,” said Gottenger, who drove up from South Florida for the day with Marro.
Erin Gatz came prepared for both rain and pandemic. Accompanied by her 14-year-old daughter Regan and 12-year-old son Gavin, she brought face masks and a small tent. The children have faint memories of watching one of the last shuttle launches almost a decade ago when they were small.
Even though she had soaked feet from the storm, Gatz said she would be back on Saturday.
“Hopefully better weather,” said Gatz, who lives about an hour away in Deltona. “Ït’s Florida weather. In 15 minutes, it can change.” MIKE SCHNEIDER, TITUSVILLE (Fla.), AP