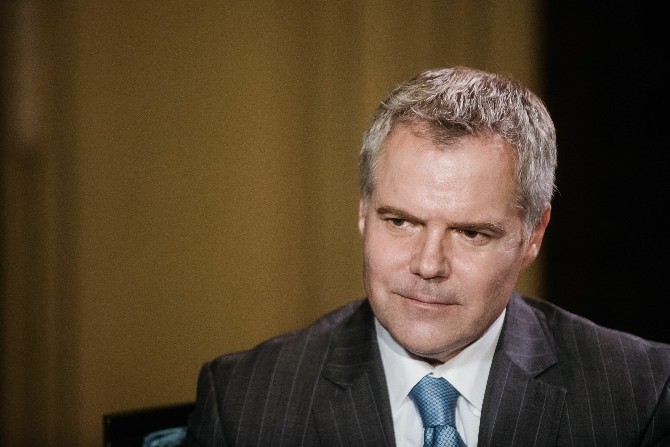 Former casino chief Jim Murren is preparing for his next act.
Murren, who led MGM Resorts International for more than a decade, has teamed up with former Morgan Stanley veterans Edward King and Daniel Fetters to pursue potential deals in online gaming, live events and other entertainment-related businesses.
“We’re going to be thoughtful and do our homework,” Murren said in an interview. “I’ve got a lot of good contacts in the financial industry and there is a lot opportunity.”
The trio are evaluating options including raising $300 million or more through a blank-check company, and have held preliminary talks with potential underwriters, according to people with knowledge of the matter. The initial public offering of a new special purpose acquisition company, or SPAC, could occur in coming months, said one of the people, who asked not to be identified because the deliberations are private.
The discussions are in their early stages and could involve partnering with institutional investors or buying a small company and building a bigger one through acquisitions, said Murren, who was a Wall Street analyst earlier in his career.
Andrew Pascal, a former Wynn Resorts Ltd. executive who is also the nephew of Elaine Wynn, has held talks to join the three but his involvement hasn’t been finalized and may not happen.
King and Fetters declined to comment, while Pascal didn’t immediately respond to a message.
Murren said he realizes the field of SPACs, where investors raise cash through a publicly traded vehicle to acquire a company they have yet to identify, was getting crowded, but believes his track record could make such an investment stand out.
Murren stepped down as CEO of MGM in March, after leading the largest casino operator on the Las Vegas Strip since 2008. He built the $9.2 billion CityCenter project there and other casinos in Macau, Massachusetts and Maryland.
He launched MGM’s online business and pushed the company intro broader entertainment with the T-Mobile Arena. He also repositioned MGM as an “asset light” operator of casinos after selling or spinning off much of the company’s real estate to others.
The executive, 58, said his noncompete agreement with MGM expires in March and he didn’t foresee any conflict with his new investment plans. MDT/Bloomberg