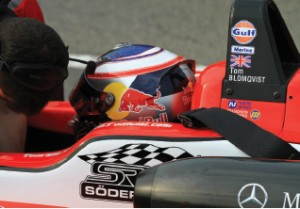 Tom Blomqvist has taken provisional pole position for the Formula 3 Macau Grand Prix as his Carlin team locked out the top two positions. The Briton, who finished runner-up in this year’s F3 European Championship, had traded the top spot with Max Verstappen and Lucas Auer early on.
But just before halfway through the 40-minute session, Blomqvist edged clear during a series of laps that pulled him clear of his rivals. Although team-mate Antonio Giovinazzi closed in on him, a great effort of 2m11.922 seconds in the final minutes was enough to leave him 0.155 seconds clear.
“So far so good, and I’m really happy with that,” said Blomqvist, who is taking part in his third F3 Grand Prix. “We’ve been pretty competitive from the off, and the car has felt good right from the start. 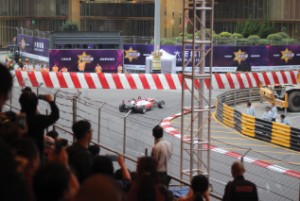 “There is still a long way to go, but we didn’t use any new tyres in that session so we are pretty well set for final qualifying.”
Behind Giovinazzi, T-Sport’s Nick Cassidy did an impressive job on his first visit to Macau as he ended up third quickest overall. Auer, who had been fastest in first practice, was fourth quickest in the end, ahead of Jordan King and Max Verstappen.
However, Verstappen knows that he is already slightly on the back foot having earned a two-place grid penalty for Saturday’s qualification race for missing a weighbridge check during opening practice.
Esteban Ocon has also earned an identical penalty for the same offence. He ended up 10th overall, having managed to get out in qualifying despite damaging his car in a collision with a stranded car during first practice.
Qualifying passed without any red flags, although there were two notable incidents. Martin Cao crashed at Fishermen’s Bend after 10 minutes, while Tatiana Calderon crashed at Police with 15 minutes of the session remaining.