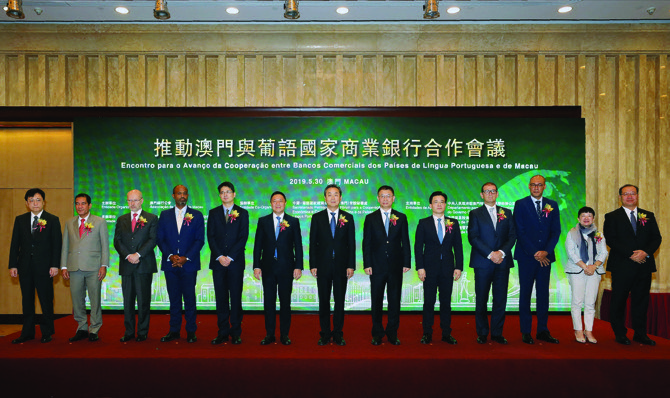 In the second symposium organized this year by the Forum Macau Training Center, a group of 26 participants from seven Portuguese-speaking countries joined a training session that lasted over a week on topics regarding financial cooperation within the bloc.

The symposium was divided into two parts, with the first including a visit to Hubei province where attendees participated in visits to local companies and exchange sessions with local businessmen.

The second part of the symposium included a series of activities in Macau, aiming to clarify and explore topics such as the Belt and Road initiative and the ways that financial cooperation, such as introducing policies in the banking, finance and insurance sectors, can boost the economy of these countries.

Besides Forum Macau, several local institutions and entities, such as the City University of Macau (City U), and the Macao Economic Services and the Monetary Authority of Macao among others, participated in the symposium. The local institutions and entities provided a series of theme-based talks on topics related to the initiatives, and ways to deal with specific issues when seeking support or financing.

At the closing ceremony of the symposium held yesterday at the MGM Macau Ballroom, the Deputy Secretary-General appointed by China, Ding Tian, highlighted that financial cooperation should be used as an agent for increasing cooperation between China and the Portuguese-speaking countries and “an effective tool for mutual benefits,” calling on to the trainees to “continue this work started here back in your countries.”

Pro-Rector of CityU Ip Kuai Peng brought attention to the purpose of the symposium, highlighting the idea that the cooperative measures utilized by the Macau Special Administrative Region (MSAR) government effectively contribute to Macau’s so-called “platform role” in the relationship.

“The MSAR government has been actively promoting finance and business development policies that would allow Macau to perform better in its role as the bridge between Macau, Portuguese-speaking countries and China,” Ip said.

Ip also noted that the 26 participants from the seven countries included “high-ranking government officials, high-ranking technicians and company administrators,” noting the importance of the event at several levels, and hinting that its outcomes were expected to have a high degree of utility.

A NEED FOR TRANSLATORS

During yesterday’s closing ceremony, Ding Tian revealed that Forum Macau has hired a total of five new Mandarin-Portuguese interpreters and translators. The new employees were hired in a recruitment process on the mainland and three of the five are already working with Forum Macau.

“We currently have three local interpreters and translators. In the previous recruitment process in China, five candidates were admitted and three of them are currently working. The remaining two are awaiting completion of the necessary formalities,” said Ding.

The official explained that the need for additional interpreters and translators comes from new roles attributed to the development and consolidation of Macau’s role as a service platform for trade cooperation between China and Portuguese-speaking countries.

According to a statement issued after the event, Forum Macau explained, “in the past fifteen years, there has been a steady increase in the activity of the Macau Forum,” which ran a total 90 activities last year.

As “the working languages in these activities are Mandarin and Portuguese, requiring a complex level of proficiency in both languages, it is necessary to hire experienced translators and interpreters proficient in both languages,” noting that this was the reason that professionals outside Macau were hired.

Forum Macau also added that they believe that “in the long-term development of the Macau Forum, it is necessary to recruit more Mandarin-Portuguese interpreter-translators to meet this [rising] need,” remarking that the process “will benefit local translators by allowing them to improve their skills.”

The institution also reaffirmed that the recruitment process of non-resident interpreters was conducted following all the rules and high standards. “In the future, we also intend to carry out the recruitment of local interpreters, with more locals being admitted, following the legal procedures, in order to improve the quality of local bilingual talents,” it pledged.