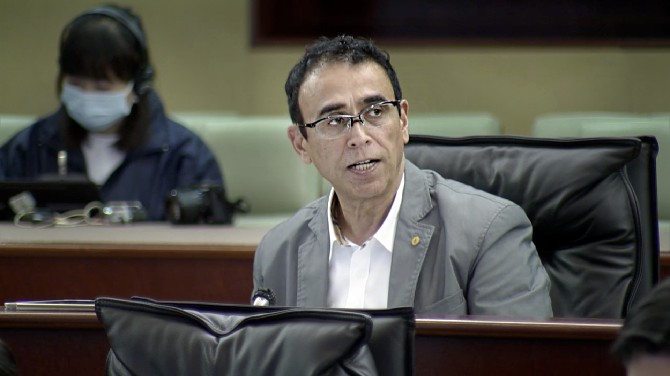 Four debate proposals from lawmaker José Pereira Coutinho have met with the same fate — all were voted down by his peers at the Legislative Assembly (AL).
The lawmaker was responsible for four of the five topics on agenda yesterday. He presented debate proposals on: amendments to Labor Law to better protect workers; the granting of an individual special bonus to frontline civil servants; the quality of construction of public housing building Ip Heng; and the varying terms for the retirement of civil servants.
All of the proposals were voted down by the majority of the lawmakers that comprise the plenary. Pereira Coutinho only able to get 10 to 12 votes in favor of his proposals, while the plenary gathered 17 to 19 votes against.
The proposal that prompted a broader discussion was the one calling for an amendment to the Labor Law.
Pereira Coutinho proposed a debate about how the law might be amended so as to better protect the interests of local workers — namely those working in casinos, hotels and other industries that, by having been more severely hit by the Covid-19 pandemic. The effects of the pandemic have caused some to lose part of their income and spend long periods laid off. Some have been fired without just cause.
On the topic, lawmaker Ma Chi Seng quickly led the opposition to dismiss the proposal, remarking: “This problem has to do with the pandemic and not with the Labor Law. It is useless to propose a review of the Labor Law.”
Ip Sio Kai followed, adding that “since the return to the motherland, the [relationship] between employees and employers has always been harmonious under this Labor Law.” He said that, in his opinion, the problems arising from the pandemic situation “can be discussed by the Standing Committee for the Coordination of Social Affairs.”
Ip reaffirmed his stance against the proposal, saying the debate “will contribute to creating division and conflict in the [community].”
Also against Pereira Coutinho’s proposal, was Mak Soi Kun, who said that such debate would not result in any real action that would help any worker.
Mak took the opportunity to say: “As a lawmaker, I have been providing this kind of help, and I already helped some workers, namely those suffering from work-related incapacities, to get their lawful compensation. We do not need any trade unions to do this job.”
Zheng Anting noted the timing as an important aspect, saying: “We are in the last period of this legislative term — we can’t just propose to review the law randomly like this.”
Zheng added that the government has already launched a series of measures to help local workers overcome this period and, as lawmakers, “[they] should present suggestions for more support measures instead.”
Sulu Sou sided with Pereira Coutinho, saying that, after hearing the reasoning of the other lawmakers, he thinks their rejection of the proposal comes from their lack of understanding of what a debate proposal is.
Sou noted that, contrary to what several lawmakers expressed, the existing issues are not just related to the pandemic. “[These issues] just got more highlighted [amidst] the pandemic. The Labor Law has flaws and there is space for improvements. We already realize this. The government lacks information on layoffs and so can’t take measures. We already understood this,” he concluded.Other proposals, such as the bonus to civil servants, were framed as unreasonable and as a populist move.
It is claimed that they would be highly discriminatory to many other professions that had “fought the same battle” as the civil servants during the pandemic while being completely disregarded.