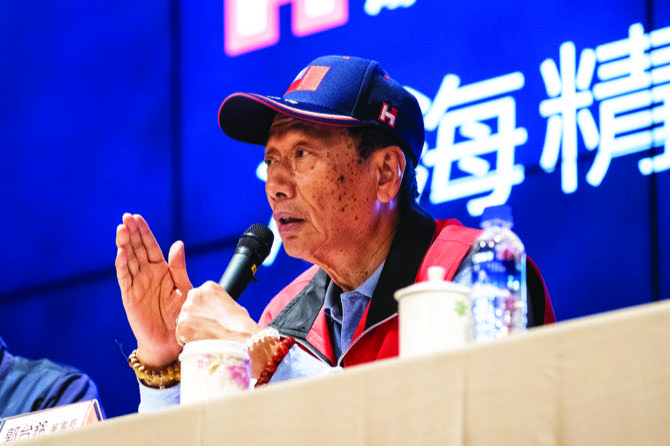 Billionaire Foxconn founder Terry Gou said he was considering a run for Taiwan’s presidency, adding a powerful symbol of Chinese business ties to the field of potential challengers against the island’s leader.

Gou, who amassed a personal fortune of about USD4.4 billion building iPhones on the mainland, said on the sidelines of a security forum in Taipei that he was weighing a bid to oust Taiwanese President Tsai Ing-wen. He would seek the nomination of the China-friendly Kuomintang, or Nationalist Party, should he choose to run, he said.

“If I am to make a decision, I will participate in the KMT primary,” Gou, 68, said yesterday at the event hosted by the American Institute in Taiwan – the U.S.’s de facto embassy – and Taiwan’s foreign ministry. The opposition KMT, which has controlled Taiwan for all but 11 years since World War II, was expected to choose a candidate in the coming weeks.

Gou plans to step down “in the coming months” as chairman of Foxconn Technology Group, which rose to global prominence as the main production partner for Apple Inc., Reuters reported Monday. Louis Woo, his special assistant, later told Bloomberg that Gou would be stepping back from operations and focusing on strategy, but didn’t plan to relinquish his chairmanship.

Hon Hai Precision Industry Co., Foxconn’s main listed entity, was up 0.8 percent to the highest since October 2018 at 1:06 p.m. in Taipei. Gou is Taiwan’s third-richest person and the 442nd in the world, according to the Bloomberg Billionaires Index.

Gou’s resources could help him stand out among a field of potential challengers, including former New Taipei City Mayor Eric Chu and Kaohsiung Mayor Han Kuo-yu. The KMT is vying to capitalize on Tsai’s apparent vulnerability as she struggles to navigate a global isolation push by Beijing and calls from within her own party for a more decisive break from the mainland.

China cut off official communication with Taiwan after Tsai’s Democratic Progressive Party ousted the KMT from the presidency and parliamentary majority in 2016, citing her refusal to accept that both sides belong to “one China.” The two sides have been governed separately since Chiang Kai-shek moved his Nationalist government to Taipei during the Chinese civil war.

Tsai is also facing a challenge for the DPP nomination by her former premier, William Lai, a vocal advocate of asserting the island’s formal independence.

While Gou’s wealth and notoriety could bring attention to the race, his business experience also presents political liabilities. At home, Gou has faced criticism for moving his factories across the Taiwan Strait, as one of the first outside executives to exploit cheaper wages and land costs on the mainland.

Foxconn’s Zhengzhou facility in central China employed hundreds of thousands of workers, cranking out more than 100 million iPhones every year. That success has been tinged with controversy, especially a series of suicides by employees that focused scrutiny on worker conditions.

Gou was also at the center of a plant project in the U.S. presidential swing state of Wisconsin that could provide a potential source of Democratic attacks against U.S. President Donald Trump in his re-election campaign. Trump and Gou touted Foxconn’s investment in the $10 billion factory as evidence of returning manufacturing jobs, but the company’s decision to shift the campus’s focus to research has cut the number blue-collar positions available.

Gou had previously played down the prospect of a presidential run, telling Hong Kong’s Phoenix Television last year that he could be more influential as a business executive than as a politician. He also said his status as the son of emigres who had come to Taiwan from China would make it harder for him to win.

“I didn’t sleep at all last night,” Gou said. “I am asking what I can do for young people.” Debby Wu, Bloomberg