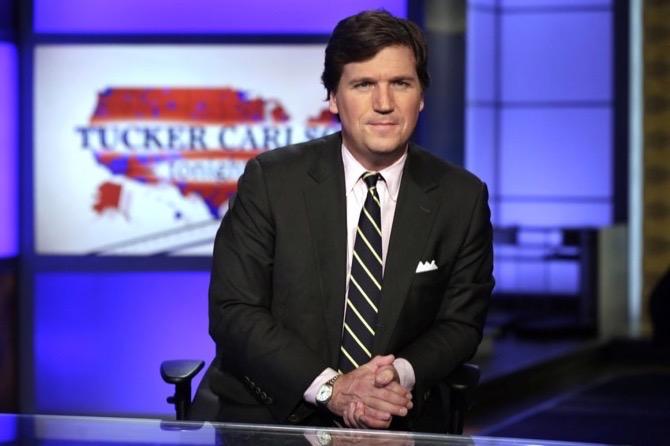 Carlson has faced criticism before for his commentary, including a statement that immigration has made America dirtier. His remarks Tuesday came with the nation rubbed raw by two weekend mass shootings and increased concerns by law enforcement officials about violence attached to white nationalism.

“He has used his platform to push out prejudice,” said Jonathan Greenblatt, CEO and national director of the Anti-Defamation League. “I think it’s disgusting and I don’t think it deserves a place on a major news network.”

Carlson’s prime-time show routinely draws more than 3 million viewers on weeknights, second only to Sean Hannity on Fox News. Episodes of his program landed among the Nielsen company’s list of Top 20 shows last week for both broadcast and cable television.

On Tuesday, he dismissed the concept of white supremacy as a serious problem for the country.

“The combined membership of every white supremacist organization — would they be able to fit into a college football stadium?” Carlson said. “I mean, seriously. This is a country where the average person is getting poorer, where the suicide rate is spiking.”

Adopting a low, mocking voice, he said, “’White supremacy, that’s the problem.’ This is a hoax, just like the Russia hoax. It’s a conspiracy theory used to divide the country and keep a hold on power. That’s exactly what’s going on.”

He said he’d “never met anybody who ascribes to white supremacy. I don’t know a single person who thinks this is a good idea. They’re making this up. It’s a talking point that they can use in this election cycle.”

The ADL’s Greenblatt said that it was “incredibly irresponsible to even make such a statement while we are still burying people who were gunned down by a white supremacist.”

On Sunday after the shootings in El Paso and Dayton, Ohio, a group of former National Security Council counterterrorism directors issued a statement calling on the government to address domestic terrorism with the same dedication it used to attack international risks following the Sept. 11, 2001 terrorist attacks.

Three of 65 killings committed in the United States in 2016 by people associated with bigoted or extremist ideologies were by white supremacists or the far right, according to the Center for the Study of Hate and Extremism at Cal State-San Bernardino. Last year, 17 of 22 such killings involved white supremacists or the far right. The numbers will be higher this year, the center said. MDT/AP