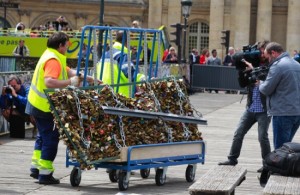 Lovers in Paris, beware: City authorities are taking down thousands of padlocks affixed to the famed Pont des Arts bridge. The city says the locks, usually hung by couples to express eternal love, are causing long-term damage to Paris heritage sites. Last summer a chunk of fencing fell off under their weight. Authorities began dismantling the metal grills along the sides of the bridge yesterday and plan to remove 45 tons of padlocks in all. Some residents had campaigned against the locks, which started appearing about a decade ago and now cover sites across the French capital. The Pont des Arts bridge will soon have padlock-proof plexiglass panels instead, while the city explores other ways for Paris visitors to express their “amour,” including street art on the subject. 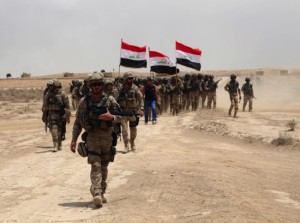 Three Islamic State suicide bombers targeted a police base in Iraq’s western Anbar province with explosives-laden Humvees yesterday, killing at least 35 police and Shiite militiamen, officials said. The attack on a police station in the Tharthar area north of the IS-held provincial capital, Ramadi, caused a large secondary explosion in an ammunition depot, the officials said. Another 40 security forces were wounded in the attack. Hospital officials confirmed the casualties. All officials spoke on condition of anonymity because they are not authorized to brief the media. The attack resembled a massive, coordinated assault launched on Ramadi last month that allowed IS militants to capture the city, marking their biggest gain since a U.S.-led coalition began launching airstrikes against the extremist group last August. In that assault, the IS group also used Humvees looted from Iraqi security forces. The loss of Ramadi prompted Iraqi Prime Minister Haider al-Abadi to order Shiite militiamen into the vast Sunni province, which was an insurgent hotbed during the eight-year U.S. intervention. The Shiite militiamen have played a key role in pushing the Sunni IS group back elsewhere in Iraq, but have also been accused by rights groups of carrying out revenge attacks against Sunnis, charges denied by militia commanders.