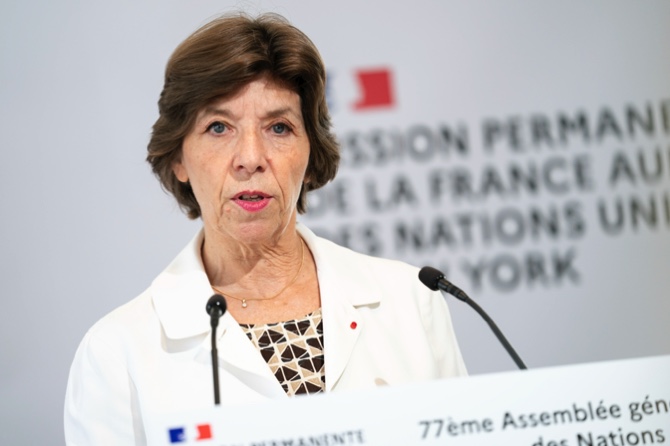 France’s foreign minister on Monday urged Iran to take the last offer on the table to revive the 2015 nuclear deal, saying the window of opportunity “is about to close.” A high-ranking European Union official said he didn’t expect any progress on the issue this week at the annual gathering of world leaders.

She gave no details. But under the treaty’s provisions, the five original nuclear powers — the United States, China, Russia (then the Soviet Union), Britain and France — agreed to negotiate toward eliminating their arsenals one day. Nations without nuclear weapons promised not to acquire them in exchange for a guarantee to be able to develop nuclear energy for peaceful purposes.

In 2018, then-President Donald Trump pulled the United States out of Iran’s nuclear deal with those five nuclear powers and Germany. The agreement placed curbs on Iran’s nuclear program in exchange for billions of dollars in sanctions relief, which Tehran insists it has never received.

The U.S. withdrawal raised tensions across the wider Middle East and elicited a series of attacks and incidents. Current U.S. President Joe Biden’s administration has been working to renew the agreement.

All the parties except Iran have stressed “that there will be no better offer on the table for Iran, and that the onus is really on Iran to make its decision,” Colonna said at a news conference on the sidelines of this week’s gathering of world leaders at the U.N. General Assembly.

She and other European foreign ministers met later Monday. After emerging from the meeting, EU foreign policy chief Josep Borrell said there were no new developments on Iran. And he said he expected “nothing will happen this week.”

“There’s a proposal on the table, and this proposal will remain on the table,” he said at a news conference. “I don’t see a better solution than the one that we have proposed.”

In an interview aired Sunday on CBS-TV’s “60 Minutes,” Iranian President President Ebrahim Raisi demanded guarantees that the U.S. would not withdraw again from a nuclear deal. As Raisi left Tehran for the General Assembly meeting, he said his delegation had “no plans whatsoever” to meet or negotiate with U.S. leaders.

On another nuclear issue, Colonna said France will convene a meeting Wednesday with U.N. nuclear chief Rafael Grossi on the precarious state of the Zaporizhzhia nuclear power plant in southeastern Ukraine. The plant, Europe’s largest, is occupied by Russia but still operated by Ukraine.

There has been shelling in and around the facility; Russia and Ukraine have traded accusations of blame for the strikes.

Colonna said she spoke to Russian Foreign Minister Sergey Lavrov on Monday morning about the need for Ukraine, Russia, and all countries in the world “to avoid a nuclear catastrophe.”

She said Lavrov seemed to be “open to listening to some detailed proposal” by Grossi, who has called for a “nuclear safety and security protection zone” around the Zaporizhzhia plant.

Colonna accused Russia of attacking the foundations of the United Nations by waging its unjustified war against Ukraine “in a very brutal way” with shelling of civilian targets, violent acts, “rapes, torture and forced liquidation.”

“All of these are war crimes,” she said.

The French minister said Russia is crossing three thresholds in the war: the legal threshold by violating U.N. Charter rules that call for peaceful settlement of disputes among states; the moral threshold “by the extent of the crimes committed in Ukraine”; and the political threshold by destabilizing global food and energy security.

Russia has said it launched its “special military operation” for the sake of Ukrainians, many of them Russian speakers, who Moscow said were being oppressed by their government. Putin declared that it was aimed at the “demilitarization” of Ukraine to remove a perceived military threat to Russia by “neo-Nazis” — rhetoric condemned by Ukraine and the West as a fictitious cover for an act of aggression.

Colonna also called on China to stop its “very aggressive” behavior toward Taiwan. She stressed that “the status quo must not be questioned by China and not by using means that are not peaceful.” Her comments followed a statement from Biden, broadcast Sunday on “60 Minutes,” that American forces would defend Taiwan if Beijing tries to invade.

China’s government on Monday denounced the U.S. president’s remarks, saying they violate a U.S. commitment not to support formal independence for Taiwan, a step Beijing has said would lead to war. Biden’s comment added to displays of official American support for the island democracy in the face of growing shows of force by the mainland’s ruling Communist Party, which claims Taiwan as part of its territory. EDITH M. LEDERER, UNITED NATIONS, MDT/AP