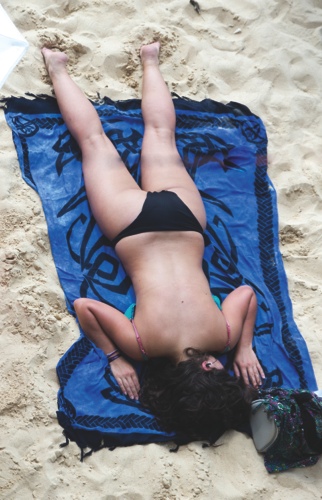 A Parisian woman takes advantage of the Paris Plage event, an artificial beach set up on the right bank of the Seine river

France’s summer is fast becoming a memory, and so is one of its iconic beach sights: the topless woman. As few as 2 percent of French women under 35 now say they want to bare their breasts, according to an Elle magazine poll this summer. It’s a far cry from the once-ubiquitous scenes of semi-nudity on the French Riviera, epitomized by 1960s blond bombshell Brigitte Bardot.
“It’s seen as vulgar. People are more prudish these days,” explains 60-year old Muriel Trazie, keeping her breasts out of the public eye while sunning herself on Paris Plages, the French capital’s summer beach. Sandra Riahi, 22, in a bikini, chimed in: “I’ve never done it. I’d be too embarrassed.”
In the 1960s, it took a country like France to make feminism sexy — and women did it by going topless on the beach. Men don’t have to wear bikini tops, so why should we? the feminists cried. The boundary-breaking became risque trend-setting — when photos of La Bardot posing topless in the Cote d’Azur were beamed around the world.
The frisson of fun only increased when toplessness was denounced by the Vatican and condemned by the Spanish church.
When France stood up to a conservative backlash and refused to ban topless bathing in the 1970s, wearing the “monokini” — the bikini bottom without the top — became a symbol of Gallic pride.
But times change, and so do bathing suits. Some link the demise of “le topless” to a simple change in French fashion styles — with a recent trend for full swimsuits, and ones that accentuate the bottom. But sociologists claim that the trend should be taken more seriously, with some suggesting that French women have forgotten the achievements of feminism.
“French young women today are more conformist. They’ve already attained freedom … So they’ve gotten lazy and taken it for granted,” said Jean-Claude Kauffman, author of “Women’s Bodies, Men’s Gaze. Sociology of Naked Breasts.”
Scholars point to the aging of the Generation X in France and a step back to traditional values among the more conservative “Millennial Generation.”
And where once authorities defended toplessness, there’s now an official push to restrict it.
In Paris, an official sign shows a faceless bikini-clad beauty posing on a pedestal. “In parks and gardens, we don’t forget to wear the TOP and the bottom,” says the sign recently put up in Paris’ Monceau Park, a popular sunbathing spot near the Arc de Triomphe.
Believe it or not, the decline of topless sunbathing has also been linked to the financial crisis.
“France has also been hard hit by austerity since the start of the financial crisis,” said Kauffman. “If breast-baring is a sign of risk and revolution, covering up is a sign of safety. In uncertain times, you always dress more conservatively.”
And it’s not just on the beach that breasts are out of fashion.
Cleavage became an affair of state this year when Segolene Royal — environment minister and former partner of President Francois Hollande — denied multiple reports she ordered female staff to “dress appropriately” and avoid revealing tops.
Elle magazine claims health concerns are the chief cause of toplessness’ new unpopularity, with increased awareness of skin cancer. Skin around the nipples, it says, is extremely delicate and easily damaged.
But like many things in our era, others just blame Twitter. Nathan Assouline, a 22-year-old beach monitor at Paris Plages, said some sunbathers could be discouraged by the rise of phone cameras, and the fear their bodies could end up in a stranger’s Facebook feed.
“I see lots of old men loitering around here,” he said. “I have to stop them from taking photos on their phones. It happens all the time.” Thomas Adamson, Paris, AP