From a small gambling center to a global powerhouse 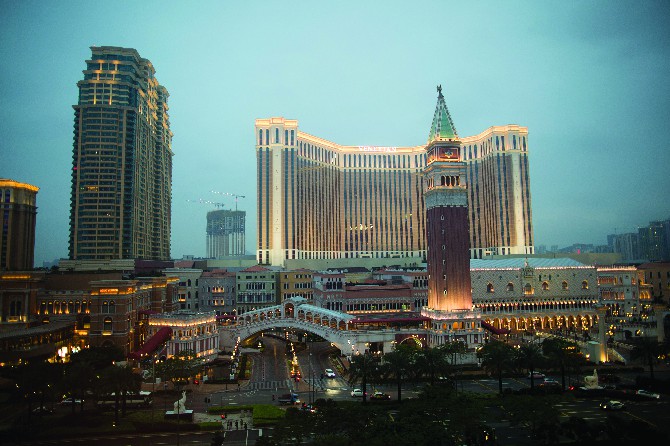 Sheldon Adelson played a significant part in transforming the Macau SAR into a global powerhouse, building numerous landmarks that attracted millions of visitors – with his company’s properties, especially The Venetian Macao, becoming one of the go-to places for tourists.
The Cotai Strip was once a dream of the late casino mogul, who coined the term with regard to constructing a strip of integrated resorts in the city’s former idle island.
The dream was to build casinos and hotels adjacent to each other so that the area would then resemble the Las Vegas Strip.
The billionaire mogul and power broker who built a casino empire spanning from Las Vegas to China first visited the proposed site in Cotai in 2002 when it was still submerged under meters of water.
When faced with water and marsh land, Adelson directed his company to build land where there wasn’t any, piling sand up to create the Cotai Peninsula. Soon his Macau revenue outstripped that of his Las Vegas holdings.
With his unconventional aim, The Venetian Macao became the first proof that the vision could be realised – opening its doors to the public on August 28, 2007.
Cotai was intended to broaden Macau’s revenue base. Industry and city officials envisioned a series of casinos mixed with other attractions that lured more families and convention goers to the city.
The casino mogul’s USD3 billion investment resulted in a paradigm shift, creating the first truly integrated resort that Asia had ever known, combining accommodation, retail, dining, meeting and convention, and entertainment options on a previously unheard-of scale.
His brave investments in the Macau SAR has made his wealth grow exponentially.
Ben Lee, managing partner of IGamiX Management & Consulting, remarked, “Sheldon Adelson has helped transform Macau from a small gambling center into a regional and global powerhouse.”
Not only was the local government surprised of how massive the tourist flow The Venetian Macao generated, but may have also surpassed the expectations of the central government.
“When he built the mass attractions of Sands Macao followed by The Venetian Macao, the outcome probably caught the local government as well as Beijing by surprise in terms of the huge volume of mass traffic they generated,” he added.
Other experts in the gaming industry has described Adelson has a “visionary, a groundbreaking pioneer and fearless entrepreneur” who invented, developed and set the benchmark against which all would be measured in the Integrated Resort Industry
Gaming consultant Niall Murray recalled that the billionaire’s commitment to excellence, unmatched guest service and to providing an exceptional work environment, formed the basis for “the extraordinary and unprecedented success of Sands Las Vegas, Sands China and Marina Bay Sands.”
“Sheldon fearlessly, passionately and consistently led his team to reach for the stars, by setting bold audacious goals and bravely breaking through all barriers to progress along the way. Sheldon was the key driving force in building Sands,” said the chairman of the gaming consultant firm, Murray International Group.
Adelson’s successes with Sands Macao in 2004 and The Venetian Macao in 2007 paved the way for Cotai’s other integrated resort developments which were Four Seasons and The Plaza Macao, and was followed by Sands Cotai Central and The Parisian Macao.
Currently, Sands China Ltd. employs around 28,000 team members.
Meanwhile, Adelson and his wife, Dr. Miriam Adelson, are noted philanthropists who donate to a variety of civic and charitable causes.
The casino mogul passed away in the United States on the evening of January 11 at the age of 87 from complications related to treatment for non-Hodgkin’s Lymphoma.
The Macau SAR government last night issued a statement, extending its condolences to his family. “The leadership of the late Mr Adelson has promoted the development of Sands China in Macao. The Macau SAR Government expresses its deepest sorrow on the passing of Mr Adelson, and extends its most sincere condolences to his family,” the statement reads.

Israeli Prime Minister Benjamin Netanyahu says U.S. casino magnate Sheldon Adelson “will forever be remembered” for his work strengthening ties between the U.S. and Israel.
In a statement yesterday, Netanyahu called Adelson “one of history’s greatest donors to the Jewish people.”
“Sheldon’s great actions to strengthen Israel’s position in the U.S. and to strengthen ties between Israel and the diaspora will be remembered for generations,” Netanyahu said in a statement, adding he had received news of Adelson’s death with “deep sorrow and heartbreak.”
Adelson was a staunch supporter of Netanyahu and a driving force in pushing President Donald Trump’s strong pro-Israel agenda, including the controversial move of the American Embassy from Tel Aviv to contested Jerusalem.