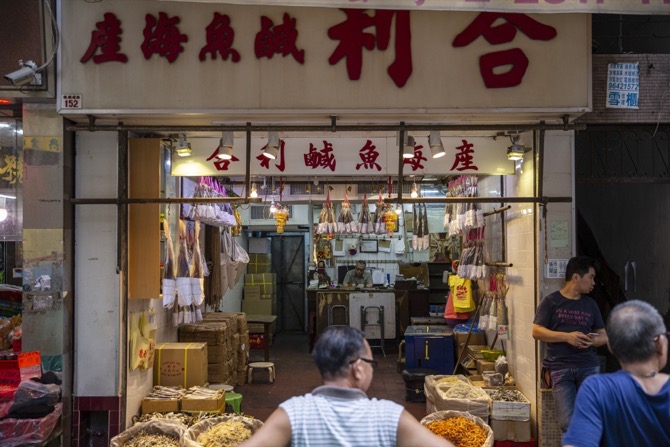 Whether it’s glitzy shops in Central or decades-old family businesses along the city’s winding streets, retailers of all levels across Hong Kong these days find themselves struggling in much the same way.

In the western district of Hong Kong Island, Au Chun Pang, 56, says monthly sales at his dried seafood store have plunged some 20% from the start of the year as economic growth in both China and Hong Kong have slowed and tourism has declined as a result of the frequent protests.

“This was my father’s business,” he said, speaking among rows of salted fish hanging from the ceiling and walls and baskets of dried shrimp. “I’ve been running it for almost 30 years. I don’t know what will happen now.”

Au’s store is located just a few blocks away from China’s liaison office in the neighborhood of Sai Ying Pun, where some of the most violent confrontations between anti-government protesters and riot police since demonstrations erupted three months ago occurred. Other than a clash last month that disrupted operations, Au has been able to keep his shop open so far, but business has suffered.

Prospects are unlikely to improve any time soon with Hong Kong’s economy slowing sharply under the punishing headwinds of a prolonged U.S.-China trade war and the protests that have stretched on since June. There are no visible signs of a resolution coming on either front.

Hong Kong’s retail sales by volume fell 13% in July, in the first full month affected by the protests, according to a government release. Retail sales by value dropped 11.4% to a provisionally estimated HKD34.4 billion. Economists surveyed by Bloomberg had forecast a 12.5% contraction from a year earlier for both retail values and volumes.

“Retail sales will likely stay weak in the near term, as escalated U.S.-mainland trade tensions and subdued economic conditions continue to dampen consumer sentiment,” a government spokesman said in the release. “The situation may even deteriorate further if the social incidents involving violence do not come to a stop.”

Everywhere you look, there are signs of weakness. The city’s economy contracted by 0.4% in the second quarter, more than originally estimated, raising the prospect of a technical recession. Exports fell for a ninth straight month in July, while the long-steady jobless rate ticked higher for the first time in two years in the same month. Sentiment among small businesses, especially retailers, has hit record lows.

“Even on visual inspection you can see the retailers and even restaurants have already been affected in terms of revenue,” said Raymond Yeung, chief Greater China economist at Australia & New Zealand Banking Group Ltd. “As long as we see that this trade war continues to escalate and intensify without any sign of slowing down then we expect the second half of the year the economy will continue to slow down.”

Hong Kong Chief Executive Carrie Lam has described the economic impact of the protests as worse than the SARS epidemic and the 2008 global financial crisis. Financial Secretary Paul Chan introduced a stimulus package worth about $2 billion in August targeting small businesses and households, but economists were skeptical of its impact. Chan is sitting on fiscal reserves of about HKD1.17 trillion, after recording a budget surplus this year.

At Sunglass Hut in IFC Mall, a luxury shopping center in the Central business district, a saleswoman said sales have plummeted as much as 40% since the start of protests. The store sells upscale brands from the likes of Christian Dior SE, Tom Ford, and Gucci.

Business is often suspended early on protest days and staff are suffering from reduced take-home pay, the saleswoman said, declining to give her name.

Most Hong Kong retailers have seen sales drop more than 50% in August, according to the city’s Retail Management Association. The association has urged landlords in the city to halve rents for six months.

Some locations are seeking strategies to help. A spokesperson for Pacific Place, the upscale mall owned by Swire Properties Ltd that’s seen significant disruption, said the company is working to find “plausible solutions” to the current downturn.

Until recent months, Hong Kong had been enjoying record tourist arrivals, including as many as 5 million from mainland China per month. That tally is likely to drop by as much as 50% in August compared to the same period a year ago, according to Yiu Si-wing, a Hong Kong lawmaker representing the tourism industry.

“The situation has not reached the bottom yet,” Yiu said. “In the summer, we were sitting on orders made before the protests escalated. It will become even worse in the first half of September.”

Over on the Kowloon side of Hong Kong in Kwun Tong, dried-fruit seller Abey Cheng, 46, has taken up pushing a snack trolley around demonstrations to hand out treats to protesters. She says it’s an effort to provide a little bit of encouragement, both for herself and others. Sales at her shop plunged 50% from a year ago in July, and she’s earning just enough to cover the rent and her part-time employees’ salaries.