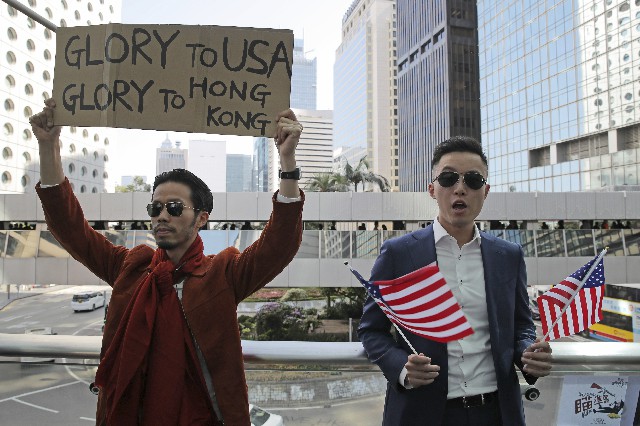 Protesters hold American flags and a placard during a demonstration in Central, the financial district of Hong Kong

China reacted furiously yesterday to President Donald Trump’s signing of bills on Hong Kong human rights, summoning the U.S. ambassador to strongly protest and warning the move would undermine cooperation with Washington.
Trump’s approval of the bill was not unexpected. Neither was the reaction from Beijing, given China’s adamant rejections of any commentary on what it considers an internal issue. But the clash comes at a sensitive time and could upset already thorny trade negotiations.
Chinese Vice Foreign Minister Le Yucheng told Ambassador Terry Branstad that the move constituted “serious interference in China’s internal affairs and a serious violation of international law,” a foreign ministry statement said.
Le called it a “nakedly hegemonic act.” He urged the U.S. not to implement the bills to prevent greater damage to U.S.-China relations, the ministry said.
At a daily news briefing, ministry spokesman Geng Shuang responded to a question about how Trump’s endorsement of the legislation might affect relations by saying it would undermine “cooperation in important areas.”
The U.S. laws, which passed both houses of Congress almost unanimously, mandate sanctions on Chinese and Hong Kong officials who carry out human rights abuses in Hong Kong; require an annual review of Hong Kong’s favorable trade status and prohibit the export to Hong Kong police of certain nonlethal munitions.
China has repeatedly accused the U.S. and other Western countries of orchestrating the mass demonstrations.
A ministry statement earlier yesterday repeated heated condemnations of the laws and said China would take unspecified “countermeasures.” It said all people of Hong Kong and China oppose Washington’s move.
It’s unclear how China will respond exactly, and whether Trump’s decision might disrupt negotiations with Beijing aimed at easing trade tensions.
Asked yesterday if the U.S. legislation would affect trade talks with Washington, a Chinese Commerce Ministry spokesman said he had no new information to share.
Trump earlier expressed concern about whether the legislation might complicate efforts to work out a trade deal with Chinese President Xi Jinping.
Recently both sides expressed confidence they were making headway on a preliminary agreement to avert a further escalation in a tariff war that has hammered manufacturers in both nations.
“I signed these bills out of respect for President Xi, China, and the people of Hong Kong,” Trump said in a statement. “They are being enacted in the hope that Leaders and Representatives of China and Hong Kong will be able to amicably settle their differences leading to long term peace and prosperity for all.” MDT/AP

Chanting “Stand with Hong Kong,” pro-democracy activists yesterday urged the world to follow U.S. footsteps by passing laws backing human rights in the semi-autonomous Chinese territory. Prominent activist Joshua Wong, who was among democracy supporters who lobbied for the new U.S. laws, called them a “remarkable achievement,” with human rights triumphing over crucial U.S.-China trade talks. Wong said he hopes the laws will spur Britain and other Western nations to follow suit. He said he would participate in a parliamentary hearing in Italy via Skype to press for further global support. “Now is the time for the Western world to stand with Hong Kong,” he said.