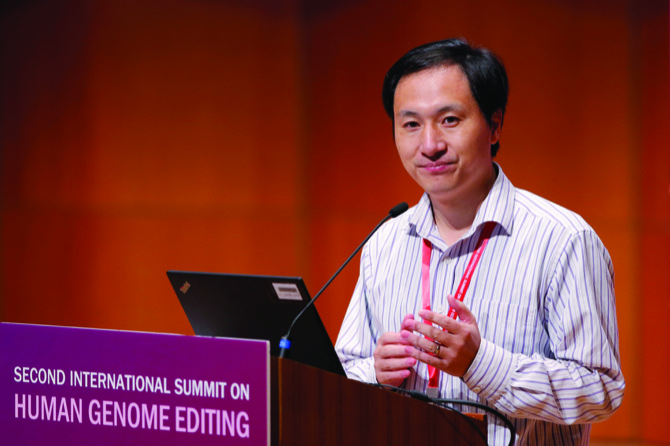 The Chinese researcher who claims to have created the world’s first genetically-altered babies revealed a possible second pregnancy had resulted from his project, highlighting the dilemmas facing China’s leaders as they attempt to control a nascent industry racing to dominate genomics research globally.

He Jiankui – the Shenzhen-based scientist who shocked the world this week by claiming he had altered the genes of the embryos to make them resistant to HIV – said the study is on hold. The U.S.-trained researcher spoke for the first time at a genetics conference in Hong Kong, where he sought to defend his work and faced probing questions from peers.

“I feel proud,” he said of the birth of the twins, who he said were born normal and healthy. He’s claims are yet to be verified and he didn’t identify the subjects of his experiment. His appearance at the summit left participants, which included prominent gene-editing researchers, with more questions than answers. He spoke softly and haltingly, and it wasn’t clear if the other “potential pregnancy” that he referred to was still viable.

The scientist’s appearance in Hong Kong failed to quell condemnation from the Chinese and global scientific communities, who have lashed out at him for doing work that’s banned in the U.S. and many other countries. His revelations have sparked a robust debate over the ethical boundaries of genetic editing and prompted calls for stricter regulation amid fears that the world could be moving closer to producing designer babies.

“This is a truly unacceptable development,” said Jennifer Doudna, a key pioneer behind gene-editing technology. “I don’t think it is credible that it is for a medical need. We are struggling to understand the implication of this work.”

Yesterday, He said he has submitted his work to a scientific journal for review, without identifying the publication. He also emphasized that he informed the couples involved in the study of the risks of the removal of the CCR5-related gene, which he deleted in the twins using the powerful gene-editing tool Crispr.

There are questions of whether He took an unnecessary risk in altering healthy embryos.

He’s work now faces three investigations in China and calls from prominent Chinese researchers for him to be punished. A senior Chinese government official has said his work is unlawful.

Several times during the session, He seemed puzzled by the deep ethical questions posed to him. When asked if he had thought about how the procedure would affect the girls in their dynamics with family, friends and romantic partners throughout their lives, he said: “I don’t know how to answer this question.” He added that using technology to help people with genetic diseases is “compassion.”

William Hurlbut, a senior researcher in neurobiology at the Stanford Medical School, said that he was one of the ethicists that He consulted with over the past two years. Hurlbut, who served on the U.S. president’s council on bioethics, said that while he knew that He was “heading in this direction,” he didn’t know the full-scale of the project or that it involved implanted embryos. “I challenged him at every level, and I don’t approve of what he did,” said Hurlbut.

Nobel Prize laureate David Baltimore, who also attended the genetics conference, criticized the secrecy of He’s work. “Had he been more open with what he was doing, it could have been part of a national or international discussion,” he said. “I think he acted irresponsibly.”

The institutions affiliated with He, including his university – the Southern University of Science and Technology – and the Shenzhen hospital where he purportedly received ethical approval for the project, have said that they had no knowledge of his work. He said the university was unaware of the lab’s work.

Harmonicare Medical Holdings Ltd., which owns the Shenzhen hospital, said in a filing Tuesday that it believed signatures on an application to the hospital’s medical ethics committee had been forged, and that the committee never met to review He’s proposal.

The Chinese scientific community, including several prominent research groups, have issued statements opposing He’s work and calling it a blow to China’s scientific reputation around the world.

On Tuesday, in the clearest sign yet that the Chinese government viewed He’s project as violating rules, Deputy Minister of Science and Technology Xu Nanping said in a press briefing that China had outlawed the use of gene-editing for fertility purposes in 2003.

Chinese law does not mention the use of Crispr, the revolutionary gene-editing technique that He used to alter the twins’ genetic code. By contrast, the U.S. and many other countries have strictly restricted Crispr’s use in so-called germ-line editing, which involves changes that will impact the descendants of an original patient and is the kind He claims to have performed in China.

The most recent Chinese government pronouncement, a 2017 document from the science and technology ministry, said only that gene-editing research involves great risks and urged rigorous supervision.

In his Tuesday briefing, deputy minister Xu hinted at the internal debates the Chinese government has over how it should regulate burgeoning research areas like biotechnology and artificial intelligence. China wants to be a leader in the defining technologies of the 21st century, but lax regulation risks cases like He’s.

“We are conscious that it’s a double-edged sword. Sometime we feel quite anxious,” said Xu. “To be honest, on this question, we still haven’t completely straightened out our thinking. We know there will be some negatives but we also don’t dare – because there will be negatives – to avoid technologies or advancements.”’ Bloomberg