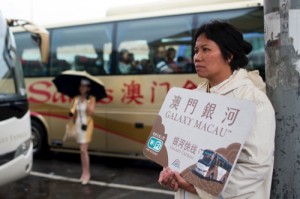 An employee holds a sign for the Galaxy Macau casino resort

Galaxy Entertainment Group Ltd., the Macau casino operator that made Lui Che Woo a billionaire, will increase its workforce by 50 percent to staff a new casino after posting earnings that beat analyst estimates.
The Hong Kong-listed company will begin recruiting 8,000 workers at the end of this year for the second phase of its Galaxy Macau resort on the city’s Cotai Strip, deputy chairman Francis Lui, 58, said at a news conference yesterday. The property, which will cost HK$20 billion to build, is on schedule for completion by the middle of next year, the company said.
Earlier yesterday, Galaxy reported that adjusted earnings before interest, taxes, depreciation and amortization for the three months ended June rose 15 percent to HKD3.5 billion (USD452 million) from a year earlier as “mass-market” gamblers offset a slowdown in high rollers’ wagers. That compared with the HK$3.4 billion average of 16 analyst estimates compiled by Bloomberg.
Galaxy joins SJM Holdings Ltd. as the only Macau casino operators to exceed analyst expectations for quarterly earnings as the high-stakes gamblers who account for 60 percent of the city’s revenue spend less. The company, which currently has 16,000 employees, faces competition for workers from operators including Melco Crown Entertainment Ltd. to fill positions as they expand resorts to draw more bettors to the world’s largest gaming hub.
The company will consider distributing shares to employees to retain talent, chairman Lui Che Woo, 84, said yesterday. Rising labor costs are expected to trim the company’s profit margin by 1 to 1.5 percent, according to the younger Lui, the chairman’s son. Galaxy will also begin hiring for the Grand Waldo casino complex which it bought last year for HK$3.25 billion and is renovating, he said, without specifying how many workers.
Melco, which also plans to hire 8,000 employees for a new casino resort in Macau next year, is offering employees higher wages and management training. MGM China Holdings Ltd., Sands China Ltd. and Wynn Macau Ltd. are also expanding their resorts in the former Portuguese enclave.
Galaxy rose 3.4 percent to HK$61.90, the biggest gain since July 2, reducing this year’s losses to 11 percent. That compares with the benchmark Hang Seng Index’s 7 percent gain.
Galaxy, Melco Crown and Sands China are shifting resources to lure more vacationing Chinese and other mass-market gamblers and offset a drop in revenue by high-rolling VIPs. They’ve added malls, theaters and restaurants to their resorts in the Cotai area.
Macau’s gaming industry has been hit by president Xi Jinping’s nationwide crackdown on corruption, as well as a slowdown in the Chinese economy, which analysts forecast to grow at its slowest pace since 1990. Casino revenue in Macau fell 3.6 percent to 28 billion patacas ($3.5 billion) last month after the first decline in five years in June.
“The group remains very optimistic about Macau’s prospects,” the company said yesterday. “The evolution of the market to mass gaming is likely to continue, supported by longer-term drivers, such as improved transportation infrastructure and a rapidly growing Chinese middle class looking to broaden its horizons through increased travel.”
Galaxy has approval to build as much as 2 million square meters of gross floor area on the Cotai Strip, the most among the city’s six licensed casino operators. Arrivals from the mainland rose 15 percent year on year in the first half of 2014.
Francis Lui, the deputy chairman, said he expects Macau casino revenue to stabilize this month and grow by “double digits” this year. The elder Lui and his family own about 51 percent of Galaxy. He has an estimated net worth of $18.5 billion, according to the Bloomberg Billionaires Index. Bloomberg