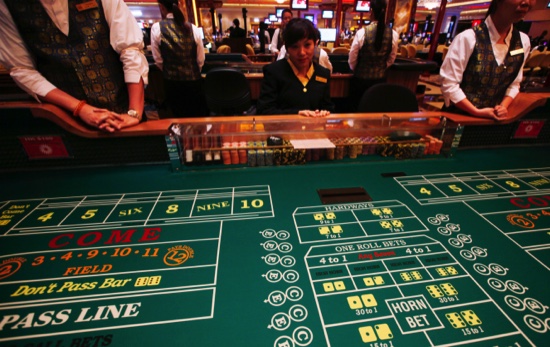 Macau casino shares plunged in Hong Kong trading on weak gambling over the Lunar New Year holiday period fueling expectations that revenue from Chinese high-rollers will continue to slump in the coming months.
Wells Fargo & Co. said its checks suggested weak revenue trends in both VIP and mass segments, with a number of mass tables empty on the third and fourth days of Lunar New Year, analyst Cameron McKnight wrote in a note. Macau gross gaming revenue may fall 53.5 percent this month, according to the median estimate of eight analysts surveyed by Bloomberg, worse than the 40 percent drop forecast before the holiday began.
China’s Lunar New Year, which started on Feb. 19 this year, is traditionally a period for Chinese to travel and a peak gambling season in Macau. Last February was a record high for the local casinos, which have since been hit by Chinese government crackdowns on graft and stricter travel rules, deterring high rollers from entering the territory.
“We’re still cautious on gaming stocks,” Daphne Roth, head of Asian equity research at ABN Amro Private Banking which manages about USD218 billion, said over the telephone. “The Chinese government is determined to pursue its anti-corruption drive and that’s negative on the casino stocks.”
Macau’s casino revenue had slumped an eighth straight month in January for the industry’s longest losing streak since monthly records started in 2005. The 53.5 percent year-on-year slump predicted for February would be the all-time worst.
“We believe the situation is likely to deteriorate in the coming months,” Credit Suisse analyst Kenneth Fong wrote in a note yesterday. “On the VIP side, with more junkets shutting down business post Chinese New Year and working capital in the system shrinking, revenue may see another leg down.”
MGM China Holdings Ltd. fell 7.2 percent to HKD17.68 at the close of trading in Hong Kong, the biggest decline since May 8 2014. Sands China Ltd. dropped 5.8 percent and Galaxy Entertainment Group Ltd. fell 5.1 percent, the worse performers on the benchmark Hang Seng Index, which gained 0.1 percent.
Wynn Macau Ltd. and Melco Crown Entertainment both lost 5.9 percent, and SJM Holdings Ltd. declined 5.1 percent. The shares extended their declines from yesterday after the Secretary for Social Affairs and Culture Alexis Tam said the city wants to study restrictions on mainland Chinese tourists to ease overcrowding. Daryl Loo and Jonathan Burgos, Bloomberg/MDT

The portion of SJM’s profit attributable to owners of the company declined by 12.7 percent year-on-year in 2014 to HKD6,731 million, the operator revealed in a press release yesterday. Despite leading in market shares (with an overall gaming market share of 23.2 percent), SJM’s gaming revenue dropped by 8.8 percent year-on-year in 2014, amounting to HKD79,269 million.
SJM Holdings Limited said that the adjusted EBITDA of the group decreased by 10.5 percent to HKD7,763 million.
The company yesterday announced the audited results for last year. Figures show that hotel, catering and other income decreased by 22.4 percent to HKD971 million, “reflecting the impact of a one-off gain of HKD149 million from the group’s investment in Macau Legend Development Limited in 2013 and a decrease in fair value of financial assets of HKD140 million in the current year.”
SJM Holdings Limited said that the group maintained its strong balance sheet, with cash and bank balances totaling HKD24,418 million by December 31 last year.
SJM Holdings’ CEO, Ambrose So, acknowledged that, “2014 proved to be a challenging time for Macau’s gaming industry, particularly the second half.” “Nevertheless, the efforts of our team and the appeal of our products enabled SJM to maintain the number one position in our industry as well as to make significant progress in construction of the Lisboa Palace on Cotai,” he said in a statement.