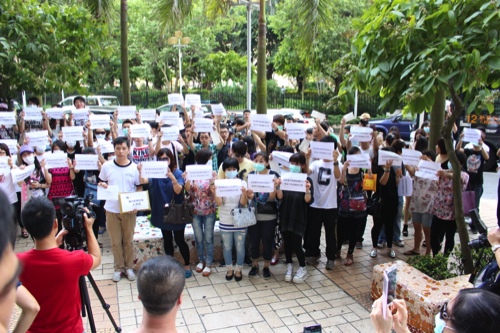 The Forefront of Macau Gaming (FMG) has said that further protests targeting other gaming operators will be held depending on whether staff want similar campaigns to take place. FMG president Ieong Man Teng denied that they have been targeting foreign operators.
He told the Times that to date they had only targeted Sands China and Galaxy Entertainment Group as staff from both companies had voiced their concerns to the union. “Staff at Sands and Galaxy are angry with their employers as they believe they are not receiveing the welfare [benefits] they deserve. So these employees came to FMG and asked for our help,” he said.
Ieong Man Teng assured that they “didn’t mean to target foreign operators.”
Asked if they will be targeting Sociedade de Jogos de Macau (SJM), as recent media reports have implied, the FMG president said “it depends on whether the staff want similar campaigns to be held, like the ones addressing Galaxy and Sands China.”
A first round of signatures targeting unsatisfied employees from SJM took place last Saturday. The union was able to gather over 2,000 signatures from workers who are not  satisfied with welfare benefits and salaries. A second round of a signature collecting campaign was held yesterday, addressing casino employees from all six gaming operators (see box).
Ieong Man Teng told the Times that they will be meeting with SJM staff to assess their needs. A possible protest will be held depending on the employer’s response to their demands.
Ben Lee, managing partner at IGamiX Management & Consulting Ltd, told the Times that although he does not see a particular reason why Sands and Galaxy have been targeted, but the fact that they are high profile companies might have contributed.
“I think they might be some of the highest profile companies and if you want to generate publicity, you chose high profile targets,” he said.
The gaming expert sympathizes with workers’ demands, as their salaries initially increased quite quickly, but in the last five to six years, wage increases have slowed, apart from nominal increases.
While Macau rushes to build eight more resorts, labor strains are due to intensify as casino workers demand higher salaries and threaten to strike, Reuters reported recently.
Las Vegas Sands and Wynn Resorts together reported labor compensation costs of USD50 million in their Macau casinos last quarter.
A recent Morgan Stanley report concluded that “the bargaining power of casino employees will keep rising in the coming few years amid labor shortages and demand for labor for Cotai phase 2 over 2015-17.”
Ben Lee also believes that casino labor costs will rise in the coming years. Protests are not likely to disappear either. “Protests are likely to continue, [workers] appear to have the upper hand. There’s a shortage of labor here, and it’s also in the government’s interest to make sure local people are happy. With that kind of leverage, I do expect workers to try to get a bigger slice of the pie for themselves,” he stated.
Casino dealers have not only demanded higher salaries and improved welfare benefits, but they have also been voicing their concerns over imported labor.
The government has stated on several occasions that the policy allowing only Macau residents to take up positions as casino dealers is unlikely to change in the near future.
But with the next wave of Cotai resorts set to increase labor force demand, casino dealers’ concerns remain.
Ben Lee believes that it will be possible to limit hiring to the local population if the government maintains the annual three percent growth cap on table games. “The problem arises when a lot of the casinos tell gamblers they will be applying for between 500 to 700 (…) If each and every casino gets these tables, there’s no way local labor is sufficient,” he said.
Casino dealers have protested over the last few weeks demanding salary increases from Sands China and Galaxy Entertainment Group, holding a total of three demonstrations.
Both operators have announced plans to improve benefit schemes.

Casino workers from all six gaming operators in Macau united to sign a joint petition yesterday, demanding better salaries and welfare benefits.
They signed their names and also recorded their staff numbers. The event started at noon yesterday and ended at 7 p.m. in the northern district. The first round of signature collections was held last Saturday.
The organizer, Forefront of Macau Gaming, claimed that they had collected 7,500 signatures in total during the two-days’ campaign.
Ieong Man Teng, the association’s president, told the Times yesterday that they might need to hold a third round: “Many casino workers couldn’t come today (yesterday), but they want to join.”
The group plans to organize casino staff from six gaming operators and launch a demonstration during the CE election.