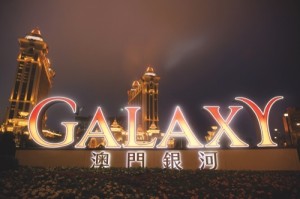 Galaxy Entertainment Group Ltd., controlled by billionaire Lui Che Woo, climbed to the highest level in a week after posting third-quarter revenue that showed resilience in its high-stakes gambling business.
Galaxy rose 2.5 percent to close at HKD52.35 in Hong Kong, a price it last reached Nov. 4. The benchmark Hang Seng Index gained 0.3 percent.
Adjusted earnings before interest, taxes, depreciation and amortization rose 1 percent to HK$3.3 billion (USD426 million), Hong Kong-based Galaxy said in a stock exchange statement yesterday. That compares with the HK$3.32 billion average of six analyst estimates compiled by Bloomberg.
Galaxy drew more players from both the high-end and the mass-market segments of the industry even as its competitors such as SJM Holdings Ltd. and Wynn Macau Ltd. saw VIP traffic drop off. Macau casino revenue fell for the fifth-straight month in October amid an overall economic slowdown and President Xi Jinping’s crackdown on corruption.
“What stood out is that their VIP business tends to be outperforming the market,” said Michael Ting, a Hong Kong-based analyst at CIMB Securities Ltd. “Galaxy’s relationships with the junkets are quite strong.”
Galaxy revenue climbed 6 percent to HK$17.3 billion in the third quarter, with sales from the mass market increasing 12 percent year on year and that of high-stakes gamblers climbing 5 percent.
At Galaxy Macau, its main casino in the city, gambling revenue in both ends of the market rose 12 percent year on year. Sales from high rollers fell 13 percent from the previous quarter with mass-market sales up 2 percent.
The company’s stock has fallen 25 percent this year, compared with a 2.2 percent gain for the city’s Hang Seng Index.
Casino revenue in Macau dropped 23 percent to 28 billion patacas ($3.5 billion) in October, Macau’s Gaming Inspection and Coordination Bureau said this month. That was the biggest decline since the city started collecting monthly records in 2005.
Casino revenue growth among mass-market gamblers could drop to zero or worse from now until March 2015, Praveen K. Choudhary, an analyst at Morgan Stanley, wrote in a report this
“2014 is probably not going to be a good year for gaming, but stocks tend to re-rate when new capacity opens, and Galaxy will be the first one to open with Galaxy phase 2 in 2015,” Ting from CIMB said. Galaxy is his top pick for the industry for 2015, he said.
Galaxy plans to add as many as 500 gambling tables and 1,300 hotel rooms in the second phase of its Galaxy Macau resort. The expansion, which will cost about HK$20 billion to build, is on schedule for completion by the middle of next year, the casino operator said yesterday.
Galaxy has approval to build as much as 2 million square meters (21.5 million square feet) of gross floor area on Macau’s Cotai Strip, the most among the city’s six licensed casino operators. It plans to quadruple the size of the Galaxy Macau by 2018.
Lui has an estimated net worth of $14.8 billion, according to the Bloomberg Billionaires Index. Bloomberg