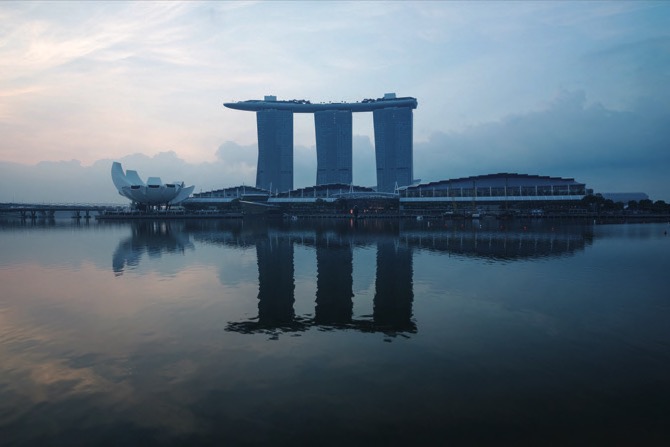 The moves come with Singapore attracting record tourist numbers even as its pace of hotel expansion slows. In part boosted by the hit movie “Crazy Rich Asians” and the hosting of a summit between U.S. President Donald Trump and North Korean leader Kim Jong Un, visitor arrivals in the city-state last year jumped 6.2 percent to 18.5 million, data from the Singapore Tourism Board show. Receipts increased 1 percent to SGD27.1 billion.

Las Vegas Sands’ Singapore venture will build a fourth tower to its Marina Bay Sands resort and construct a new entertainment arena, while Genting’s Resorts World Sentosa will build two new theme zones and enlarge its aquarium, according to a statement from the Ministry of Trade and Industry and other government agencies. The additional investments by both are almost two-thirds of their initial investment in 2006 of about SGD15 billion, the ministry said.

Genting Singapore said in a separate statement it will commit to spend SGD4.5 billion to expand Resorts World Sentosa over five years.

The company’s shares fell as much as 9 percent, the most since August, in Singapore trading yesterday. Genting was downgraded by analysts including JPMorgan Chase & Co.’s DS Kim, who said the expansion plans come with “a hefty price tag” and any meaningful earnings boost is “probably too far off even for long-term investors.”

Singapore also said it plans to increase tax rates on gross gaming revenue at the end of the current moratorium in February 2022 by introducing a tiered casino tax structure. The city-state will also boost casino entry prices for Singapore citizens and permanent residents to SGD150 a visit from SGD100.

Las Vegas Sands recently settled a dispute elsewhere in Asia, reaching a confidential pact with a Hong Kong businessman who claimed he was entitled to as much as $328 million for helping the casino operator secure a license in Macau.

The company is contending with health woes for billionaire founder Sheldon Adelson, whose work schedule has been curtailed by cancer treatments. Bloomberg

Not all negative on higher taxes

Not everybody is negative on the higher taxes and expansion plan. Citigroup Inc. maintained its buy rating on the stock and raised the price target to SGD1.28 from SGD1.20. The higher gaming tax is “a very small price to pay for the opportunity to grow again in Singapore,” Citigroup’s analysts led by George Choi wrote in a note.

Bernstein analyst Vitaly Umansky said the expansion plan should be viewed as a long- term positive, outweighing the tax increases. Genting plans to utilize existing its cash balance, cash flows and project financing for its expansion, Umansky wrote in a note.

“There should be no impact to dividends,” and Genting will continue to pursue a Japan integrated resort opportunity, Umansky said.