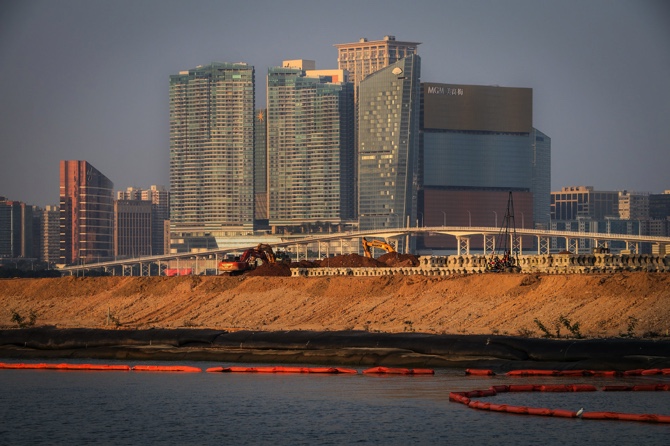 Similar to many members of the public, most lawmakers were concerned with the termination of “satellite casinos” in the first reading of the Gambling Law amendment.

A parliamentary plenary was held yesterday to discuss the overall direction of the legislation, with Secretary for Economy and Finance, Lei Wai Nong, sitting in to answer lawmakers’ questions about the legislation.

“Satellite casinos” refer to casinos not located in premises owned by the gambling concessionaire operating the casinos. There are 20 of them currently.

Prior to answering lawmakers’ questions, the senior official stressed that the term “satellite casino” is not a legal term and there is no legal definition whatsoever.

About a dozen lawmakers expressed their views, made comments and raised questions.

Leong Sun Iok and Ella Lei, both from the labor association, were concerned with the possible impact on the labor market with the anticipated closure of satellite casinos.

Lawmaker Lei Leong Wong warned the government that they should prepare for the worst, because this matter concerns a workforce of at least 7,000 people. “Counting supporting staff in, the figure may reach 15,000,” the lawmaker pointed out, hinting that the government must handle the problem with extreme care.

Lawmaker Pereira Coutinho questioned about the possibility of outstanding debts under the names of these “satellite casinos.”

Other lawmakers, such as casino executive Angela Leong, demanded to know if the government had evaluated the possible impact on business circles near satellite casinos.

They pointed out that satellite casinos have generated business environments in their neighborhood, supporting the existence of late-night restaurants and shopping, among other elements.

Some even referred to the “historic values” of satellite casinos, saying that they made massive contributions to the city before the gambling market opened and the city become well-known to the world.

“These satellite casinos have supported Macau’s expenditure on education, healthcare and infrastructure,” several lawmakers pointed out. “They have paid for our ferry terminals and airport.”

In response to these questions, Lei did not answer directly whether the government had conducted any such evaluation. This is a contrast to the capping of the number of licenses at six, which he said was the result of “comprehensive evaluation and public opinion.”

He referred to the proposal in the bill and said that the proposal that states casinos must be located in properties owned by concessionaires.

“As casinos are legally government premises, they need to be located in properties owned by concessionaires so that they can be retrieved by the government when needed,” Lei said.

He assured lawmakers that with the three-year buffer period proposed in the bill, current owners of “satellite casinos” will have time to make necessary arrangements.

Lei reiterated at yesterdays’ parliamentary session that the government is not attempting to kill all satellite casinos.

Lawmaker Ron Lam slammed the government for not having a vision in the proposed bill over the gambling industry of the city, especially as it is the core trade in the MSAR.

Furthermore, he pointed out that more clarifications are needed. “There is an industrial chain,” he said. “We need to clarify many concepts now.”

Moreover, he foresees that certain crucial information will be obstructed from the general public’s knowledge because the bill proposes that bidding documents be confidential.

Lei, in response, said that the bill states certain documents must be kept in confidentiality and the public will not be able to see them. The government has to abide with that, Lei said.

His reply prompted Coutinho’s follow-up reminder about the fact that the bill is not yet a law: “I must remind everybody in the room that this is only a bill, which is under legislation process, waiting for the assembly to pass it.”

Several lawmakers applauded the government’s proposal on stipulated corporate social responsibilities. However, without elaborated clauses, they pointed out that grey areas can still be possible.

Lei replied that at legislation stage, the concept “has to be abstract.” However, more elaborated stipulations will be made during the bidding stage. He also offered opportunities for bidders to make proposals on their corporate social responsibility vision, so that the government will have the chance to choose a better plan.