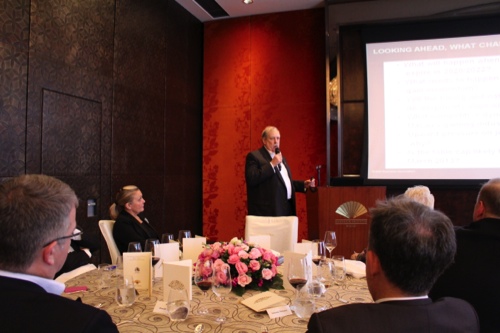 As the Macau government prepares to commence talks on gaming concession renewal next year,  David Green, gaming regulation expert and founder of Newpage Consulting, believes that further liberalization is unlikely to occur. Speaking at a luncheon hosted yesterday by the British Business Association of Macao (BBAM), David Green stated that Macau is likely to remain with six concessionaires, but legislation might be amended to ensure that sub-concessions will be treated as concessionaires.
Although there are six well known gaming operators in Asia’s gambling hub, Macau’s government only awarded three gaming concessions back in 2001 to Sociedade de Jogos de Macau (SJM), Galaxy Entertainment Group and Wynn Resorts. Soon after, these have established sub-concession contracts with MGM Resorts, Venetian Macau S.A., and Melco Crown.
As these gaming licenses are due to expire between 2020 and 2022, the Macau government is likely to commence discussions on their renewal next year. The Chief Executive has also promised to launch a public consultation on the matter.
In the meantime, issues such as the terms on which concessions will be extended, the renewal of all six, or the entering of the market by new bidders  remain to be addressed.
David Green believes there won’t be additional bidders allowed. He is also convinced that current operators will get their concession contracts renewed.
“I think the six will remain. The law might be amended to ensure that the concessions are in fact all concessions,” he said.
The gaming expert does not see compelling reasons for changes to be introduced on the existing six concessions, as all operators are “building their plans and infrastructure in the assumption that they will in fact be operating beyond the termination of current concessions.”
Opening the market to new bidders would raise other concerns, he added. “The problem would be floodgates. In my own experience, there are 20 or more groups of people in Macau who would claim a divine right to be granted a concession,” the gaming consultant recalled.
Unveiling his prognosis for the industry, David Green said that there would be decreasing reliance on junkets. He recognized that junket operators are trying to diversify and moving into other areas and geographies, also directly investing in gaming operations, a trend he believes is likely to continue.
The gaming expert also forecasts that the casino table cap will remain at least until 2019 and the special gaming tax rate will hold at 35 percent.
Gross Gaming Revenue (GGR) will continue to grow, “albeit at a reducing rate over the next five years.” However, he thinks that the question of whether further Cotai resorts will cause a step-up “is problematic,” given the lag in critical infrastructure and limited tourism-carrying capacity of Macau.
As the next wave of Cotai resorts takes shape, David Green is convinced that the non-gaming component will most likely expand. “It’s important that they take the opportunity to do that. It’s a strategically defensive move, because it takes the heat off that they feel [while] relying on gaming revenue,” he said, adding that it will also play a role in broadening the appeal of Macau as a “genuine tourist destination.”
Mr Green sees the completion and successful opening of the new casino developments as one of the greatest current challenges. “We’ve got infrastructure completion. It’s obviously critical now to get that finished as soon as possible (…) [as] gaming is not growing as quickly as it was,” he said.
Although there is still a significant correlation between VIP market segment and gross gaming revenue, the gaming expert recalled that “we’re starting to see a slight separation,” but whether it will continue remains uncertain.

Protests were to be expected

Casino staff from various gaming operators have recently taken to the streets seeking higher wages and further labor benefits. Gaming regulation expert David Green believes that recent protests were to be expected. “With any rationed product like labor, particularly for dealer positions in Macau, it’s understandable that they would try to assert themselves to get to the best position possible, before the pressures associated with the opening of new properties” he told reporters yesterday. Convinced that the timing was no surprise, David Green believes that a compromise should be found quickly. “It’s difficult for gaming operators, they are caught between a rock and a hard place here.”

Australian national broadcaster ABC has discovered unlicensed individuals and companies operating in Melco Crown Entertainment’s Macau properties during a six-month investigation. ABC reporters say there were able to uncover a number of individuals and companies, who are not licensed by Macau’s casino regulator, advertising casino services from Melco Crown’s resorts.
The report also revealed that some of these operators have links with organized crime. Melco Crown replied that “it only deals with junket operators licensed by the Macau government.” ABC reported, however, that the discovery of the unlicensed operators was not too difficult, since they advertise in the Macau Yellow Pages and have criminal affiliations.
Melco Crown insisted that it only deals with junkets approved by the Gaming Inspection and Coordination Bureau (DICJ).
A Melco Crown spokesperson explained that “some employees of licensed junket operators have established phone lines as part of their work at the resort casinos.” And the phone numbers listed are sometimes in their own name, instead of that of their employer, which the spokesperson said “is a very common” procedure in Macau’s casinos.
Asked to comment on the ABC allegations, DICJ told the Times that they are not allowed to comment on individual cases. The regulator stressed that licensing procedures for junket promoters have remained the same and should be performed in accordance to current legislation.
“Article 3 of the Administrative Regulation no. 27/2009 has already specified that the junket promoting business in Macau can only be operated by licensed junket promoter who is either working as individual junket or junket company,” the regulator said.
Asked regarding advertising casino services being performed by unlicensed individuals or companies, DICJ stated that questions should be addressed to the “Provisional Municipal Council of Macau (IACM) [sic].” CP