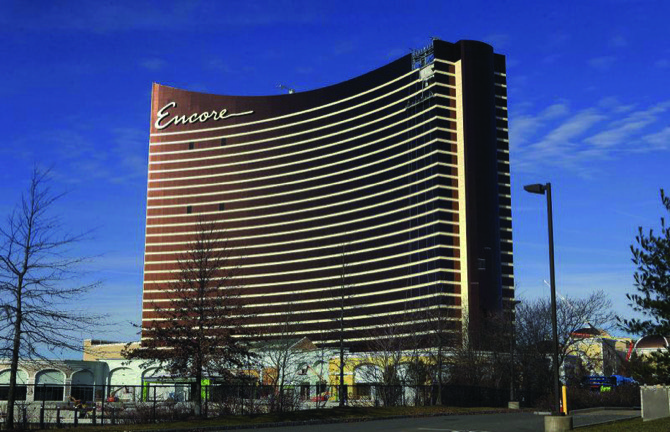 In this Jan. 2, 2019, file photo, construction continues on the Encore Boston Harbor luxury resort and casino in Everett, Mass.

Wynn Resorts Ltd. is in talks with MGM Resorts International to sell its nearly finished casino outside Boston – a startling turn after the company won a battle to keep its casino license in the state.

“Over the past several weeks, we have engaged in conversations around the potential sale of Encore Boston Harbor,” Wynn and MGM said Friday in a joint statement. “They are very preliminary and of the nature that publicly traded corporations like ours often engage in.”

“Our conversations will not impact the jobs at our facilities and will not impact the opening of Encore Boston Harbor,” the companies added. “Regardless of where this leads us, we will ensure that our commitments will be met, and that those who welcomed us into their communities will not be disappointed.”

The acquisition of a marquee property in Boston would bolster MGM’s growing presence on the East Coast. In recent years, the company has expanded with new properties, bought a racetrack casino near New York City and acquired full control of the Borgata in Atlantic City, New Jersey.

MGM operates a casino in Springfield, Massachusetts, about a two-hour drive from Boston. The 2011 state law that authorized up to three resort casinos in Massachusetts prohibits companies from holding more than one casino license, so MGM would not be permitted to operate both the Springfield and Boston Harbor facilities. It would likely have to sell the $960 million Springfield resort that opened only last year.

The law does contemplate the possibility of a license transfer and provides guidance for how one might occur, but such a process would likely be complicated and perhaps lengthy, according to gambling regulators. As host communities for the casinos, Springfield and Everett would also likely have a say in any negotiations surrounding new licensees for the casino.

Wynn recently engaged in merger discussions with Australia’s Crown Resorts Ltd. The company embarked on the Boston property as part of a strategy by its former CEO to bring back grand hotels in major cities. But the Las Vegas-based casino operator has been more focused on international markets such as Macau and Japan, where it’s pursuing a casino license.

Concerns over a U.S.-China trade war have hurt shares of casino companies with big investments in Macau. Wynn shares fell as much 4.5% to $121.61 in New York. MGM, which has two Macau properties, was down as much as 2.4%.

In its investigation, Massachusetts Gaming Commission focused on how long Wynn officials were aware of the allegations against Steve Wynn and how they responded, rather than the truth behind the claims. Steve Wynn, who resigned as CEO last year, has denied the allegations.

The Massachusetts Gaming Commission had no immediate comment on the talks between the two companies. Elaine Driscoll, a spokeswoman for the agency, said in a statement the agency said its written decision following the Wynn investigation stands.

“The deadline for fine payment and notice of appeal is May 31. The MGC continues to focus its efforts on the significant amount of regulatory preparations required before Encore’s opening,” Driscoll said in the emailed statement. MDT/Agencies