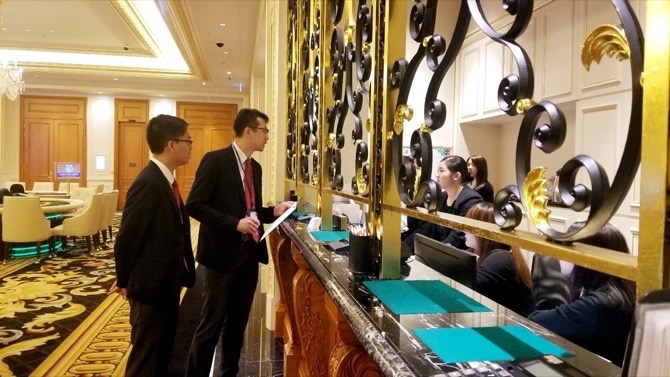 The city’s gaming regulator says it has been carrying out surprise inspections of junket-controlled rooms at Macau casinos in order to crack down on any illegal activity.

In a statement issued Friday, the Gaming Inspection and Coordination Bureau (DICJ) said it had organized several so-called “lightning” inspections at gambling promoters’ sites inside casinos. It said that these inspections serve to ensure the healthy development of the gaming sector, while acting as a deterrent against any illegal activity.

The inspections appear to come in response to allegations made by Chinese mainland media that junket operator Suncity Group was involved in the running of online casinos and proxy betting services based in Southeast Asia. Both activities are forbidden in Macau.

Suncity denied the allegations, but said it would adopt Macau law for the group’s overseas operations in a bid to prevent similar accusations in future.

A meeting between representatives of the DICJ and the Judiciary Police was held on Friday to exchange information on the current situation of illegal gambling activity. In particular, the authorities discussed illegal online gambling and the evolution of gaming-related crime.

The DICJ urged junket promoters to strictly abide by Macau’s laws and regulations, while at the same time recalling that violators of the law may have their suitability to continue operating in the SAR reviewed.

Secretary for Economy and Finance Lionel Leong also issued a reminder last week that Macau’s gaming concessionaires and sub- concessionaires – as well as the city’s licensed junkets – must comply with local laws in order to carry out their businesses. DB