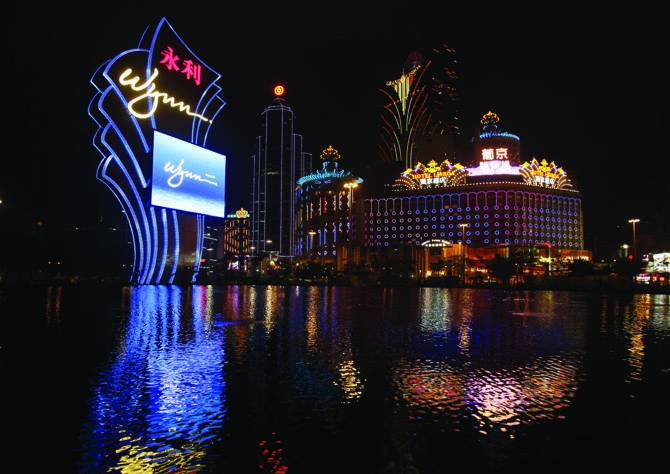 Gross gaming revenue unexpectedly fell 3.5% in July to 24.45 billion patacas (about $3 billion), according to data released yesterday by the Gaming Inspection and Coordination Bureau. Falling far below analyst estimates for a 2% increase, the July result cut short a two-month rebound and leaves year-to-date revenues down by 0.9%.

Macau casinos held up recently despite headwinds including trade war uncertainties and a weaker Chinese economy, with tourist arrivals at record levels helping to boost mass-market betting. But the high-roller segment has languished, and recent headlines about unrest in Hong Kong and a possible crackdown by China against junket operators may be scaring away more VIPs, say analysts.

“VIP demand deteriorated sharply toward the latter half of July with no obvious reason, in turn suggesting it could be a short-term blip amid heightened media attention on Hong Kong, given escalated protests, and junkets,” JPMorgan analysts led by DS Kim wrote in note yesterday.

While the results were disappointing, the analysts said they didn’t see the July miss as “thesis- changing” in the long term.

Investors showed little sign of alarm. A Bloomberg Intelligence index of Macau operators fell 1.1% yesterday, after dropping as much as 2.7% before the revenue data were released. Casino stocks have been volatile over the past few months, including a 20% drop in May. The index is still up 11% for the year, led by Melco Resorts & Entertainment Ltd. and SJM Holdings Ltd.

The picture for the industry was brightening recently amid strong tourism and signs that the retreat in the high-rollers segment may have touched bottom.

The city welcomed almost 20.3 million visitors in the first half of 2019, 20% more than in the comparative period last year, as the local government set its sights on delivering mass market diversification.

But gross gaming revenue slipped 0.5% in the same period and per capita spending tumbled, attributed in part to the same-day visitor segment growing four times as fast as overnight visitors. The result was a shortening of visitors’ average length of stay by 0.1 days.

UOB-Kay Hian analyst Robin Yuen said yesterday that the protests may have hurt visits from the Hong Kong side, noting that Sunday’s protest disrupted ferry service. That’s despite official Macau data showing that package tour arrivals from Hong Kong were up almost 50% year-on-year during the month of June.

While Macau tourist data for June show record levels, numbers for July aren’t yet available. Concerns are growing that the latest month may show a falloff, especially in tours from the mainland that often bundle Hong Kong and Macau into a single package.

High-stakes gamblers may also be staying away amid reports in mid-July that China is increasing scrutiny on junket operators that offer online betting.

Analysts have a restrained outlook for the months ahead, due to the regulatory risks and disruptions from further Hong Kong protests.

There is also the matter of the difficult August 2018 comparison base, which will frame even a very strong result this month as a year-on-year decline in percentage terms. Gross gaming revenue grew 17.1% in August 2018 to reach almost MOP26.56 billion, a result higher than that seen in any one month so far this year.

But while Yuen says August may be challenging, the UOB analyst sees revenue growth strengthening in the second half, especially if the intensity of the trade war eases. DB/Bloomberg