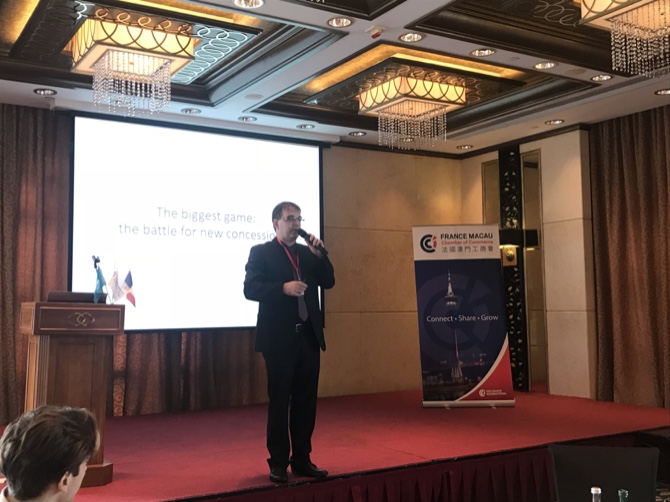 The local government’s decision- making process during the upcoming gaming concession will not be transparent, Taipei-based journalist Martin Williams claimed yesterday during a breakfast meeting organized by the France Macau Chamber of Commerce.

“There are various reasons why the application process [of the gaming concession] can’t be transparent,” said Martin Williams, who was the speaker at the event.

“The problem is that if you actually [measure] the quality of each applicant, if you review the process and all the numbers involved, it’s not going to explain why some applicants got a concession and others didn’t,” Martin Williams explained, further indicating that there are other influences involved in the gaming concession.

Martin Williams, who is also the Asia Editor for London and Washington-based Gambling Compliance, believes that “Beijing is in charge” of a soon-to-come gaming concession grant.

Besides the gaming concession’s transparency, Williams also noted the lack of ownership traceability within the Macau gaming industry.

“There has always been a concern about the lack of traceability of the ownership, the substantial owners. The substantial benefit is that junkets are often invisible. Clearly, that’s something that’s going to have to be addressed,” said Martin Williams, adding that “as long as the structure is kept stable, that’s the more important aspect.”

“But the thing I don’t doubt, and we are seeing this from the DICJ’s crackdown on junkets, is that, just because the government is taking greater care with its handling of junkets, it doesn’t necessarily mean that the public or the media will get more information about it,” said Williams.

“I think the government would tend to prefer to think that the government itself is perfectly capable of doing that monitoring on the basis of legislation and on the basis of its practice,” the journalist voiced. He also noted that he does not see any particular change in the law amendment regarding junket promoters.

Talking about the parties involved in the gaming concession process, Martin Williams said “my first piece of advice would be to go to the Hong Kong and Macau Liaison Office.”

“Learn all about them, learn about the China Liaison Office people here. Those are the fundamentals,” said Williams.

Having spoken on gaming in Macau, Hong Kong, Singapore, Tokyo, London, Barcelona and Taipei, the journalist finally remarked that the Chinese lottery is much bigger than Macau casinos, and it is growing.