Gaming | VIP and junkets in ‘near broken’ state – Standard Chartered 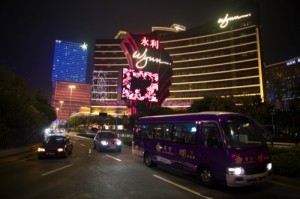 Standard Chartered has said that Macau’s VIP and junket models, which steered the city’s massive growth in revenue, is in a “near broken” state and that no short or long-term solutions will be able to help bring them back to health.
According to the UK-based bank, junkets are facing heavy tightness in funding and liquidity that has prevented them from obtaining any sort of capital. Without capital, these same junkets are facing weaker rolling volumes and margin pressure. “We see these issues persisting well into a China easing scenario,” Standard Chartered added.
According to the source, some junkets have even resorted to selling properties in Macau just to keep their books in order. The scarcity in VIP gamblers has also turned the junket industry into a survival-of-the-fittest jungle where the slow and weak are eaten up by those who remain aggressive in putting high rollers into casino seats.
Standard Chartered has cut EBITDA estimates for Macau operators by an average of 21% in 2015 and 26% in 2016. It has also reduced its share price targets by about 29%, giving an estimate of 12 to 20% decrease from the current street consensus, which appears overly optimistic. Gross gambling revenue (GGR) forecasts were also reduced, seeing a contraction of 2% next year, followed by growth of 10% in 2016 and 10.5% for 2017.
The city’s year on year GGR is likely to drop from 17% to 21%, the sixth straight month of declines, said financial analyst Sterne Agee.
Revenue growth in Macau has been hit hard by a crackdown on corruption in mainland China, which has led high rollers to curb extravagant behavior to avoid appearing on Beijing’s radar. The general slowdown in the Chinese economy and tight credit is also affecting spending habits.
As of November 23, Macau’s gross gambling revenue sits at MOP24.3 billion.MDT/Calvinayre.com